The security firm SplashData publishes its list of the 25 worst passwords of 2013.

Thanks to the Adobe security breach last year, which exposed the IDs and encrypted passwords for 38 million Adobe.com users, we now know that the most commonly used password on the Internet is "123456."

As such, SplashData, a computer security firm that makes password management apps, recognized "123456" as the "Worst Password of 2013." The company says its list of the 25 worst passwords is based on the frequency of passwords found online as a result of disclosures -- largely but not exclusively from the Adobe incident. The ease with which these passwords could be cracked using brute-force methods is not taken into account.

A two-time runner-up, "123456" has dethroned "password," a local favorite due to its jaw-dropping obviousness and its always amusing self-referential nature. It slipped only to No. 2 on the list and could regain the top spot if consumer disinterest in security continues this year, as it has for decades. Computer buyers have neglected security more or less since personal computers became popular in the 1980s.

At No. 4, we find "qwerty," which, like "123456," consists of six characters of comparable obviousness -- someone figured having a password spelled out on the keyboard would make a convenient mnemonic. Why six characters? Perhaps in the vain hope of keeping out hackers who give up after exhausting their default configuration of five fingers. Another dismal password, "111111" (No. 7 on the list), also sports six characters.

The No. 5 password, "abc123," shows computer users mixing up letters and numbers. It's the start of a workable computer security strategy, though that's not enough to keep the password from being awful and obvious. 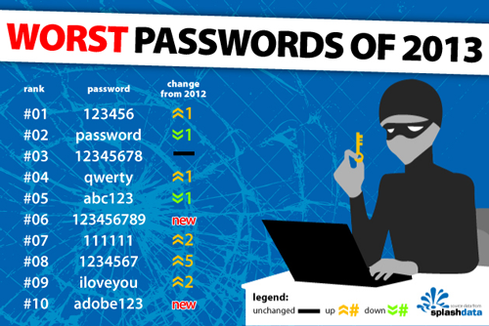 At No. 9, there's the unexpected but still insecure "iloveyou." Adorable though it might be, it suggests two people sharing a user account, which isn't really an advisable security practice. Alternately, it hints at someone with a misplaced affinity for technology who really should get out more.

This year will mark the 10th anniversary of the Bill Gates prediction "Over time, people are going to rely less and less on passwords." Finally, after a decade, the needle is starting to move. We're beginning to see ways to enhance the weak security offered by passwords. Google and Twitter are using two-factor authentication. Facebook offers something similar with its Login Approvals. And Apple has introduced the Touch ID biometric authentication system with its iPhone 5S.

Even so, expect another such list at the end of 2014. Bad passwords will remain an issue for years to come.

We use so many cloud and network based systems now, the number of passwords just for work has grown to nearly two dozen.  Add the accounts I use for managing my families personal affairs and devices ("What password did I settle on for the XBox?"), plus media sites for research, social sites, etc, and the number is literally close to 100 sites that have passwords.  I need a spreadsheet (encrypted, but probably not unhackable) to keep track of it all. Can't wait till Bill Gates prediction comes true.
Reply  |  Post Message  |  Messages List  |  Start a Board

These systems aren't perfect and won't cover every eventuality, but there are a number of them to choose from. Think about it: If you take a user from having to remember 12 complex passwords to having to remember three or four (the pw manager and noncompatible systems) that's a huge improvement. Plus, some offer niceties like two-factor authentication.

It's a technology problem. Why not use technology to solve it?
Reply  |  Post Message  |  Messages List  |  Start a Board

Check out an idea from cartoonist John Klossner. It might not totally solve your problem, but I guarantee it will put a smile on your face. Cartoon: Forgot Password? Click here.  (Paste url into your browser)

An officially sanctioned password manager, with training, may be the answer here. Given BYOD and that SSO seems to be a pipe dream, IT has to try something. What's the downside of rolling out a password manager?
Reply  |  Post Message  |  Messages List  |  Start a Board

I have 26 work-related passwords -- some used daily, some used quarterly or less often -- written down on a sheet of paper I keep in my desk. How many passwords do you have to remember to do your job?
Reply  |  Post Message  |  Messages List  |  Start a Board

The problem for users, of course, is remembering their myriad complex passwords. Enter password managers. We offered a nice roundup here: http://www.informationweek.com/security/risk-management/10-top-password-managers/d/d-id/1109759?
Reply  |  Post Message  |  Messages List  |  Start a Board

Most of the websites I visit require a capital letter, a number and a symbol in the password. It's annoying and tedious, but that's also probably why I have yet to be hacked.
Reply  |  Post Message  |  Messages List  |  Start a Board

Honestly, at some point, if you're that dumb and/or lazy, you deserve to be hacked. That goes for enterprises that don't set standards to keep people from using "password" or "12345678."
Reply  |  Post Message  |  Messages List  |  Start a Board
InformationWeek Is Getting an Upgrade!