The Galaxy View sports an enormous screen, Android, and a kickstand for tabletop viewing.

Samsung today announced the Galaxy View, an oversized tablet intended for entertainment and media consumption. The gigantic screen puts the Galaxy View in a league all its own.

The Galaxy View is optimized for watching video, according to Samsung. The 18.4-inch display has full HD resolution (1920 x 1080 pixels), making it ideal for today's movies and television shows. The mega-tablet has 4-watt stereo speakers, which means it can push plenty of air to fill a room with sound. The View includes a built-in kickstand so it can stand up on its own. The stand supports two different viewing angles. 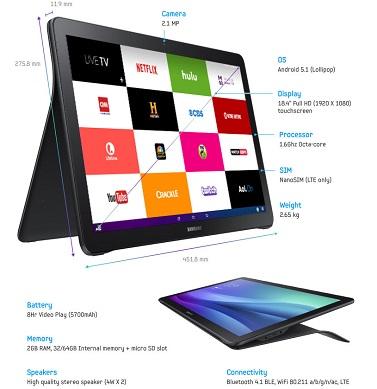 "At Samsung, we are committed to creating new possibilities and bringing our consumers the best mobile experience," said JK Shin, CEO and head of Samsung's IT and mobile business, in a statement. "We are very excited to introduce the new Galaxy View, providing an entirely new way of consuming mobile video and entertainment."

The View is powered by a 1.6-GHz octa-core processor, though Samsung didn't say if the chip is its own Exynos brand or that of another chipmaker. The tablet has just 2GB of RAM and comes in 32GB and 64GB variants. Both models include support for microSD memory cards. Connectivity options include 802.11a/b/g/n/ac, Bluetooth 4.1 Low Energy, and LTE, if so desired. Video calls are possible thanks to the 2.1-megapixel camera positioned above the screen. Samsung packed a 5,700mAh battery into the Galaxy View that is good for up to 8 hours of video playback.

The Galaxy View is enormous. It measures 17.8 by 10.85 inches and weighs in at a whopping 5.84 pounds. To put this into perspective, the iPad Pro -- which has a much smaller 12.9-inch screen -- measures 12 by 8.7 inches and weighs just 1.57 pounds. Clearly, the Galaxy View is not meant to travel much. In fact, Samsung envisions the tablet sitting on your kitchen counter, or propped up in a conference room.

Samsung isn't the first to bring an extra-large tablet to market. Toshiba fielded a 13-inch tablet a couple of years ago, and more than a few Windows tablets have displays in the 12-inch and 13-inch range. The nearest competitor to the Galaxy View is Alcatel's Xess, tablet, which boasts a 17.3-inch display. Like the Galaxy View, the Xess is meant for countertop viewing.

Sadly, Samsung did not say when the Galaxy View will go on sale, nor how much it will cost. It will probably reach stores ahead of the holidays. Don't expect it to be cheap.

Eric is a freelance writer for InformationWeek specializing in mobile technologies. View Full Bio
We welcome your comments on this topic on our social media channels, or [contact us directly] with questions about the site.
Comment  |
Email This  |
Print  |
RSS
More Insights
Webcasts
What We Can Learn from Sports Analytics
Strategies for Success with Digital Transformation
More Webcasts
White Papers
Presenting Your Cloud Security Strategy to the Board
Transforming the Corporate WAN: Enterprise Network Insights
More White Papers
Reports
How Data Breaches Affect the Enterprise (2020)
The ROI Of SD-WAN: Not Just A Numbers Game
More Reports

THat's what I like about windows... it has a lot more features when you play with it.

You can take any windows tablet and pair it up with a Miracast enabled devices, or use the Microsoft display adapter.
Reply  |  Post Message  |  Messages List  |  Start a Board

The price factor could be one reason why the product would do well or not do well in the market. Hence Samsung should be more careful on this.
Reply  |  Post Message  |  Messages List  |  Start a Board

@mejiac – I wish they had windows on this tablet just because its then great for business presentations.
Reply  |  Post Message  |  Messages List  |  Start a Board

Great article. I think having a big screen tablet is great for both business and personal use. Have Samsung though of the portability of the device is questionable.
Reply  |  Post Message  |  Messages List  |  Start a Board

@mejiac. Yes the price factor may govern public opinion. People might buy it based on an attractive price, just like people buy iPhone although they know the iPhone S version is around the corner and is probably more powerful than the iPhone.
Reply  |  Post Message  |  Messages List  |  Start a Board

Exactly, there are several products today that can easilly provide what Samsing is "trying" to accomplish, which to be honest I don't know what that is.

The market is already both crowded and has various options available.

I think they main distinguisher would be the price point that samsung sets, which could easilly be the defining factor if this is a hit or miss (but I think it'll be a miss given the current price point of samsungs current line of tablets)
Reply  |  Post Message  |  Messages List  |  Start a Board

Really Samsung? As if 6-8 inches tablets weren't enough. You call this "not a winner", I call this " unnecessary ". Enough job of viewing can be done on a good Samsung tablet. If I wanted a tv I would have gone for a Samsung smart tv which can double as a pc screen.
Reply  |  Post Message  |  Messages List  |  Start a Board

I think what Samsung is doing from a concept point of view is great.... providing an experience with focus in entertainment. But I don't think they have a winner here.

First, the concept isn't new, Google, Apple and Microsoft have been providing this already (many micro PCs can be easilly connected to your TV and you'll have a full blown PC avaiable, add some apps to it and you're good to do)

I like the idea of everything in a nice package and it being touch... but do you think folks will sit around in a room around an 18 inch screen? This is where I think the draw back will be (given it'll probablly have a price tag that's not so attractive).

Also, the fact that it's running android is another concern on my end.... I can buy a Chromecast for little to nothing and have the same apps that this device will probably provide.

I also think that this concept is more something that should be aimed at embedding into TVs (is there today, but still clunky).
Reply  |  Post Message  |  Messages List  |  Start a Board
Editors' Choice
Hot Topics