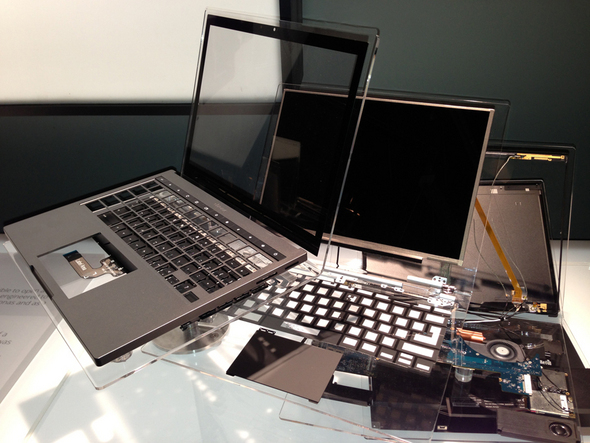 Google's ambitions for Chrome OS laptops used to be modest. Google positioned them as second or third computers, devices to augment a primary PC. Chromebooks were sold as something that OS X and Windows PCs arguably were not: affordable, manageable and secure.

But the latest Chromebook comes with a different pitch. The Chromebook Pixel, introduced at a media event in San Francisco on Thursday, aspires to compete with leading portable computers, such as Apple's highly regarded MacBook Air and its higher-end MacBook Pro.

As such, it sports an Intel i5 processor, the same processor found in the MacBook Air. And it features a 12.85-inch, high-resolution 2560 x 1700 touchscreen display. At 239 pixels per inch, the Pixel's screen has the highest resolution on any currently shipping laptop, Google claims, higher than the 220 ppi MacBook Pro with Retina display (220 ppi until late 2012, then 227 ppi).

The Chromebook Pixel is at once a proof-of-concept, intended to push partners Acer, HP, Lenovo and Samsung to outdo this Google-branded device, and a declaration of design prowess. The Pixel is undeniably attractive and elegant. In contrast to the plastic $249 Samsung Chromebook, the aluminium-body Pixel feels like it's built to last.

Google's engineering competence shows. The display, for example, can be lifted from a closed position easily with a single finger, yet won't open on its own, thanks to magnets that hold it closed. To maintain the appropriate level of resistance, the display hinge is supported by a torsion bar that assists attempts to open the device and then pushes back against the pressure of fingers on the open touchscreen. A lot of thought went into the Pixel.

Google's attention to aesthetics is obvious too. Unlike the MacBook Air and MacBook Pro, the Chromebook Pixel has no visible screws. Its body is unblemished anodized metal. Google has even omitted the icons typically used to designate laptop ports, a level of minimalism Apple has yet to embrace.

While some no doubt will prefer the curved aesthetic of the MacBook Air and Pro to the harder-edged Pixel, it's fair to say that Google is now at least playing in the same league as Apple when it comes to design. And that's something Apple should worry about.

The Chromebook Pixel starts at $1,299 for the Wi-Fi model, which can now be ordered and is scheduled to ship next week. If you want 4G LTE connectivity from Verizon, the price rises to $1,449, with shipping scheduled in April.

Though the LTE option costs more, Verizon's data plan doesn't require payment when cellular data service isn't used -- you can buy access for a day when necessary, without any subscription fee.

The Pixel also comes with two noteworthy free offers: 1 TB of Google Drive storage at no charge for three years (a $600 value annually) and 12 free Gogo in-air Internet passes, for accessing the Internet while on a plane.

Now dig into our slideshow to take a closer look at some of the Pixel's highlights. The clarity of the screen is best seen in person.