Apple is dealing with the crappy mapping launch by firing the manager in charge of the software. But can this repair the damage that is already done and can Apple ever catch up to Google?
Boonsri Dickinson
Associate Editor of BYTE
November 27, 2012

Now that maps manager Richard Williamson has been fired, can Apple save its mapping software?

According to Bloomberg, Apple reportedly fired Williamson, who handled the much-ridiculed Apple maps app. To fix all the flaws in the mapping software, Apple is working with mapping consultants and digital mapping company TomTom.

After using Apple maps for a month, I sure hope so. 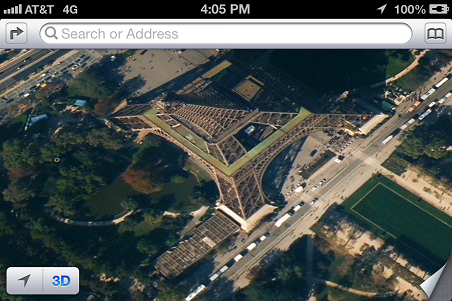 This is a serious image problem for Apple. I have friends who won't download the iOS 6 because they want to keep Google maps. Apple is famous for getting users to update software quickly.

Although, ironically, Google has been known to release products in beta to see what sticks, Apple usually waits until the product is done. That's why, when Apple released the buggy mapping service, preloaded in iPhone 5s and baked into iOS 6, consumers and app makers such as Uber that depend on the native mapping service complained about its inaccuracies.

Apple consumers, a bring-your-own kind of crowd, have been finding ways to get by. There are several other mapping options including Embark, which will help with public transit inquiries, according to Businessweek. I can access Bing Maps or Google Maps using my browser on my iPhone 5.

Our own review of the Top GPS Apps For the iPhone has been very popular lately.

The issue isn't over a few lines of code, though -- it's more about the hunt for big data. As Forbes said, Google got an early start back in 2005 when it launched its mapping software.

Google is really a mapping company, Apple is not. Google is working on Google Glasses and self-driving cars -- computing platforms that extend beyond smart phones, all based on geo-location. And clearly Google is winning here.