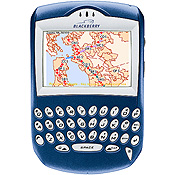 BART will initially make eight BlackBerry 7520 handhelds available to patrol officers. In addition to MapInfo software, the handhelds will also run Aether Systems' PocketBlue software, which lets them query law-enforcement databases for license plate and criminal history information. The department has no plans to deploy additional handhelds until it finishes deploying 50 laptops armed with mapping software to its patrol cars, a project expected to be completed by the end of 2006.

"In 2005, there's no logical reason for technologies to be separate and cumbersome," says Carissa Goldner, BART's computer-assisted dispatch and records-management systems administrator. "We're looking to give officers as many resources as possible while they're out in the field."

Although on a smaller scale, BART's wireless deployment resembles a Jersey City Police Department project I wrote about recently. In Jersey City, the department is launching a $15 million IT project to implement a new high-speed mobile network and handheld computing devices that ensure every officer has access to critical information in real time.

It's nice to know that the good guys are as well armed (or at least better informed) as the bad guys.

How does your mobile workforce benefit from information delivered on the fly? Have your investments in wireless paid off?