Microsoft has announced the general availability of Word, PowerPoint, and Excel across Android smartphones. This rollout marks the end of a five-week preview period.

Delivering Office to Android devices is an ongoing process. In mid-May, Microsoft debuted the public preview of Office for Android smartphones. The launch followed a year of development efforts to transform Office from a desktop app suite to a cross-device platform.

During this preview period, Office apps were tested on more than 1,900 Android smartphone models across 83 countries. Based on feedback from thousands of users, Microsoft made it easier to connect with third-party storage platforms like Box and Google Drive. It also simplified the process of navigating commands within each app.

The Android-compatible editions of Word, Excel and PowerPoint were designed to pack familiar features of Office in a more compact device. For example, navigation and menu options are at the bottom of the screen to eliminate hassle in reviewing and editing documents.

Android smartphone users who download the Office apps will benefit from a few nifty updates: 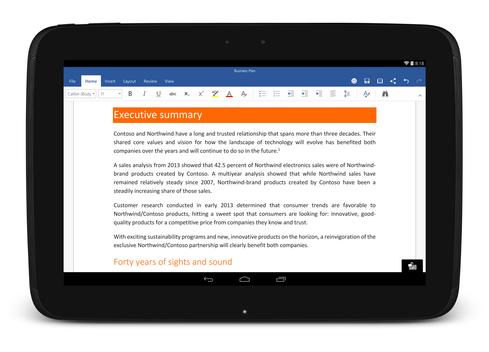 Further, Microsoft has partnered with more than 30 OEMS across the globe including Sony, Samsung, and LG to pre-install Office for Android apps on their devices.

Android tablets received the full version of the Office suite in January 2015 following a three-month preview period that generated more than 250,000 downloads of Word, PowerPoint, and Excel across 500 device models.

Kelly Sheridan is the Staff Editor at Dark Reading, where she focuses on cybersecurity news and analysis. She is a business technology journalist who previously reported for InformationWeek, where she covered Microsoft, and Insurance & Technology, where she covered financial ... View Full Bio
We welcome your comments on this topic on our social media channels, or [contact us directly] with questions about the site.
Comment  |
Email This  |
Print  |
RSS
More Insights
Webcasts
The Failures of Static DLP and How to Protect Against Tomorrow's Email Breaches
Protecting Your Enterprise's Intellectual Property
More Webcasts
White Papers
Ahead of the Curve: Accelerate Cyber Response with DNS Insights
Frost Radar: Global Threat Intelligence Platform Market
More White Papers
Reports
The State of Cloud Computing - Fall 2020
Building an Effective Cybersecurity Incident Response Team
More Reports

I have to say that it absolutely amuses me to the nth degree to see that in order to be even a little bit relevant, MS has had to resort to giving away its flagship office suite for free.
Reply  |  Post Message  |  Messages List  |  Start a Board

@Sunita I agree with you. I think if windows have released the package they must have kept these problems in mind. I believe the package must not be fully loaded or have full loads which might not consume that much RAM. In my opinion we have to wait and see what this release has in store for us. What do you say.
Reply  |  Post Message  |  Messages List  |  Start a Board

@Angelfuego - Word is in fact available for iPad, but it doesn't have all of the gusto of the full-blown version. It is adequate for the types of things you would expect to do on the go...
Reply  |  Post Message  |  Messages List  |  Start a Board

Now this is good news. The install package for android devices may be huge so the Office might take up much RAM.
Reply  |  Post Message  |  Messages List  |  Start a Board

Wow, I love that Word, Excel, and PowerPoint has expanded its capabilities to Androids. This is great news!! It is about time! Now I really can work on the go with a very compact device. I doubt it would be good for my eye sight though. Last I heard, you still can't use Word on an iPAD. Is that true? I heard Pages is the closest thing comparable to it.
Reply  |  Post Message  |  Messages List  |  Start a Board
Editors' Choice
Hot Topics