50%
Tweet
The "99 Days of Freedom" campaign suggests that a Facebook hiatus could make you happier. Will you accept the challenge?

Love it or hate it, Facebook has become part of our everyday lives: More than 802 million people log on daily and spend 17 minutes onsite. But if a three-month hiatus from your all your friends, photos, and posts meant you'd be happier, could you do it?

One Dutch nonprofit has challenged Facebook users to do just that: Log off of Facebook for 99 days and participate in "happiness surveys" to determine whether their mood improves.

The 99 Days of Freedom initiative stemmed from Facebook's controversial experiment in which it tinkered with users' news feeds to determine whether it could change their emotional state.

"Like a lot of Facebook users, many of us were bothered by reports of secret mood experiments," said Merijn Straathof, art director of Just, the creative agency behind the challenge. "As we discussed it internally, we noted an interesting tendency: Everyone had at least a 'complicated' relationship with Facebook. Then someone joked, 'I guess that the real question is, 'How do you feel when you don't use Facebook?' There was group laughter, followed by, 'Wait a second. That's a really good question.'"

The 99 Days of Freedom initiative doesn't suggest that you quit Facebook forever, only that you pledge to take a three-month hiatus. In those three months, you could bank more than 28 hours of free time that you otherwise would have spent on Facebook, it said. 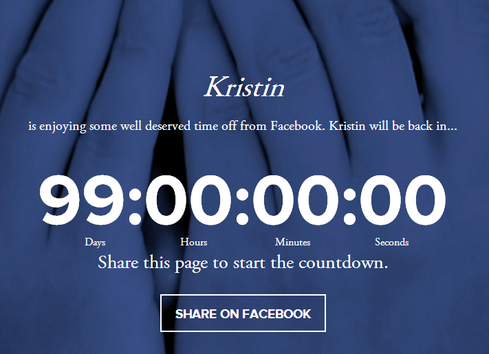 If you join the challenge, the 99 Days of Freedom website encourages you to change your profile picture to a "time-off" image and publish one last status update -- a link to a countdown displaying how much time remains until you log back on.

If you pledge to participate, the initiative will check in with you at the 33-, 66-, and 99-day mark and ask you to participate in "happiness surveys" to gauge your mood. Results will be posted on their website, which will also feature a message board where you can share accounts of how your Facebook hiatus is impacting your life, it said.

The Quit Facebook Day website, which still accepts commitments to quit, has racked up fewer than 41,000 pledges to quit since it launched in 2010. So far, only 7,000 people have pledged to participate in 99 Days of Freedom, according to a counter on the initiative's website.

Straathof said that this experiment isn't intended to be anti-Facebook, though some people may join to protest it. "Facebook is an incredible platform -- we're all fiercely loyal users and we believe that there's a lot to love about the service," he said. "But we also feel that there are obvious emotional benefits to moderation. Our prediction is that the experiment will yield a lot of positive personal experiences and, 99 days from now, we'll know whether that theory has legs."

Could you quit Facebook -- either temporarily or permanently? What would you -- and wouldn't you -- miss the most?

@Joe I agree entirely, but you'd be surprised how many emails I get from readers and how many friends ask me to help them with their settings. It's easy for me since I cover Facebook, but I understand why it's confusing to others. Maybe I should start charging. :-)
Reply  |  Post Message  |  Messages List  |  Start a Board

@PaulS681: Well before the days of separate, individual profiles, my Netflix recommendations got all screwed up when I let my girlfriend use my account to watch her chick flicks and Victorian dramas.
Reply  |  Post Message  |  Messages List  |  Start a Board

This make me rememeber the days of Tivo where it would pick shows it think you liked based on what you watched/recorded.There was  apretty funny King of Queen episode on that.
Reply  |  Post Message  |  Messages List  |  Start a Board

One of my good friends left Facebook a couple years ago when she was looking for a new job because figuring out her privacy settings wasn't worth it to her. Now, though, she uses both Instagram and Twitter. Why?  Either your profile is public or private. Something to be said for simplicity.
Reply  |  Post Message  |  Messages List  |  Start a Board

@Kristin: The only personalized online experience I have ever particularly enjoyed (that I can recall, anyway) was old-school Netflix, with its once-excellent recommendation algorithm.

Gone are those days, however.  Now instead the site just insists on pushing a bunch of shows and movies I have no interest in on me.  It's pretty disgusting...and if there was better game in town for online TV show-watching, I'd switch at the drop of a hat.
Reply  |  Post Message  |  Messages List  |  Start a Board

@Angelfuego: There have indeed been numerous reports of teens abandoning Facebook -- seeing it as the more boring mainstream social site that their parents use -- for several other social networks.  Snapchat, Instagram, Twitter, and social question sites have become much more popular among that demographic.
Reply  |  Post Message  |  Messages List  |  Start a Board

I myself have witnessed several Facebook friends announce they were deleting their Facebook accounts once and for all...only to see them crawling back a month or two later.

The day I decide to quit Facebook for good, there will be no big announcement from me.  I'll just be gone.
Reply  |  Post Message  |  Messages List  |  Start a Board

@Susan, That is interesting. I wonder if the younger users are switching to another form of social media instead of Facebbok, if they are just withdrawing from social media all together, or if the younger generations are steering away from being first time Facebook users.
Reply  |  Post Message  |  Messages List  |  Start a Board

I went on a vacation and not connecting to Facebook felt great.  I'm not a compulsive Facebook user.  In some cases, many people use Facebook obsessively, they post their mundane activities on it.  Personally, if one is to keep up with family and friends who live far away its great other wise. Moderation has always been my rule.
Reply  |  Post Message  |  Messages List  |  Start a Board
Page 1 / 5   >   >>
Editors' Choice
Hot Topics