From the demonstration room to the 'handshake room.'
Chris Murphy
Editor, InformationWeek
December 02, 2010 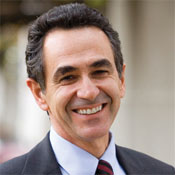 There's a room in Procter & Gamble's headquarters called the "handshake room." That's not its nickname--"handshake room" is etched on the door, lest anyone forget why they're there. It's a small room with two video screens and a dozen seats where business leaders gather for demonstrations--everything from technology tools to new consumer products or package designs. And if the project's a go, to shake on it and agree on how to charge ahead.

It's part of P&G's "solutions space," a deceptively simple-looking part of the headquarters where employees brainstorm and demonstrate new ideas to change how the businesses runs. There's the "demonstration room," where larger groups can cook up ideas using a floor-to-ceiling projection screen, and then break the room into smaller sections to hash out refinements. On a recent day, the finance team was there discussing ways to transform how P&G trades funds.

The "engagement room" lets an exec try out a prototype--say, of a new employee dashboard or videoconferencing system. A small usability room contains an eye-tracking machine, which records where a person's eyes go when viewing a Web site, business intelligence cockpit, product label, or other focal point.

Finally, there are "vignettes," three areas set up to look like a living room, a commuter train, and an office, separated only by temporary walls, to show how a technology could be used in--and across--various environments. "You don't have to say 'Imagine you're at home.'" says Michael Williamson, who runs the space.

It helps for people to physically move from space to space based on the innovation phase they're in, Williamson says. But all of it is built with the idea of "how do we provide a unique environment to get creative ideas flowing?"