The real magic of robots and the Internet of Things is happening right now at Amazon's vast fulfillment warehouses in the US. See what it's all about, and learn how simple robotics can transform your organization's logistical needs.

While there is no shortage of stories about the future potential of Amazon's drone delivery program, the real magic of the Internet of Things (IoT) is already happening at Amazon's vast fulfillment warehouses in the US. Thousands of robots in these locations gather merchandise for individual orders.

Joseph Durham, manager of research and advanced development at Amazon Robotics, talked about how the division got started during a presentation at the first annual IoT Solutions World Congress, held Sept. 16-18 in Barcelona. It all began with a small startup called Kiva Systems in North Reading, Mass., which was acquired by Amazon in 2012.

Kiva Systems had devised a system for office supplies retailer Staples that applied small robots -- like the ones used to clean floors -- to move racks of merchandise around the warehouse and help prepare online orders. Staples started with 60 robots in 2006 and grew to 500 the following year. The robots at Staples' facility have been running nonstop ever since.

The Amazon robotics warehouse system looks rudimentary compared with the huge, arm-whirling automated robots that can be seen at some storage facilities or on automaker assembly lines. But the challenge for the eCommerce supply chain is very different from one for a factory assembly line.

On an assembly line, robotics are used to repeatedly move selected pieces to build the same car over and over again. For Amazon -- like other retail fulfillment operations -- every online order is unique. Web retailers manage thousands, and sometimes millions, of different products, all with varying weights, sizes, and shapes. 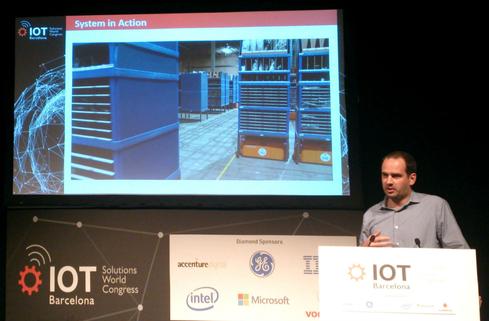 Previously, to fulfill an order warehouse workers had to roam the floor scanning racks of merchandise in search of each specific product, according to an article in MIT Technology Review.

Kiva Systems developed a way to use robots to move the racks, or "pods," on which the products are stored, instead of having them search out and move the individual products themselves. Storage pods can hold hundreds of different types products, but the size and shape of each pod is exactly the same.

The robots are controlled by a centralized computer using a secured WiFi network for communication. They have two powered wheels that allow them to rotate in place, IR for obstacle detection, and floor cameras to read QR codes on the ground. The QR codes are used by the robots to determine their location and direction. When the robots have been working for an hour, or are running low on battery power, they go to power stations and plug in for a quick charge.

The key to the success of the robotic warehouse is not the robot, but the brains behind the system. Amazon processes hundreds of orders per second. When the customer clicks the final "Buy" button, the order enters a sophisticated fulfillment system, which locates the products in different Amazon delivery centers. An order of several products might be shipped from several locations, depending on product type and availability. Then the system assigns priority depending on the customer's delivery preference -- a "Super Saver" order might wait several hours, while an AmazonPrime order must be shipped the same day. Once priority is determined, the robots start to locate and move pods to the assigned packing station to prepare the order for shipment.

The diminutive Amazon warehouse robot looks like it could vacuum your floors when it gets home from its day shift.

The robots keep workers at the warehouse fully employed, according to Durham. The system is designed to optimize robot operation and workstation load, so when a worker is not packing an order, he has time to restock shelves or conduct an inventory check of a pod brought in by a robot.

To encourage workers to see robots as companions, each unit is given a different name by an Amazon employee, and the name is entered into the system, so workstation workers can refer to them by name instead of a serial number.

Entire robotic warehouses can be relocated over a single weekend. That process used to take weeks, according to Durham. Amazon has already had to do this when it has needed a larger fulfillment center for one of its key locations. Robots were reprogrammed to deliver pods, by type of merchandise, to predetermined loading bays, where they ship themselves, along with the pods, directly to a new facility. Once in the new location, the robots immediately start to move the pods within the warehouse and prepare for normal operations. According to Durham, the entire process takes less than 72 hours.

Durham declined to reveal the cost of the robots, but hinted that Amazon is considering opening other robotic warehouses abroad. "We are studying the possibility to use them in Europe," he said. "But we have different frameworks regarding safety standards and regulations, as well electrical and measurement standards."

When asked about the Drone Delivery program, Durham said that it faces different technical and regulatory challenges than the factory robot program. What's more, it's unknown whether the public will accept drones flying around homes and businesses. "It is not a program we are currently working on," Durham said. "I believe the original conception that has been discussed in the press will not be the way the program will work in the near future."

Meanwhile, Durham said, Amazon's robots have collectively moved more than a billion pods to workstations, and have traveled 93.2 million miles -- almost the distance from Earth to the Sun.

Pablo Valerio has been in the IT industry for 25+ years, mostly working for American companies in Europe. Over the years he has developed channels, established operations, and served as European general manager for several companies. While primarily based in Spain, he has ... View Full Bio
We welcome your comments on this topic on our social media channels, or [contact us directly] with questions about the site.
Comment  |
Email This  |
Print  |
RSS
More Insights
Webcasts
Detecting and Preventing Insider Data Leaks
Hybrid Cloud: The Great Balancing Act
More Webcasts
White Papers
Why Add Security to Your Skill Set and How to Do It
Sunburst: Impact and Timeline
More White Papers
Reports
The State of DevSecOps Report
How IT Security Organizations are Attacking the Cybersecurity Problem
More Reports

Probably the most important factor is ROI for implementing robots. Two years at $30-40K per person eliminated is a rule of thumb for estimating. Amazon most likely bought Kiva to reduce their costs and insure their supply of this technology without interference from competitors also buying from Kiva.
Reply  |  Post Message  |  Messages List  |  Start a Board

These "robots" are not really new technology. Similar vehicles have been used in warehouse and in manufacturing for over 30 years. They're called AGVs. Amazon using them isn't new and their robots aren't connected to the Internet, just to the local Amazon warehouse control system. The IoT buzz word is being applied much too broadly.
Reply  |  Post Message  |  Messages List  |  Start a Board

There are still many jobs that robots can't do. I think anything that will support workers in handling such completed job the better.  I'm sure once Amazon fixes all the bugs, I'm sure other companies like Walmart will follow suite in making their operations more efficient with robots.
Reply  |  Post Message  |  Messages List  |  Start a Board


". That is, if it works in just one warehouse, it's not cost effective. If it works in warehouses all over the world, then you can afford to implement such a system"

@Charlie: Yeah, like most technologies, you do need a scale for cost-effective implementation. The initial investment is high and it needs to be divided amongst a base to reduct cost per unit. I guess this goes without saying and every company is affected by it.
Reply  |  Post Message  |  Messages List  |  Start a Board

"I believe Amazon is keeping the info for themselves for good reason."

@Pablo: I think it makes sense to maintain it is a secret project. It is something that millions of dollars have been invested into and hence it makes sense to prevent some other company from capitalizing on the research and bringing it to implementation before Amazon does. They are planning to use it as a competitive advantage.
Reply  |  Post Message  |  Messages List  |  Start a Board


"But let's face it, some roles probably wouldn't be best suited to a robotic interface, especially in customer service. "

@Stratustician:  I think it depends on what the purpose of the representative is. If the idea is to have someone to guide customers and engage in a discussion, then the robots will fail. If the idea is to only inform the customers then a robotic interface makes sense provided that it's also cost effectvie.
Reply  |  Post Message  |  Messages List  |  Start a Board

Don't get me wrong - I'm nothing if not amazed by the scale of this deployment. Just like with AWS, I wouldn't be surprised if Amazon is at the forefront of something that's set to become the standard. The fact that most of us didn't even know it was going on (I wasn't, at least) adds to the cool factor substantially. I think you're right about the cost, too - in software terms, this seems more like a closed alpha test.

You know, I've worked in a retail environment in many capacities. Although those might be the first jobs many would expect on the chopping block in the automated future, I've found there's a surprising amount of nuance there that robots might not be suited to (for some time). How does a robot stocker handle spills or detect damaged items? How can it tell whether a shelf is overfilled or if more could be fit by re-arranging? Can it tell if a load is stacked unsafely, and not handle it? These are very subjective decisions that human workers make minute-to-minute. Of course, as you mentioned, there's also the customer service component.
Reply  |  Post Message  |  Messages List  |  Start a Board