SEARCH
A minimum of 3 characters are required to be typed in the search bar in order to perform a search.
Announcements
Event
Enterprise Connect 9/27-9/29 - Time is running out, secure your FREE Virtual Pass today!
PreviousNext
Team Building & Staffing
Feature

Plumbing services company Roto-Rooter's most important employees are those in the field, president and COO Rick Arquilla says.

"Our brand building comes from every time a customer service rep answers the phone and says, 'Roto-Rooter, how can I help you?'" Arquilla says. Even though Roto-Rooter is an established brand, "that only gets you the first phone call. Beyond that, it's up to the employees." 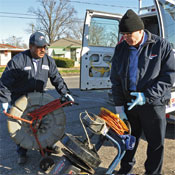 Arquilla recently got a first-hand look at how effective his employees are when he went on the CBS reality show Undercover Boss. Under the guise of filming a documentary about Roto-Rooter's 15th anniversary, the show's producers sent a camera crew out with Arquilla, who played the role of "Hank," the bumbling trainee. He cleared drains, unclogged sewer pipes, and worked in a call center-work that turned out to be harder than he expected. At one point, he struggled to perform a call center dispatching task because the computer screen was color coded and Arquilla is colorblind. That system happened to be one he helped design. "I guess I just never thought I'd have to do the job myself," he admits.The employees who were selected to show him their jobs were probably on their best behavior when the cameras were rolling, Arquilla concedes. Yet he was pleased to see they behaved little differently when the cameras were off.

Arquilla says he tries to spend time in the field asking employees about their jobs--what is and isn't working. The innovation he looks for is less at the level of big technological breakthroughs and more a matter of small process improvements. Yes, it's important to have technologists who can come up with new ways to automate processes, he says. But he's also cognizant of the employee who asked why filing a report on a snazzy new handheld computer took so long.

Innovation requires all kinds of risks, including just being willing to speak up when something isn't working, Arquilla says. Bigger innovations come with bigger risks, he says, and, in those cases, companies must think about how they treat people who gamble and lose. "Do they get whacked upside the head because they stepped outside the box, made a mistake, and cost the company some money? Or do you pick them up, dust them off, and say keep it up, keep innovating?" Arquilla says.

Roto-Rooter tries hard to find good people, but he doubts there's any perfect technique. No matter how good you are at interviewing, "I'd place the odds at 50-50 at best," he says. For that reason, he tries to do most of the hiring at the entry level, and then promote from within, "because you certainly should know your own employees better than external candidates."