How To Turn Data Into Stories - InformationWeek

0%
Tweet
When Yakult, a Japan-based maker of probiotic dairy drinks, put a data analysis tool into the hands of its sales people in The Netherlands, they swapped out stale spreadsheets for stories about how the product was performing in real time.

Fortran: 7 Reasons Why It's Not Dead
(Click image for larger view and slideshow.)

There is only so much a spreadsheet can tell you. In the case of Yakult, it was not enough to remain competitive in the Netherlands.

Yakult is a Japan-based maker of probiotic dairy drinks sold through supermarkets in 31 countries. And that is the tough part, as companies selling food products have to compete for shelf space in any supermarket they through which they sell. Any vendor that fails to maintain marketshare can disappear overnight if a retailer decides the shelf space can produce a greater return stocked with another product.

About a decade ago, Yakult was managing its Dutch market with Excel spreadsheets, generating simple graph tables for stats such as year-to-date sales and supermarket sales every four weeks, said Egbert Jan Vierkant, market analyst for Yakult in the Netherlands. "In those days, we realized there were new competitors entering the market," he said. "We realized we were vulnerable."

Yakult executives decided in 2006 to invest in business intelligence to maintain the company's competitive edge. "Spotfire was a completely unknown brand (at the time)," Vierkant said. Spotfire is a data visualization app from TIBCO Software, which can aggregate large amounts of data for query, analysis, and display.

Veirkant said the application is intuitive. "Even people with no professional background in data analysis, they get enthusiastic when they see it." he said.

Spotfire can render data as bar, fever, and pie charts, and can show scatter plots -- all standard tools of data visualization. "If you work with Excel only and you have lots of time, you are able to do the same analysis that Spotfire can do, too," Vierkant said. "The main difference is speed. Spotfire is 100 to 200 times faster than Excel."

Spotfire can render data geographically, plotting out information by the location of its origin. Veirkant used this feature to divide the Netherlands into 4,000 areas by which to analyze sales and distribution. "I know how many people live in each area," said. "We can target our marketing." 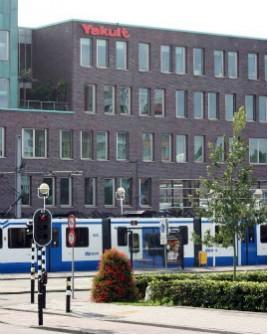 Yakult headquarters in The Netherlands.

"The main advantage is that [Spotfire] can enable the plotting of multi-dimensional data into one graph." Vierkant continued. For example, store sales can be shown as a scatter plot, with each dot colored to match a specific product, and varying the size of the dots corresponding with sales amounts. You can even designate one dot to represent current sales and a second to represent year-ago sales for comparison, he said.

In that manner, a lot of data can be gathered together concisely, Vierkant said. That enables Yakult reps to make good presentations to the supermarkets they visit. Instead of showing a bunch of PowerPoint slides, the rep goes straight to the data. "Spotfire turns data into stories," Vierkant said. "You don't want to talk data with retailers."

Two years ago, Yakult executives also decided to use a cloud-based version of Spotfire. Typically, there are security concerns about whether data should be taken from in-house storage and put into the cloud. But human error was viewed as the greater risk. "If I forget my laptop on the train, it is more likely than losing sales due to cloud storage," Veirkant said.

Many stakeholders were involved in the decision to deploy Spotfire, including Vierkant's manager, the division's managing director, and the IT director from the company's head quarters. Ultimately, though, the application enables Vierkant to run data sets without involving IT.

"I don't need our IT department any more," Vierkant said. “For data integration, analysis, visualization and sharing, no assistance of IT is needed at all … When I obtain new data, which I do often, I just add them to Spotfire myself in a few minutes. After that updating data requires only seconds."

Now data can be gathered from multiple sources, collected in one table, sent to the cloud. and shared with other Yakult executives elsewhere in Europe, he noted.

No application is perfect, however. Vierkant would like to see Bayesian analytic tools as part of Spotfire's features. Right now, Vierkant relies on R to do Bayesian analysis of Yakult data, which can be complicated.

Another limitation is Spotfire's ability to work with data cubes, which extract only a portion of the data from a database to respond to a query, according to Vierkant. Currently, a data query requires a SQL database to be loaded into a computer before analysis can begin.

William Terdoslavich is an experienced writer with a working understanding of business, information technology, airlines, politics, government, and history, having worked at Mobile Computing & Communications, Computer Reseller News, Tour and Travel News, and Computer Systems ... View Full Bio
We welcome your comments on this topic on our social media channels, or [contact us directly] with questions about the site.
Comment  |
Email This  |
Print  |
RSS
More Insights
Webcasts
Enterprise Database Strategies for 2020
Securing Active Directory the Way it Deserves
More Webcasts
White Papers
DevOps for the Database
Wired vs. Wireless LAN Solution
More White Papers
Reports
Online Threats -- and What Your Org Can Do About Them
[Special Report] Remote Network Management
More Reports

@jagibbon Definitely, that's a must for all forms of communication.
Reply  |  Post Message  |  Messages List  |  Start a Board

Infographics are great when they are done well. I've seen some that don't tell the story very well. I've even seen some that are really telling a different story than what the author intended. If you're going to rely on infographics to tell the IT story inside your company, make sure you have good communications resources to help craft the right messages.
Reply  |  Post Message  |  Messages List  |  Start a Board

@jagibbons  I couldn't agree more. That's why I much prefer infographics to videos. You have to sit through several minutes of narration in video to get the points you can take in within seconds by looking at the graphics.
Reply  |  Post Message  |  Messages List  |  Start a Board

Great point about context. Visuals often aren't enough by themselves. Most IT pros I know use too much language, though. If you can use visuals to accurately present in one page what might take four or five text-heavy pages, that's a good thing.
Reply  |  Post Message  |  Messages List  |  Start a Board

@jagibbons I like some visuals that let me know a lot at a glance. But I am always a bit wary of context. For example, someone I know leaves her money with some investment service that sought to prove she was doing well by showing return for 3 months. That makes me wonder what are they hiding because a typical benchmark is a year or even longer -- like the lifetime of the investment. Typically 3 month results are only shown as quarterly reports, not as the actual measure of performance overall.
Reply  |  Post Message  |  Messages List  |  Start a Board

Interesting question about a narrative. Narrative's are helpful, but for my stakeholders and business unit lead peers, pictures really are worth thousands of words. They want to see information visualized. Having the data and making sense of it in graphic form are two very different things, and often there is a huge chasm between the two. Tools that help take the many data points available and generate visuals to tell the story are game-changers for me.
Reply  |  Post Message  |  Messages List  |  Start a Board

I'm all for liberation as long as it doesn't introduct signficant security risks or function in a silo that can't be plugged into other parts of the business technology landscape. If IT is involved in the decision and implementation and then is able to let the non-IT folks use the tool, that is nearly the perfect situation in my opinion.
Reply  |  Post Message  |  Messages List  |  Start a Board

Any tool that liberates a user from dependence on IT I'm all for.

This is a great exmaple of that. Users don't like to depend on IT. And IT doesn't neccesarily want to hand-hold.

This is a good story that shows users are increasingly capable of using complex tools as long as IT gives them reign.
Reply  |  Post Message  |  Messages List  |  Start a Board

From the title I thought it was an application like Narrative Science, which renders data into textual accounts that can be made into reports, blogs, presentations, etc. Here it seems to be more about data visualization with different types of graphs and charts. Does it also provide narrative?
Reply  |  Post Message  |  Messages List  |  Start a Board
Editors' Choice
Hot Topics

IT Career Paths You May Not Have Considered Lisa Morgan, Freelance Writer,  6/30/2020
White Papers
DevOps for the Database
Wired vs. Wireless LAN Solution
2020 State of Malware Report
How to Architect and Build Highly Observable Systems
Special Report: The Changing Face of Threat Intelligence