Enterprise Social Networks: A Guided Tour
(click image for larger view and for slideshow)
Jive Software is launching the next generation of its enterprise social networking platform to cloud customers first, and for the first time offering a 30-day free trial for customers who sign up online.

The new Jive for Teams cloud service will be the first to get features for embedding Jive functionality in other cloud applications and embedding other applications in the Jive comment stream. Those updates will be coming to a Jive 6 release of the software for on-premises deployment later this year.

This delivers on the number of promises from the "Project Thunder" initiative CEO Tony Zingale mentioned in a Jive earnings call in February, such as the ability for Jive to support the self-provisioning of accounts needed for true software-as-a-service application delivery. Previously, what Jive called its public cloud service was closer to traditional application hosting, requiring more manual setup of new instances of the software. Zingale said then that Jive needed to be able to support quicker provisioning of free-trial instances, since most customers want to try the software before they buy it, regardless of whether they deploy it on premises or in the cloud.

Jive is not going as far as to match the freemium model of Yammer, where a basic version of the service can be used for free, indefinitely. On the other hand, the version of the software you get access to during the free trial period is not a subset of the platform lacking administrative controls, as is the case with Yammer.

[ Is your company taking the best that people have to give? See Collaborative Innovation Not Optional In Today's Economy. ]

"It is the full platform, not a light version or a watered down version," said Nathan Rawlins, VP of product marketing at Jive.

Jive is promoting the cloud service as one enterprises might consider for a specific team or department, if not necessarily as a social collaboration platform for the entire company. Although enterprise social networking is most effective on a company-wide basis, "we've found the most important thing is that it start with a specific business purpose," Rawlins said.

As a marketing tactic, this strategy mirrors Yammer Premium Groups, an option the cloud-centric enterprise social networking company introduced as an option for companies that might want to buy upgraded services for some, but not all, of their employees. Yammer charges for premium groups on the basis of $79 per group, per month, rather than its subscription charge, which starts at $5 per user, per month.

The cloud release is also significant as a preview of Jive 6. Next-generation features added to the platform include:

-- Jive Anywhere, which makes Jive social collaboration available as a sidebar widget that can be displayed alongside any cloud or Web application. For example, a user looking up a customer record in Salesforce.com or Microsoft Dynamics could consult Jive conversations about that customer in context. Based on a plug-in available for the leading browsers, Jive Anywhere determines the correct context from Web page metadata, at a minimum, or through application programming interfaces, where available.

-- Jive !App Experiences, which delivers the ability to embed specific functionality from an external application within a comment stream. For example, a conversation could include a link to a specific folder from the Box cloud storage service. The "!" in the name refers to the exclamation point you would type in your message to start a reference to the application you want to embed. Mimicking the "@" reference feature pioneered by Twitter and Facebook, the exclamation point is linked to an auto-complete function that lets you pick from the available applications that support this protocol as you start typing the first few letters. This feature is based on features of the OpenSocial 2.0 specification for application embedding. Jive !App Experiences build on the Jive App Marketplace for third-party applications Jive introduced last year, which allowed third-party applications to be displayed as embedded screens within Jive.

-- Jive Edge, an improved search function that uses "social intelligence" to filter and personalize search results. One reason enterprise search tends not to be as good as search on the Web is that the Internet provides more context in the form of links between documents and other signals of relevance, Rawlins said. Jive Edge uses social signals, such as comments, to determine which content is most interesting and relevant. Jive Edge uses technology Jive obtained with the acquisition of Proximal Labs last year.

Jive said it has also delivered major improvements to the What Matters activity stream it introduced last year, with Jive 5. According to Jive, the new version "combines the simplicity and familiarity of Facebook-style activity streams with smart filtering that removes irrelevant noise and delivers just the information essential to people's jobs." With a new capability called Attention Streams, users will also be able to create personalized, curated streams focusing on specific areas of interest, such as people, departments, projects, and activities. 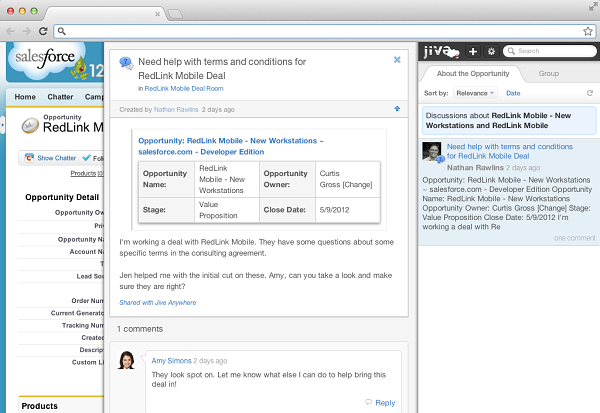