For IT professionals, as well as the CIOs who sign off on expensive Oracle technology, the company's new cloud strategy is a sea change worth watching.

Oracle is best known to the general public for co-founder Larry Ellison's flamboyant passion for America's Cup racing yachts, but the aircraft carrier of a company that he controls is in the middle of a course change in choppy water or, in this case, choppy clouds.

In the past, Oracle has sold database software to major businesses using licensing agreements. It grew in its time much as IBM did, by providing its enterprise-class software for corporate internal use in a local data center.

But unlike IBM -- or perhaps because of IBM's experiences -- Oracle has seen where it must go to continue to be a viable company.

It's going to the cloud.

Spurred by competitors like Salesforce.com and Workday, in the last part of 2014 Oracle acquired major players in the cloud, like Datalogix, a data analytics firm that counts major corporate players among its clients. Oracle can both store information and analyze it with these new acquisitions, in that way providing a solution rather than just a technology. 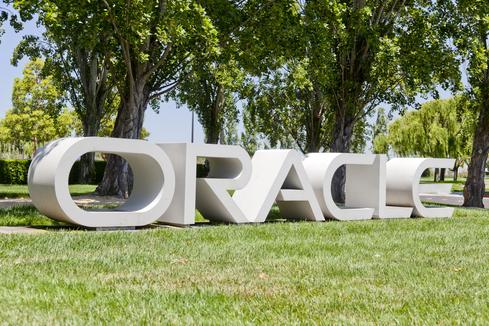 The Oracle cloud engine has four distinct parts: Software-as-a-Service, Platform-as-a-Service, Infrastructure-as-a-Service and, most recently, Data-as-a-Service. It is hoped that whatever level of solution that a company needs (such as those solutions needed by mid-level companies) Oracle will be able to provide it.

For IT professionals, as well as the CIOs who sign-off on expensive Oracle technology, this is a sea change worth watching. For years, Oracle made its money by locking in customers with contracts. The cloud and non-traditional players, such as Amazon, have broken that cycle, meaning Oracle has to offer more services with extra flexibility to keep its customer base secure.

However, many companies -- think Microsoft, for example -- talk about how they are now cloud computing firms first and foremost. It's nice to say but hard to accomplish. That's why Oracle's latest financial report, released just this week, shows how the software giant is performing in the cloud market.

On June 17, Oracle announced its earnings for its 2015 financial fourth quarter. This provides an opportunity to evaluate how things are going with its cloud computing plan.

While Wall Street was looking for earnings of 87 cents per share with $10.95 billion in revenue, Oracle reported non-GAAP revenue of 78 cents per share on revenue of $10.7 billion. Things were disappointing for investors on that news.

But Oracle fluffed it all over by invoking currency fluctuation as the root cause, not any problem with the overall vision.

Still, the 17% year-over-year decline in new software licenses -- the company's original core business -- cannot be ignored. It shows that customers are indeed turning from Oracle's original business model and using more of recent technology beyond the corporate data center.

Oracle emphasized this in a statement released Wednesday.

"We sold an astonishing $426 million of new SaaS and PaaS annually recurring cloud subscription revenue in Q4," CEO Safra Catz wrote. "We expect our rapidly increasing cloud sales to quickly translate into significantly more revenue and profits for Oracle Corporation. For example, SaaS and PaaS revenues grew at a 34% constant currency rate in our just completed Q4, but we expect that revenue growth rate to jump to around 60% in constant currency this new fiscal year."

Note the heavy use of "constant currency" comparisons.

[Read more about online classes to help you master the cloud.]

Oracle is global in scope, and thus always subject to currency fluctuations in a major way. But that does not obscure the point that they expect cloud to grow for them. And it is true that software licenses and IaaS or PaaS show up differently on an earnings report.

While software revenue can show up immediately, service revenue shows up over a longer time period; even when it provides a better revenue stream over time.

Oracle thinks that cloud revenue will last for a longer time, even though it may not show up on its balance sheet as fast. It may be right in this judgment, but it is a definite change from what it has been doing in the past.

Larry Loeb has written for many of the last century's major "dead tree" computer magazines, having been, among other things, a consulting editor for BYTE magazine and senior editor for the launch of WebWeek. He has written a book on the Secure Electronic Transaction Internet ... View Full Bio
We welcome your comments on this topic on our social media channels, or [contact us directly] with questions about the site.
Comment  |
Email This  |
Print  |
RSS
More Insights
Webcasts
Unifying Your Endpoint Security Strategy
Monitoring the Invisible - Digital Experiences in a Zero Trust World
More Webcasts
White Papers
Today's Hybrid Work Model Requires a Hybrid Approach to Security
Preparing an Endpoint Security Strategy to Address Ransomware
More White Papers
Reports
The 2021 Security Outcomes Study
SANS 2021 Cloud Security Survey
More Reports

Oracle just bought companies that live in the cloud, like Datalogix.  That companies spin is to meaure cross-channel consumer behavior, not matter on what media channel they do it. By integrating all the channels, they give a more comprehensive picture to the major corporate players they sell the data to.

Oracle want to deliver solutions, not just tools. Solutions will require differing tools depending on wha the solution needs, hence the Data-as-a-Solution leg of their cloud vision.

Most current solutions need clouds to do their background number crunching, as well as acess data. Oracle has seen this in time to get there just as their customers are realizing the need for it.
Reply  |  Post Message  |  Messages List  |  Start a Board

Yes, migrating to the cloud for a lot of products makes a lot of sense.

But Oracle is trying to do more than just migrate to another delivery platform.

Anyone who needs to go from A to B can drive their car down a publicly funded road.

Oracle wants to be your limosine service; picking you up, opening the door for you to get in, driving you over those same roads, and then letting you off. They are trying to sell their services as a total solution.
Reply  |  Post Message  |  Messages List  |  Start a Board
InformationWeek Is Getting an Upgrade!