The US Navy is moving ahead with its efforts to deploy an advanced at-sea network aboard its warships and coastal facilities. A key goal of the Consolidated Afloat Networks (CANES) is to replace multiple existing networks and hardware aboard Navy vessels with a standardized, virtualized, cloud-based system that is highly resistant to cyberattack.

Besides replacing older command-and-control systems and integrating new ones, CANES represents a different approach to how the Navy looks at its networks, explained Rear Admiral Christian Becker, Navy program executive officer for Command, Control, Communications, Computers and Intelligence. Traditionally, sensor, weapon, and communications systems operated as their own independent silos with separate hardware and software managed by a command and control system, which had its own hardware and software. The new approach represented by CANES, Becker said, is to view all of these systems as part of a single integrated, predominantly software-based platform. 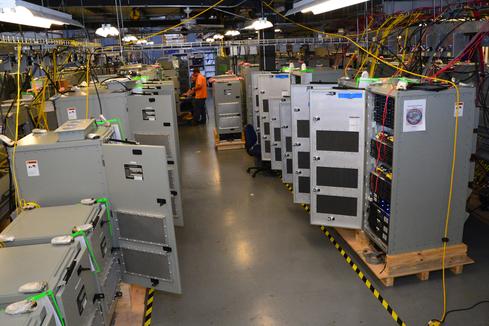 CANES equipment being prepped for for installation aboard the aircraft carrier USS Ronald Reagan. (Source: US Navy)

Access to the at-sea cloud and the larger Navy networks will be scaled to the type of vessel using it, said Becker. The Office of Naval Research is currently assessing the best ways to use cloud-based networking at sea, but the ability to fully access the Navy cloud will first appear on larger vessels capable of carrying larger, higher bandwidth satellite antennas before being installed on smaller ships.

One of the biggest advantages of moving to a virtualized, cloud-based system is that it allows the Navy to greatly improve its cyber defense capabilities, McNeal said. CANES provides warships with improved, consolidated information assurance, firewall and intrusion detection systems for a defense-in-depth approach against cyberattacks. Additionally, he noted that the system architecture includes a core enterprise services domain running core operating systems and applications, a communications domain for routing and gateway management, and a computing domain for end-user services and voice communications.

Initial test and evaluation for CANES began on August 11 aboard the destroyer USS Higgins, the first ship fitted with the system. The ship is expected to be ready for full operational deployment sometime in the third quarter of 2015, according to Navy officials. They added that when the decision for full deployment is made, CANES will be authorized to move into its full operational capability.

Nine other Navy destroyers have been fitted with CANES and will follow the Higgins into limited deployment, officials said. Installation is also ongoing on three aircraft carriers, one amphibious assault ship, eight additional destroyers, one landing dock ship and one cruiser. According to the Navy, an additional 28 CANES installations are planned throughout the 2015 and 2016 fiscal years. CANES will also be installed on all new Navy ships and those currently under construction.

When complete in 2022, CANES will be deployed on 180 Navy ships, submarines, and maritime operations centers.