The Computer Of The Near Future

The incompatibility of the hardware and software of the present (PCs) and the future (tablets) is stark. Nobody has really solved the problem, but there is a reasonable interim approach.
Larry Seltzer
Contributor
April 12, 2012

At a press event recently, I was looking at Windows 8 and something clicked: There's really no good way to merge the user interfaces of the past--keyboard and mouse--with what seems to be the UI paradigm of the future, which is touch. This could be ugly.

I feel a little thick at taking so long to realize this. It's not like there haven't been hints. BYTE's Chris Spera makes many of these points in his unhappy writings (part 1 and part 2) on the Windows 8 Consumer Preview, and Serdar Yegulalp has voiced similar concerns.

What I heard them saying sounded parochial and particular to Windows and Microsoft, but the problem is really more general. Even Apple is far from solving it. With Windows 8, Microsoft is just making it more obvious.

On one hand, you have the classic PC/Mac approach with keyboard and mouse or some similar pointing device. This approach excels at certain important tasks, the most obvious of which is typing. Touch-based devices--let's face it--suck at typing. You can do a little bit of it, but mostly it just makes you wish voice recognition was better. There are other tasks for which touch is inadequate, but let's focus on typing because it's the most important. 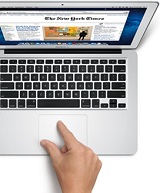 Apple and some others attempt to implement multi-touch on their touchpads.
Then you have the touch interface on phones and tablets where all the excitement is these days. When developers write one of these apps, they use touch and, more to the point, multi-touch, because it's maybe useful and definitely cool. An app that uses plain touch can be handled reasonably, if not optimally, by a keyboard and mouse. But multi-touch, such as pinch and zoom or two-person operation, just can't be done well.

The image at left of a MacBook shows one approach. Apple supports multi-touch gestures on its trackpad. Synaptics supports the same sort of thing on its touchpad. This is probably as good as it's going to get on a conventional computer and it's clearly a major step down from actually touching the screen.

There's another approach and you might have seen it: products like the the ZAGGmate iPad case, below. 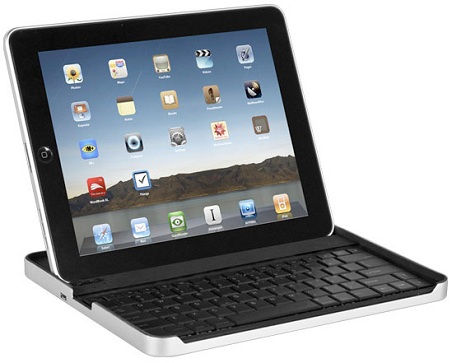 There are lots of iPad cases with integrated Bluetooth keyboards. I picked the ZAGG basically at random. There are non-iPad solutions, too, such as Lenovo's ThinkPad Tablet Keyboard Folio Case for the ThinkPad Tablet running Android, shown below. 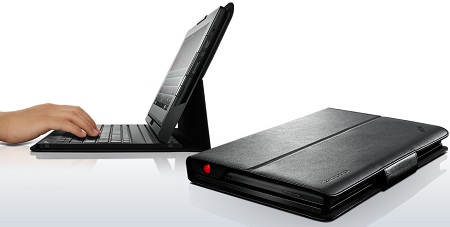 Another approach that goes one better is the Lenovo Yoga, a notebook that folds 360 degrees around to become a tablet.

Even with these approaches the differences between the two types of programs will make the experience unnatural. But it might be the best you can hope for--unless you don't need to type.

This is a problem for which there is not a clear solution. The vibe you'd get from industry marketing is that the desktop is dying off, but in fact tablets are generally supplementing PCs, not replacing them. This gap in the apps is the reason why.