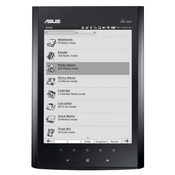 Asus has released a digital notepad and e-book reader that the company says is capable of capturing handwritten notes and detailed sketches.

The notepad functionality of the Eee Note EA800 adds a twist to the e-reader market, which is more focused on providing devices for reading books, magazines and newspapers. Asus launched the device Tuesday on its product page.

The Eee Note has an 8-inch glass screen with a matte finish for smooth writing with the supplied stylus. The device displays text and sketches only in black and white and does not use a backlight, which means images remain clear even in sunlight.

The Eee Note's 4 GB of internal memory is enough to store 10,000 e-books or 20,000 handwritten notes, according to Asus. The device also supports an external Micro SD Card for additional storage.

Other features include an integrated 2-megpixel digital camera and a voice recorder. The device weighs just over a pound, gets 13.5 hours of battery life and has built-in Wi-Fi for accessing a limited number of online resources, such as Wikipedia and e-book retailers.

Asus did not release a suggested retail price.

Asus' new product indicates the computer maker is looking to capture a share of the e-reader market during the holiday season with a more versatile device than Amazon.com's Kindle and Barnes & Noble's Nook. With the latter two devices tied to booksellers, both products are more focused on providing strong capabilities for buying and reading books and periodicals.

However, B&N last month tried to one-up Amazon.com by introducing a Nook with a color touch screen. In releasing the Nookcolor, B&N launched a section on its bookstore dedicated to children's books.