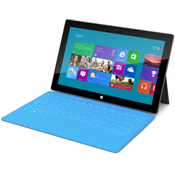 After days of speculation about a Microsoft-crafted Windows 8 tablet, the software giant delivered the goods Monday night in Los Angeles, in the form of Surface--one tablet for Windows 8 RT running on NVidia's ARM processor, and one for Windows 8 Pro, running on Intel's Ivy Bridge (using the i5 core). Despite rampant speculation, the announcement still felt a little like a surprise.

The Surface for Windows 8 RT weighs 676 grams and is 9.3 mm thick. By way of comparison, the iPad weighs 652 grams and measures 9.4 mm thick. Using a 10.6-inch ClearType HD display, this Microsoft tablet includes USB 2.0, Micro HD, and microSD options for connectivity. The 2x2 MIMO antennas give it the strongest WiFi capability of any tablet, according to Microsoft's Windows chief Steve Sinofsky.

The Surface for Windows 8 Pro is heavier, at 903 grams, and thicker at 13.5 mm. It also includes the 10.6-inch ClearType display, but Microsoft's spec sheets say it is "Full HD." It includes USB 3.0 along with microSD, and a Mini DisplayPort Video--so users can send video to a full screen or other compatible display.

Microsoft spent a great deal of time talking about the design of Surface, with its VaporMG case. Microsoft claims the tablet is scratch and wear resistant, and designed to be both sturdy and light. The display uses Corning's Gorilla Glass. The device also includes a built-in kickstand, made with the same material and integrated so that it doesn't stick out or add very much to the Surface's weight (it is .7 mm thick and fits into the device). Microsoft is also including a magnetic cover. But this cover doesn't just snap on and sit there--its underside is actually a touch keyboard, with a track pad and Metro user interface keys. The cover is 3 mm thick.

Microsoft provided a few other details: The camera is angled at 22 degrees, which Sinofsky said lets everyone at a table (presumably gathered around the tablet) be in the frame. And of course, the Surface serves as a good Skype device, Sinofsky pointed out. The Surface includes dual array microphones and speakers.

The Windows 8 Pro version includes pen input. Because the screen is optically bonded, it feels as if you're actually writing on it, said Microsoft VP Michael Angiulo. The Surface includes what Angiulo called Palm Lock, so that the image doesn't move while you're writing on it. The writing input is sampled at 600 dpi, for sub pixel accuracy and smoothness, Angiulo said.

Microsoft didn't give shipment dates or pricing, but said the Windows RT version would ship around the time when Windows 8 is made available, and the Pro model will come three months later.

The RT version comes in 32 GB and 64 GB models, and will be priced comparably to other consumer tablets. The Windows Pro version will come in 64 GB and 128 GB versions and will be priced like ultrabooks. Both will be available via the Microsoft physical stores, and online.