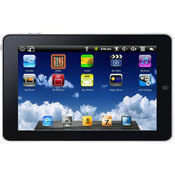 Maylong M-150 Universe Tablet PC
Proving that you don't have to break the bank to own an Android-powered tablet, GPS maker Maylong is offering a 7-inch device for $100, available online only at Walgreens.com. The device regularly retails for $129.99.

The M-150 Universe tablet has an LCD resistive touchscreen that bears a striking resemblance to a slightly stretched version of the Apple iPad. It comes with an ARM9 (VM8505+) 400Mhz processor, 256MB of RAM, and runs on the older Android 1.6 operating system, so it does not support 3G. It is not known whether the device can be upgraded.

It also comes with built-in flash memory and an 800 x 480 pixel resolution. Other features include 802.11 b/g Wi-Fi connectivity, built-in speakers, a T-Flash card slot, a built-in Li-Polymer battery, stylus, and dongle for RJ-45 network, and USB connection. The device weighs 12 ounces and its dimensions are 7.5 x 4.6 x 0.03. A camera is not included.

The M-150 Universe tablet provides full Internet browsing, access to emails, and the ability to download and play games and install Google Android apps, according to Maylong. Users can also listen to music, watch videos, view photos, and read e-books, the company said.

Early reviews on Walgreens' website have been very favorable with several customers giving the M-150 a five-star rating. User comments on the Universe tablet include that it is "not super fast, but for the money it is well worth it," that it "works right out of the box" and is "very easy to use."

The $100 price tag beats that of the 7-inch Augen Gentouch78 tablet PC that Kmart offered over the summer. That Android 2.1-powered device comes with an 800MHz CPU, 256MB of RAM, 2GB of storage, an SD card slot, and Wi-Fi, for $149. However, orders for the device were cancelled after reported problems with an unlicensed version of Android.