Larry Page will become the CEO of a company called Alphabet, an umbrella operation. Google will operate under it, with Sundar Pichai as its CEO.

Google has given birth to its future parent company, Alphabet, a freshly formed umbrella organization under which Google and the company's current subsidiaries will be reorganized and realigned.

Larry Page said he will serve as the CEO of Alphabet, assisted by Sergey Brin as president. Google, in somewhat diminished form, will be led by Sundar Pichai, who is presently SVP of products at the company.

"Alphabet is about businesses prospering through strong leaders and independence," said Page in a note posted to the Alphabet website. "In general, our model is to have a strong CEO who runs each business, with Sergey and me in service to them as needed. We will rigorously handle capital allocation and work to make sure each business is executing well."

Page and Brin intend to focus on Google X, which has been working on "moonshot" research projects such as self-driving cars, smart contact lenses, and drone-based deliveries (and on growing Google Ventures and Google Capital), all of which will be presumably rebranded without the Google name. Google's cofounders will also oversee other Google businesses, such as Calico, Nest, and Google Fiber as Alphabet companies. 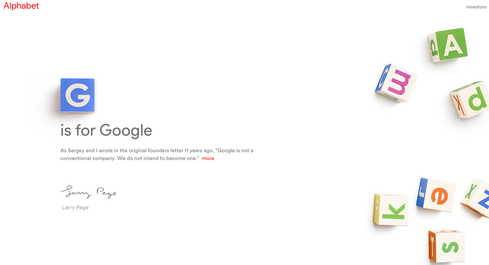 Google will be left with "search, ads, maps, apps, YouTube and Android and the related technical infrastructure," according to the company's Form 8-K filing. This new structure may help Google with regard to its troubles in Europe, where authorities have challenged its search and mobile business practices.

According to Brin, Alphabet will replace Google as the publicly traded entity. At the conclusion of the process, Google shareholders will become Alphabet shareholders, though Alphabet shares will continue to trade under GOOGL and GOOG. Alphabet expects to report its financial results under the new structure in Q4 2015.

Google's last reboot occurred in 2011, when Page took over for Eric Schmidt, who had been appointed in 2001 to provide "adult supervision" when the company's founders were still youthful enough to make investors worry that their funds would not be applied responsibly.

In a nod to HBO's satirical gem Silicon Valley, which pokes fun at Google, Facebook, and their ilk through a fictional company called Hooli, Alphabet's website includes a hidden link that points to http://www.hooli.xyz/.

The Hooli website explains, "HooliXYZ is Hooli's experimental division. The dream kitchen. The moonshot factory. The laboratory of possibility. The midwife of magic. The womb of wonders."