Beyond The iPhone, Why Apple Sues Samsung - InformationWeek

50%
Tweet
Apple wants more than to stop Samsung's smart phones from launching. Mindful that Android already controls half the market, it is setting its sights on making a royalty on every Android phone sold.

Experts predict that Apple's iPhone 5 will be the best selling smart phone of all time, and could even boost our GDP by 0.5 percent. But Apple might be intending to take an even bigger bite out of the market, by going after every device maker in the smart phone market.

At the end of the day, not everyone will buy an iPhone, but most people are expected to buy a smart phone. Although the Samsung and Apple trial dominated the news as of late, the real reason why Apple might be going after Samsung is to indirectly cash in on the success of Android and its open ecosystem. 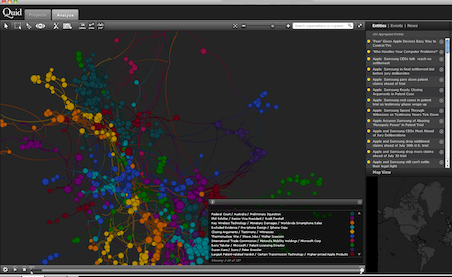 At first glance, it might appear that Apple won against Samsung in court, but with more than 14,000 press articles covering all angles of the case it's hard to make sense of the outcome based on casual analysis.

A more complex Apple battle plan than meets the eye is unfolding, Sumon Sadhu, the director of intelligence at text analytics startup Quid, told BYTE. "Apple's battle against Samsung was intended to be the spark to set a precedent of obtaining royalties from every Android device maker," said Sadhu, who used Quid software to break down all of the lawsuit-related articles into consumable categories and generate insight.

"If [Apple] was able to obtain this judgment as opposed to a settlement, we could anticipate a situation where every mobile device on iOS, Android, and Windows Phone would directly contribute to Apple's profit streams," said Sadhu. "That has bigger implications than launching a new iPhone."

Apple might be a dominant company in Cupertino with plans for a spaceship-like campus, but Samsung headquarters in South Korea is practically its own village, and its dominance in its local economy is massive. Apple might appear to be the winner in the patent case, but it didn't exactly get what it wanted. First, Apple didn't get the $2.5 billion it sought.

Beyond all the glitz and glamor of new products, licensing deals emerge as Apple's other market share. By nature, Apple's OS is a closed system for innovation. Android is an open system. Instead of ignoring it, Apple wants to capitalize on it. However, because Google is not a hardware company, Apple can't directly sue Google.

Thus Apple's decision to go after Samsung. The South Korean electronics company is, after all, the world's largest marker of phones, who also happens to be the largest distributor of the Android operating system.

The U.S. case of Apple versus Samsung began in April 2011 after Apple claimed that Samsung was copying the iPad and iPhone look and feel with its Nexus Z, Epic 4G, Galaxy S 4G, and Samsung Galaxy Tab. The judge ordered that Samsung pay $1 billion to Apple.

The result of that trial won't influence the sales of Galaxy S III and Galaxy Note smartphones--Samsung's latest devices--or devices sold outside the US.

A Sept. 20 injunction hearing has been scheduled, and depending on the outcome, it would affect a number of Samsung devices, according to The Verge. A possible outcome could be for Samsung to pay Apple royalties on each phone that is sold.

Comment  |
Email This  |
Print  |
RSS
More Insights
Webcasts
5 Steps to Integrate SAST into the DevSecOps Pipeline
Are You Ready for When Cyber Attackers Get In?
More Webcasts
White Papers
Using AI to Power AppSec
NetFlow vs Packet Data
More White Papers
Reports
Can You Spare 10-12 Mins to Help Us Out with a Survey on Tech Trends?
Got 7 Minutes? Dark Reading Needs Your Help With Our Survey on Incident Response
More Reports