Intel has announced the new Arduino 101, an Arduino platform based on the Intel Curie module. While it's aimed primarily at the education and maker communities, there are plenty of commercial applications, including the opportunity to experiment with Internet of Things (IoT) projects, including wearables, diminutive gadgets, and sensors 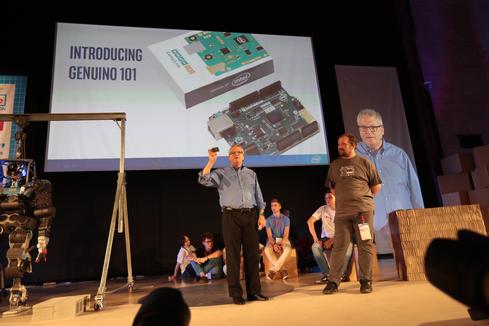 In recent years Intel has chosen the Rome Maker Faire as the place to introduce new products for the education, prototyping, and maker markets. This year marks the third in a row with a new product: The Genuino 101 (Arduino 101 in the US), an Arduino board built around a relatively new Intel processor.

While it's aimed primarily at the education and maker communities, there are plenty of commercial applications, such as experimenting with Internet of Things (IoT) projects, including wearables, diminutive gadgets, and sensors

At CES 2015, Intel introduced the Curie module, a low-power processor based on the Intel Quark SE system-on-a-chip that includes motion sensor, Bluetooth, and battery-charging features. Intel has now placed the Curie module on an Arduino, so providing a low-cost, simple-programming platform with genuine "Intel Inside" hardware.

This new board rounds out a collection of development, education, and experimentation platforms that bring Intel into the Arduino universe. Arduino 101 will be on sale in the US in first quarter 2016 with a suggested retail price of $30.

Let's take a look at the new Arduino 101, its Intel siblings, and the way the three fit into a unified picture.

Then, in the comments section below, let's talk about how you would use each of the three boards. I've got my ideas (and boards on the way) and I'd love to hear what you are planning to do -- or have done -- with the Edison, Galileo, and Arduino 101.