The Sharing Economy: Access Is The New Ownership - InformationWeek

A report from PricewaterhouseCoopers predicts that revenue in five key sectors of the sharing economy could reach $335 billion by 2025.

Communism may have failed to establish collective property ownership, but it has evolved to meet capitalism halfway in the sharing economy.

Thanks to the mobile revolution and a confluence of other factors -- 35 years of wage stagnation, entrepreneurs challenging ossified business models, the appeal of convenience, environmental concerns, and affinity for social interaction – access has become the new ownership, at least from a consumer perspective.

Companies in the tech industry are most engaged with the sharing economy, and view it as both a near-term threat and an opportunity, said Matt Hobbs, software and Internet industry partner at PwC, in a phone interview. Among companies where sharing has not yet had an impact, he said, many are looking for ways to get out in front of the trend rather than waiting to find their business model disrupted.

Simultaneously, companies must now figure out how to deal with a growing number of customers who would rather interact with one another than with a commercial vendor.

Airbnb booked lodging for 20 million travelers in 2014. Hilton in 2015 had 100 million reservations covering 140 million guests, according to a company spokesperson.

PricewaterhouseCoopers (PwC) has published a report that suggests the sharing economy will grow. According to the report, which is based on an online survey of 1,000 people, 19% of US adults have participated in a sharing economy transaction and 72% said they could see themselves being a consumer in the sharing economy in the next two years. 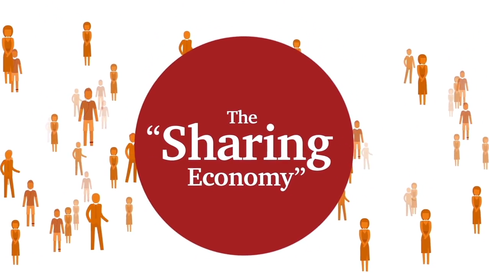 PwC identifies five main sectors affected by the sharing movement: Travel, car-sharing, finance, staffing, and audio/video streaming. Some of the companies participating in the movement include: RelayRides (rent your car), Poshmark (sell your clothing), CouchSurfing (rent a room), and Feastly (dine in someone else's home).

There are also many different variations on the sharing model that rely on traditional asset ownership. ZipCar, for example, could be described as a car-sharing service. But it's really more of an on-demand, short-term car rental firm that, thanks to the convenience afforded by mobile technology and the cloud, obviates the need to own a car or a second car.

Global revenues in these sectors, which amount to $15 billion today, could reach $335 billion by 2025, according to PwC.

It may be that companies themselves, by failing to increase wages sufficiently over the past few decades, have brought the situation on themselves. When cash is tight, sharing to earn extra income (by, say, renting out a room through Airbnb or preparing food for strangers through EatWith) makes a certain amount of sense.

According to the Economic Policy Institute, productivity grew 64.9% between 1979 and 2013, while hourly compensation of production and nonsupervisory workers -- the bulk of the workforce -- grew just 8.2%. Who benefited from this productivity increase if not those producing the goods? The top 1% of earners of the management class, who saw their annual wages rise 153.6% between 1979 and 2012. Meanwhile, more than 90% of American households saw their incomes grow more slowly than average income grew -- an average lifted by the explosive incomes of top earners.

Businesses, it seems, haven't rewarded their employees enough to be able to afford the products they're selling.

PwC's report doesn't address that possibility directly, though it does note that those most excited by the sharing economy are 18 to 24 year olds, households with income between $50,000 and $75,000, and those with kids under 18 -- people without a lot of disposable income. Add to that the fact that 86% of survey respondents cite affordability as a benefit of the sharing economy and it becomes clear that relative lack of wealth burnishes the appeal of sharing.

PwC's Hobbs said he couldn't be certain about how economic trends have influenced the appeal of the sharing economy. But, he said, "Cost is certainly one element that showed through in the survey."

PwC's report does, however, acknowledge that there are issues with the sharing economy, such as the impact it has on the labor force and the perception that it encourages freelancing and lack of regulation. "For some, this is regarded as a benefit, enabling workers to earn wages on their own time and their own terms," the report said. "For others, it heralds an era of depressed earnings and greater reliance on welfare and other government subsidies."

Hobbs noted that one of the interesting findings in the report was that 78% of respondents expect that, in 30 years, working multiple jobs will be "the new normal." That suggests a future of greater economic uncertainty, one that isn't likely to make ownership of major assets like cars more appealing.

Trust, said Hobbs, is a critical element for sharing. Yet home-sharing and ride-sharing, where participants face personal risk, have taken off. The report notes that Airbnb has thrived because consumers care more about affordability than the "people, places, love, and community" the company promotes.

Companies can't ignore the sharing economy, Hobbs said. They need to look at their business model and see whether they, or others, could use technology to deliver a better product or service. They need to consider customer expectations and assess whether they're providing the transactional ease people have come to expect. And they need to look at potential opportunities, to determine whether corporate assets could be enhanced through a digital platform, and whether office or manufacturing capacity could be utilized to address a market need.

"We look at this as an undeniable trend in technology industry," said Hobbs. "For many other industries, it's really in its infancy."

[Editor's note: This article has been updated to reflect changes PwC made to its report that more accurately represent the bookings of Airbnb and Hilton.]

Thomas Claburn has been writing about business and technology since 1996, for publications such as New Architect, PC Computing, InformationWeek, Salon, Wired, and Ziff Davis Smart Business. Before that, he worked in film and television, having earned a not particularly useful ... View Full Bio
We welcome your comments on this topic on our social media channels, or [contact us directly] with questions about the site.
Comment  |
Email This  |
Print  |
RSS
More Insights
Webcasts
How Elite Analyst Teams are Transforming Security with Cyber Reconnaissance
ROI and Beyond for the Cloud
More Webcasts
White Papers
Full Body Exposure: CybelAngel Analysis of Medical Data Leaks
The Insecure State of Microsoft Teams Security
More White Papers
Reports
The State of Cloud Computing - Fall 2020
Special Report: Edge Computing: An IT Platform for the New Enterprise
More Reports

It's an interesting concept to think that companies would be more open to sharing ideas for the good of the economy, but it really is too far fetched. We wouldn't do the same with the money we had in our pocket, why would we do it with the ideas that generate us an income? Sure some things are common knowledge like what a novated lease is or recipes and that sort of thing, but real business making technology and ideas? Those are a rare commodity.
Reply  |  Post Message  |  Messages List  |  Start a Board

Li Tan, the sharing economy does really benefit both providers and the consumers. Consumers get two things primarily: more choice and convenience. Providers get access to disruptive technology, allowing them to enter markets that were previously protected by big companies or constituencies. But ultimately, the trendiness of it will die down and it will just be another service provided by another service provider.
Reply  |  Post Message  |  Messages List  |  Start a Board

One sharing economy provider's idea of quality may not match anothers. If you pay $25 for a ride to SFO through a car sharing service and the car stinks, is it a better deal than a $50 ride in a well-maintained cab or a pristine $70 hired car? If someone fetches your groceries but the banana end up bruised, is that worth it? The answer depends on the person.
Reply  |  Post Message  |  Messages List  |  Start a Board

In my opinion the core of shared economy is that, it creates a kind of win-win situation for all the people involved in it - everybody can get the benefit via lower cost but higher quality.
Reply  |  Post Message  |  Messages List  |  Start a Board
Editors' Choice
Hot Topics