You might know him from his science fiction novels or from his "Computing at Chaos Manor" columns in BYTE. What you probably don't know is that Jerry Pournelle is a polymath with degrees in statistics, systems engineering, psychology, and political science, and a working knowledge of just about anything else you can think of.
Daniel Dern
Contributor
April 09, 2012
In the computer industry, Jerry Pournelle is best known for "Computing At Chaos Manor," the industry's first and longest-running monthly column, now over 20 years old. The column first appeared in BYTE Magazine in 1979 and ran for several years in one or two overseas publications through mid-2001. Most recently it was reincarnated as Chaos Manor Reviews, a dedicated site.

Jerry Eugene Pournelle was born in 1933 in Shreveport, La. He served in the U.S. Army during the Korean War. He holds masters' degrees in experimental statistics and systems engineering, and Ph.D.s in psychology and political science, all from the University of Washington. He worked in the aerospace industry at Boeing on Project Thor to study kinetic projectile space bombardment and on Project 75, "a 1964 study of 1975 defense requirements."

Jerry is a science writer and journalist but considers fiction his primary profession. He's best known for the sci-fi books he co-wrote with Larry Niven, including Oath of Fealty; The Mote in God's Eye, and the sequel to Mote, The Gripping Hand. He is also known for several books based on Falkenberg's Legion, a fictional mercenary infantry force.

Listen to BYTE's series of podcast interviews with Jerry Pournelle, with topics ranging from how sci-fi writers predict the future to why the Internet will never die. 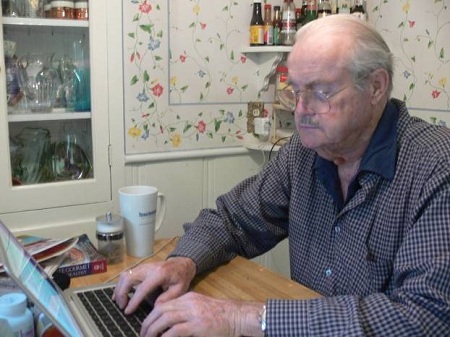