50%
Tweet
Give the Microsoft CEO credit for his articulate vision. Now comes the hard part: execution.

No one can accuse Satya Nadella of keeping quiet during his first five-and-half months as Microsoft CEO.

Nor should anyone claim he's merely a caretaker, a company yes man who's just carrying out the bidding of a not-so-mysterious wizard behind the scenes. Last week kinda-sorta eviscerated that notion, from his 3,000-plus-word, company-wide missive to his keynote address at Microsoft's Worldwide Partner Conference (WPC) to, most recently, telling his employees that 18,000 of them would soon be out of a job.

Microsoft is Nadella's show now, and the CEO deserves high marks for communication in his early days at the helm. He's proving adept at telling a lucid story, whether sharing his vision of the future or delivering bad news to a whole lot of people. Even the keywords that anchor the new corporate vocabulary -- "productivity" has become Nadella's go-to term -- better connect with real people than, say, "devices and services." (When's the last time you said "Let me check my device" when looking for a restaurant or directions? For that matter, when's the last time you thought of Skype as a "service" instead of just, you know, "Skype?" Never, maybe?)

"To my mind, Satya Nadella's [WPC] keynote was the most definitive and clear vision and gameplan commitment coming out of any top IT company CEO in a long time," Techaisle analyst Anurag Agrawal said in an email interview. "He has recognized that there is very little difference between a consumer and a professional, that today's consumer is living in a collaborative economy, that individual productivity impacts professional group productivity, and therefore he has laid down the gauntlet of re-designing productivity in a collaborative, multi-device, post-PC world."

Indeed, Nadella seems to be in touch with the real world -- something that wasn't a given at Microsoft of late. (Windows 8, anyone?) He's not a robot and he's not tone-deaf. His email to employees announcing the largest downsizing in company history -- around 14% when it's all said and done, probably the right long-term move but, in the short-term, a lousy day for a lot of people -- had a certain grace uncommon in such communications. It was honest, direct, and well-structured, without sounding inhuman or patronizing. In the wrong hands, this kind of bad-news memo from the C-suite becomes stilted and loses sight of its intended audience.

For comparison, read Stephen Elop's email to Microsoft Devices Group employees, who will bear the worst of the staff reduction. To borrow a journalism term, Elop buried the lead -- 12,500 of you are going to lose your job -- three-quarters of the way through his email. The message had a certain funereal feel at times, except it appeared to mourn the final passing of Nokia rather than the imminent end of thousands of jobs. And even as Elop acknowledged that the old Nokia is gone -- "It is particularly important to recognize that the role of phones within Microsoft is different than it was within Nokia," he wrote -- his use of the pronoun "our" did not seem to mean "Microsoft." 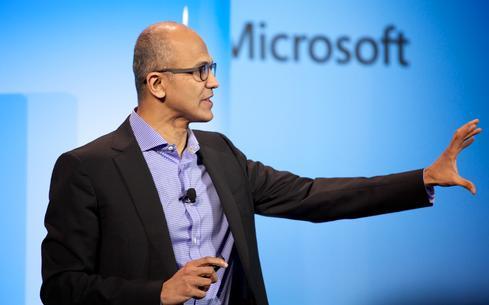 Layoffs are tough stuff, most of all, of course, for the people whose jobs are gone. There's not really a "good" way to handle them, but Nadella, publicly at least, did as a fine a job as one could expect, even if the cuts were inevitable.

"Layoffs are not good for the employees, but Nadella is on a mission for the greater good of the organization, creating a path for nimble movement rather the glacial pace it has been experiencing while others whiz by," Agrawal said.

Guessing who those "others" are does not require strenuous brain calisthenics. Apple and Google have thumped Microsoft in the mobility arena. It may be a mobile-first world, but for Microsoft it's been a mobile-distant-third world to date. Microsoft got its you-know-what kicked when smartphones and tablets exploded onto the scene. Now the new Apple-IBM partnership threatens Microsoft where it has been historically most dominant: enterprise IT. Meanwhile, Google's Android is a growing monster, especially in the lower-price phone segments that Microsoft hopes will be a boon for Windows Phone adoption.

So, yeah, Microsoft needs agility and speed in abundance. Its competition has never been more ferocious. Now is not the time for corporate bloat. Nadella gets that. Better still, he's doing a good job of showing that he gets it each time he takes a stage or sends a company-wide email.

There's a difference, though, between envisioning a good story and sitting down to write it. Los Angeles is full of people with "a great idea for a movie." It's home to far fewer people who actually write the script or get behind the camera.

We'll hear more from Satya Nadella when Microsoft reports earnings Tuesday. He's been saying the right things so far, even when they're unpleasant. Now, can he and Microsoft deliver?

It'll be interesting stuff, that's for sure. I do believe the focus should be on tablets and mobile ,as that is where most people are headed these days, considering the trends and growing market share.
Reply  |  Post Message  |  Messages List  |  Start a Board


Nadella has a lot of work to do based on his predecessors not assessing the marketplace evolution. Layoffs are never pleasant but it appears that he is trying to restructure for the growth of the organization. He is making some of the right moves but the devil is in the execution, moving such a big ship in enough time to save it will be no small feat. Especially in today's world where a CEO's shelf life is very limited. I wish him the best of luck.

"He's been saying the right things so far"

Really ?  Nadella won't even reply to an open letter asking for the Visual Basic 6 (VB6) programming language to be open sourced.

He must focus on tablets and azure. No way around it. I will be listening on both counts tomorrow as MS announces earnings.
Reply  |  Post Message  |  Messages List  |  Start a Board

Microsoft allowed itself to get to the point where it needs to lay off 18,000 people to function better. That's what I call bloated. Nadella has been about as visionary as he can be within the confines of the crowded house that Ballmer built. Nadella speaks well, and seems to have his own thoughts and ideas. But I'm still not sure what Microsoft's strategy is, other than to put cloud and mobile first (and I'm not really sure what that means either). I'm eager to see him make a Eureka move, where I can say, "Oh I see." I think these massive and unfortunate layoffs are a preamble to a Eureka moment. There needs to be shakedown in Xbox, Surface or Windows Phone OS. Something's got to give in one of those areas.
Reply  |  Post Message  |  Messages List  |  Start a Board

You are one of the few that think that what he's been saying is articulate. Most think it's garbled, and I agree. It's true that he's moving away somewhat from Ballmer's ideas, but is he really? If he was moving away from devices and services, he would just fold the entire Nokia thing up, and drop tablets altogether. Both are failures, with no good vision showing how they can be otherwise. As far as this cloud and multiple OS device support, well, Ballmer began that before he left. Nadella is just adding to it. Really, if he does come out with some articulate vision, he hasn't stated it clearly so far.
Reply  |  Post Message  |  Messages List  |  Start a Board

As far as I understoof it, Microsoft was gutting a lot of the old Nokia staff, which in all fairness isn't that surprising. There are always layoffs when big companies merge and really, Microsoft was neveer going to dedicate itself to phones in the way Nokia did back in the day.
Reply  |  Post Message  |  Messages List  |  Start a Board

I have never understood how getting rid of the people who have made a company successful, is good business. Yes, it humbles and instills fear among the survivors. It creates a short term windfall in profits, which goes to stockholders and bonuses for the execs. The stock value goes up, when I would expect it to fall as my confidence in the company disappears. The people that provided the success are kicked to the curb. What good is in that?
Reply  |  Post Message  |  Messages List  |  Start a Board
Editors' Choice
Hot Topics