Collaborative robotics means busting industrial robots out of their safety cages and teaching them to work with and learn from people.

Rethink Robotics's collaborative robots, already on the market, are definitely not your father's robots, and the new Robot Positioning System (RPS) software upgrade makes clear just how fundamentally different they are in concept.

Since its early 1970s beginnings, the central drive of the robotics revolution in industrial manufacturing has been the development of fast, powerful devices to do things that are too dangerous or fatiguing, or require too great speed, precision, or force, for a human being. That combination of speed, power, and danger meant that robots had to be caged, partly for worker safety, but mainly because robots needed input materials and output constructions always to be in exactly the same positions and orientations. Within that necessary cage, the frontiers of robotics were speed, force, durability, and precision.

[Software smarter than you? Read Geekend: Replacing the Turing Test.]

Rethink Robotics set out to open a new frontier in a completely different direction. In 2012, Rethink introduced Baxter, its "collaborative robot," the brainchild and vision of legendary roboticist Rodney Brooks. 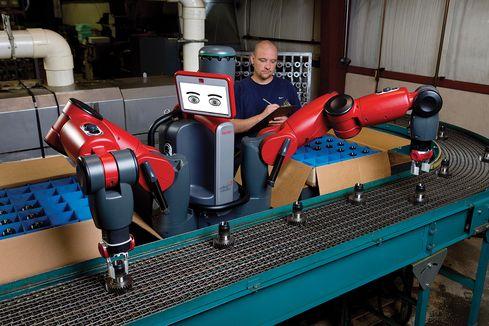 The fundamental idea of collaborative robotics is that a robot should work among -- not instead of -- human workers. Humans not only don't require a fixed environment, they lose much of their effectiveness when "everything gets bolted to the floor and changing a process is a big deal. At the end of the day, humans are good at responding to the market because they're flexible and you can just tell them, 'Here's what we're doing today,' and they do that," Jim Lawton, CMO at Rethink, says. "But with traditional robots, everything is fixed." An enclosed robot costs money, time, and effort to rebuild or move. On average, to change a traditional robot's task requires 200 hours of expensive coder time.

Lawton explains Rethink's insight: "We really need technology that allows rapid response to the market place, and that requires a different kind of robot."

A collaborative robot, as Rethink's engineers define it, is intended to work interactively in a people-compatible way. Baxter's two arms monitor force continuously at every joint -- the system always knows how much force it exerts in which directions. Constantly consulting its cameras and sensors, Baxter decides whether and when to execute each step of its programming (or to stop and ask for help) on every iteration of its work process. To tell Baxter what to do, a human worker manipulates Baxter's arms (which have embedded sensors and cameras) and Baxter records and plays back what it has been shown in constant comparison with real-time sensor/camera input.

In short, Baxter collaborates with human workers like another worker: It feels its way to a proper grip, looks where it is going, and learns by being shown how to do a thing.

Thus Baxter is not merely safe around people, but good with them. Instead of automating processes for which humans are too slow, weak, imprecise, or fragile, Baxter automates difficult-for-people tasks that workers need done well to be more productive.

Manufacturing and assembly tasks often are difficult for people because they require close attention to extremely dull and repetitive actions, a combination that all but guarantees carelessness and "spacing out" in humans. When Baxter packs shelving unit parts into a kit, puts an exact number of plastic cups in a neat stack into a plastic sleeve, or moves squeeze tube caps from a line to a filling machine, it doesn't get bored, careless, or sloppy. It counts, places, picks, and positions just as carefully at the end of three back-to-back shifts as it did in the first few minutes.

The human workers downstream from Baxter receive 100% correct work every time, and can concentrate on exercising their uniquely human judgment, perception, understanding, and foresight, without having to catch boredom-induced mistakes, report inattentive coworkers, or take turns at stupefying tasks.

Another advantage of the collaborative robotics approach is that because so much of the capability is in the software and "liveware," Baxter tends to increase in value after purchase. Where a traditional robot all too often ends up gathering dust in its cage when changing business needs eliminate its one job, workers familiar with Baxter and its capabilities find more uses for it, and as new software comes in from Rethink Robotics, Baxter becomes better and quicker at more complex tasks. For example, in just under a year, software upgrades tripled Baxter's speed and doubled its precision on a test task.

The most recent software improvement, the addition of RPS to the Intera-3.1 operating system, not only enhances Baxter's value, but also demonstrates what collaborative robotics means in practice. Baxter orients to its environment by camera-checking against "landmarks," which are small fixed plaques printed in high-contrast patterns. RPS allows Baxter to recalculate and reshape its internal model of the workspace and task. A misplaced box, a shifted table, or a slightly different placement of a materials pile doesn't stop the operation. Returning Baxter to a previously trained task requires only showing it the familiar landmarks before resuming work.

RPS, in other words, is a software update that not only makes Baxter more productive, but makes it more collaborative. That, more than anything else, may show the commitment of Rethink to the vision of collaborative robotics.