Meg Whitman's Clinton Endorsement: What It Says About IT Pros - InformationWeek 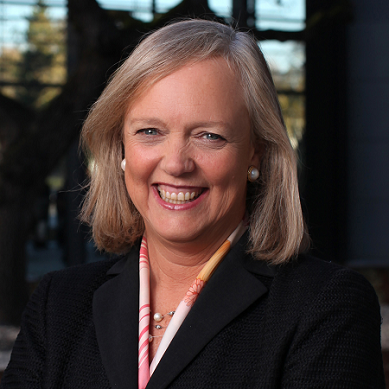 Politicians have to deal with the voters they have, not the ones they wish they had.  New York City is a huge part of New York, which Republican pols have to deal with.  They can wish it didn't exist, they can try to rally the rest of the state against it; or they can try to persuade NYC voters that their policies really are in everyone's interest, not just those of millionaires and upstaters.  It's really up to them.
Reply  |  Post Message  |  Messages List  |  Start a Board


We had to start somewhere.   And if she thinks the next time she runs for office in California, that democrats will follow suite, think again.  In the meantime, let the rest of your republican croonies know they should follow your lead.


But I am sure they already know that.

Completely agree. This is something that is playing out in the public right now. Nobody from the GOP establishment (Bush's, Romney for starters) looks good attacking Trump because they come across as party hacks interested in keeping power and interests to themselves and not the people. Trump seems to appeal to the people. He connects with them in a way Romney certainly could not. Sanders connected too on the other side only the establishment candidate won thanks to heavy handed DNC tactics that did not work on the GOP side.

Trump will always have his base, regardless of his gaffes (or media hype of anything he says). But Clinton's support is different and its unknown who the Sanders voters will support in the general election.
Reply  |  Post Message  |  Messages List  |  Start a Board

That's an interesting fact. In NY since the 19th century, the governors have been somewhat evenly split between the parties. However the Republicans that have been governors in my lifetime (Rockefeller and Pataki who were elected), tended to be pretty liberal. Rockefeller and the GOP establishment caused turmoil in the 64 election and Pataki to a certain extent did in this current one because the party nominees were outside the establishment. Malcolm Wilson was more conservative if i remember. Probably to balance out Rockefeller. But the state is dominated by NYC which is overwhelmingly Democrat. Republicans can win the state if they have a good message.
Reply  |  Post Message  |  Messages List  |  Start a Board

Christie and Trump know each other a long time. Both have similar types of shoot from the hip personalities so the endorsement did not suprise me. Plus i think Christie knows his time is up as governor in NJ and he wanted a job in the Administration should Trump win. While that obviously won't be the VP slot, he could be tapped for Attorney General. But Trump would have to win and i'm not so sure that will happen.

Much of Trumps' "policies" are sort of hybrid Democrat and Republican. He appeals to a wider range of Republicans not just the neo-cons or conservatives that infest the establishment of the GOP. I think it is good that he is shaking up the party because they keep trotting out the same old platform and many of the same candidates. Not that Clinton is a fresh face and she is really a rotten candidate. And not that Trump is a great candidate, he is too undisciplined. As nice as "plain talk" can be, there is a place in politics for discipline and using the right words because actions beyond ones control can take place. So we are in a bind.

But the establishment won't go down easy. I think they are still holding out for a palace coup before the election. I saw something last night about the GOP should kick Trump out and let "Pence and Cruz handle it." I think there might be a suprise on the Democrat side with some damning Wikileaks material coming out around October that might end Clinton's run.

So both parties will be dealing with frustrated members and possibly in uncharted waters. The Democrats have had more experience dealing with a divisive nominee and election, the Republicans have not. Should be interesting.
Reply  |  Post Message  |  Messages List  |  Start a Board

I find it saddening too. As you say party loyalty serves only those in the parties themselves. It speaks volumes for the cronyism in politics and shows that it's often more of a case of maintaining the status quo and keeping the old-boys club running than it is about actually introducing policy that can change the life of the average citizen.
Reply  |  Post Message  |  Messages List  |  Start a Board

I've always deemed party loyalty to be the least of all political virtues (if it's even a virtue at all).  In the end, elections and governing should be about the public interest, not factional interests; and political parties are nothing more than organized factions.  A citizen's civic loyalty should be to the country first, then to his local community (state, county, city, etc).; thus party loyalty should never rank higher than third.
Reply  |  Post Message  |  Messages List  |  Start a Board

Actually, while Democrats are currently dominant in California, there have only been four Democratic governors there since the 19th Century: Culbert Olson (1939-1943); Edmund G. Brown, Sr. (1959-1967); Edmund G. Brown, Jr. (1975-1983, 2011-), and Gray Davis (1999-2003).  Californians have traditionally been ticket splitters, so while the California Republican Party may currently be down and out, this is likely to be a temporary phenomenon (but its fortunes probably won't improve as long as orthodoxy remains more important than winning).
Reply  |  Post Message  |  Messages List  |  Start a Board

Actually, Mr. Christie's endorsement of Mr. Trump struck me as strange, though not nearly as strange as Sarah Palin's.  But Republicans are scrambling to figure out what to do with a presidential nominee who has publicly repudiated much of what the party has stood for most of the last century (though his stance on foreign trade would have been well within the 19th and early 20th century Republican mainstream, which was firmly protectionist).

Democrats had to deal with a highly divisive nominee in the form of George McGovern in 1972 (and more than a few politicians and activists publicly defected to Nixon), but Mr. McGovern was an experienced politician (Trump isn't even an experienced activist), most of his stances were within the Democratic mainstream of the time, and party discipline has never been as important to Democrats as to Republicans (this is largely due to the origins of the two parties).  Even when Barry Goldwater's presidential campaign crashed and burned in 1964, few if any prominent Republicans publicly supported Lyndon Johnson.  Indeed, I don't think there has been this much public dissatisfaction among Republicans with their presidential nominee since William Howard Taft got the nod in 1912 (he remains the last major party candidate and the only incumbent to ever finish below second place in a US Presidential election since the 12th Amendment established the current procedure, first used in 1804).
Reply  |  Post Message  |  Messages List  |  Start a Board

I do remember hearing about her campaign on the news and how bad it was run. She lost by over 10 points. While that is not really surprising in CA, Republicans do become governors every once in a while there. I live in NY and essentially there is no Republican party. There has to be an extraordinary candidate (like Guiliani or Bloomberg) to beat out the entrenched Democrats. So your point about electability is spot on.
Reply  |  Post Message  |  Messages List  |  Start a Board
Page 1 / 2   >   >>
Editors' Choice
Hot Topics