The Obamacare website faced heavy traffic on Monday, the deadline for open enrollment, and suffered problems.

On the final day of Obamacare open enrollment, the new, improved HealthCare.gov website was showing signs of its old dysfunctional habits.

The federal website for signing up for health insurance was offline for maintenance for six hours early Monday morning, coming back online at about 9:00 a.m. Eastern time. Later in the day, it was putting users in a holding queue because of heavy traffic, giving them a choice of either waiting or leaving an email address, so they could be invited back to finish their applications later. At about midday, users who had not previously started an application reported being unable to create accounts. 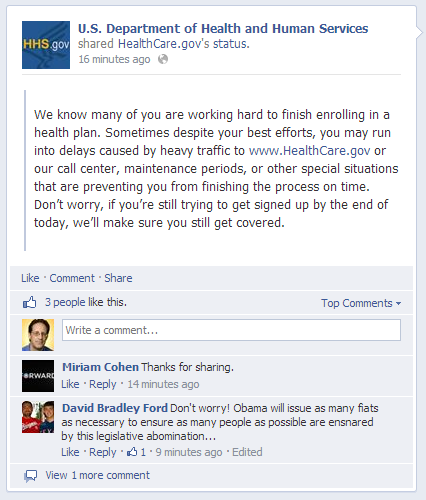 The problems were not on quite the same scale as HealthCare.gov experienced after its disastrous Oct. 1 rollout, but the tactic of queuing up users during periods when the website was overloaded with traffic is one that the website operators used last fall. Since early this year, HealthCare.gov has looked to be relatively fixed, thanks to an intensive turnaround effort. That has left some state-run health insurance exchanges that continue to struggle looking worse by comparison. Oregon is busy assessing blame for a health insurance exchange that still has not launched to consumers. Maryland is reportedly on the verge of contracting with the Connecticut health insurance exchange and Deloitte, the contractor that helped the state build it, to replace that state's online system, which never functioned properly.

HealthCare.gov provides the online health insurance marketplace for 36 states that chose not to implement their own exchange. Though March 31 was technically the deadline, the Obama administration has created some wiggle room to allow signups past that date for individuals who tried to sign up but experienced technical or logistical difficulties. Several state exchanges plan to grant similar extensions.

On Monday, federal officials couldn't seem to decide whether to boast or apologize. They cited 1.2 million visits through noon and more than 125,000 concurrent users at peak times.

At the same time, the Facebook page for the US Department of Health and Human Services acknowledged citizens could run into glitches or website maintenance issues but promised, "Don't worry, if you're still trying to get signed up by the end of today, we'll make sure you still get covered."

The next open enrollment period, for coverage to start in 2015, will start Nov. 15. In between, citizens who experience a major life event such as a job change or the birth of a child will be able to enroll.

Final count was 4.8+ million visits to the website and 1.8 million calls to the call center. How many people completed their applications remains to be revealed -- expect a trickle of applications to continue into April, people who say they tried but couldn't finish on "deadline" day.
Reply  |  Post Message  |  Messages List  |  Start a Board

A big part of the problem is that there are glitches in the process/execution of the ACA itself -- the Website aside.  There are still people who have been going through mounds of red tape as their hospital bills pile up while they get conflicting messages from the exchange and their new health insurance carrier as to who is going to foot them.
Reply  |  Post Message  |  Messages List  |  Start a Board

I confess to being amazed that HealthCare.gov and many state websites still haven't delivered a stable web experience 6 months after launch. That they would have some usability issues is not so surprising, since making a hard process simple is hard. But the scalability / reliability issues should have been addressed to a greater extent by now.

OK, so now the operators of these sites get a breather for a few months and a chance to retool. What's your bet on whether we'll have a smoothly functioning online healthcare enrollment system when the next open enrollment period begins Nov. 15.

Sadly for the Democrats, even if a turnaround is accomplished, we won't see the results until after Election Day. Besides, as the saying goes, you never get a second chance to make a first impression.
Reply  |  Post Message  |  Messages List  |  Start a Board
InformationWeek Is Getting an Upgrade!