Industry trends indicate most modern companies use cloud-based apps. Soon, more corporate data will be stored in the cloud rather than on-premises, explained Microsoft in a blog post on the release.

As businesses increase their cloud usage, so too do consumers. Even companies without official SaaS applications have significant shadow IT usage of cloud. Microsoft noted past consumer surveys have revealed over 80% of employees use unapproved SaaS for business -- and those are just the participants who admitted to it.

The enterprise security risk of Shadow IT is growing. An average employee uses 17 cloud apps, but their employers have no idea what they're using or whether anything they are using meets security and compliance requirements.

In 91% of businesses, workers give their personal accounts access to the corporate cloud storage, according to Microsoft.

Cloud App Security is a cloud-delivered service built for security, and IT teams, to gain more visibility into how cloud apps are used and control them via policy. Teams can design a process for securing cloud use -- a process that ranges from discovery and investigation capabilities to more detailed management control.

The service identifies all cloud apps across the network, and across all devices, through a feature called App Discovery. It also provides ongoing risk assessment, risk-scoring, and analytics.

Data Control is another capability that lets admins focus on sanctioned apps. This gives them the option to use API-based integration to set controls for data-sharing and loss prevention. Teams can opt to use out-of-the-box policies or to create their own.

The need for greater visibility and control with cloud apps is nothing new. However, most customers limit their tools to basic discovery capabilities and fail to maximize their use of cloud control, Microsoft explained. There is still a need for a solution that can address security issues across data, devices, apps, and identity. 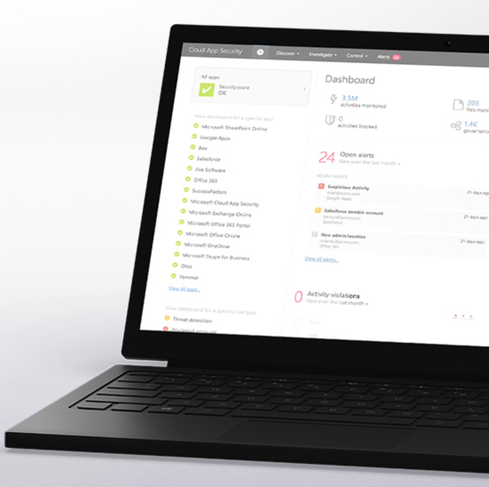 The creation of Cloud App Security is a result of Microsoft's investment in Adallom, an Israeli cloud security firm Redmond purchased for $320 million in July 2015. Adallom's focus was on cloud access security.

At the time its acquisition was first reported, people familiar with the deal reported Adallom's 90 employees would continue operating from Israel and work on Microsoft's cyber-security operations there. The Adallom purchase marked the latest in a string of acquisitions for Microsoft, which had previously snapped up Aorato and Equivio.

The rollout of Cloud App Security marks the latest addition to a secure platform Microsoft is building, first announced in February. In a blog post detailing the need for new technologies to protect and detect security posture, Microsoft CISO Bret Arsenault promised Cloud App Security would be available in April 2016.

Those interested in testing Cloud App Security can request a trial period for the service, and also access technical documents to help along the way.

Kelly Sheridan is the Staff Editor at Dark Reading, where she focuses on cybersecurity news and analysis. She is a business technology journalist who previously reported for InformationWeek, where she covered Microsoft, and Insurance & Technology, where she covered financial ... View Full Bio
We welcome your comments on this topic on our social media channels, or [contact us directly] with questions about the site.
Comment  |
Email This  |
Print  |
RSS
More Insights
Webcasts
SecDevOps: Tying Security to Your Application Development Processes
Profile of an Online Attack
More Webcasts
White Papers
Winning at Cyberrisk Management
Human Layer Security for Dummies
More White Papers
Reports
Special Report: Edge Computing: An IT Platform for the New Enterprise
How IT Security Organizations are Attacking the Cybersecurity Problem
More Reports

What Microsoft has done here is far-sighted. It's taken over some responsibility for security on the user side of the fence and made it available as a service. All public cloud providers should be doing this, and some third parties are doing it for Amazon Web Services. But there's probably much more to be done. The cloud represents a split in security responsibilities between customer and provider, and Microsoft has offered some best practices on a plate to customers.
Reply  |  Post Message  |  Messages List  |  Start a Board
Editors' Choice
Hot Topics