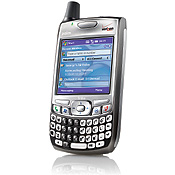 Research In Motion Ltd. now faces threats on two fronts: The possibility that the BlackBerry service will be shut down in a patent dispute and a new wireless E-mail platform that could steal away BlackBerry users.

With Palm Inc.'s release of the much-anticipated Treo 700w smart phone at last week's Consumer Electronics Show, RIM's competition just got tougher. The Windows Mobile-based Treo has all the essentials a businessperson on the go might need, including Microsoft Office applications and E-mail access.

The next version of the Microsoft operating system will include "push" E-mail that lets the Treo receive messages without periodically synchronizing with a server. With another wireless E-mail option on the market, especially one that doesn't require additional middleware, businesses are starting to look beyond the BlackBerry.

RIM's legal battle with NTP Inc. over patent infringement also is causing corporate minds to consider switching. Nobody wants to be stuck with hundreds of BlackBerrys and no service should NTP prove that RIM violated its patents.

But that's far from certain. On Dec. 30, in the second of three rounds of re-examinations of NTP's patents, the U.S. Patent and Trademark Office rejected seven out of eight. It rejected claims for all eight NTP patents in the first round. In the third round, rulings for all eight patents will be final, according to the patent office. The date of that re-examination hasn't been disclosed. As for further maneuvers in court, all legal briefs from NTP, RIM, and the Justice Department are due Feb. 1.

We welcome your comments on this topic on our social media channels, or [contact us directly] with questions about the site.
Comment  |
Email This  |
Print  |
RSS
More Insights
Webcasts
Now That Ransomware Has Gone Nuclear, How Can You Avoid Becoming the Next Victim?
Keeping the Business Running with Remote Network Management
More Webcasts
White Papers
2019 Software Exploits, a Technical Deep Dive into Vulnerabilities
Vulnerability Management for Dummies, 2nd Edition
More White Papers
Reports
The New Face of IT Automation
State of Cybersecurity Incident Response
More Reports

More Informa Tech Live Events
Now That Ransomware Has Gone Nuclear, How Can You Avoid Becoming the Next Victim?Securing Active Directory the Way it DeservesProtecting Mobile Apps and APIs from the Inside Out