Patients find a lot of good -- and bad -- healthcare information online. That's why doctors need to be as digitally literate as their patients.

7 Portals Powering Patient Engagement
(click image for larger view and for slideshow)
Medical education will probably never move at the pace of social media, but perhaps it ought to move fast enough that new doctors (as well as those in continuing medical education) understand how social media is changing the practice of medicine.

Digital literacy for doctors is important partly because digital media is so important to patients -- often the first place they turn for medical information, before they visit a doctor -- and physicians need to be prepared to encounter patients who may be either incredibly well informed or very misinformed by the information they've gathered online. There is another intersection of social media and medical education that I want to return to in another column, which is the opportunity for physicians to connect online and educate themselves and each other through social media (see #FOAMed). Here, I'm addressing the need to educate physicians on what they need to know about consumer use of the social Web.

That's what Bertalan Mesko aims to do with The Social MEDia Course, a series of online tutorials, as well as his book Social Media in Clinical Practice, published in August. As he argues in the book, "The only way to fight against pseudoscience and medical quackery is to take control of publishing medical information on the Web." Doctors need to be on social media to develop and protect their own reputations, as well as to understand the resources available and how they can be used or misused, he says. His book catalogs many types of social media and gives specific advice, such as a recommendation to turn down patient "friend" requests on Facebook unless that social profile is used solely for professional rather than personal interaction.

[ The future of medicine: What Two Healthcare Visionaries Get Right And Wrong. ]

Based in Hungary, Mesko is an M.D. and also holds a Ph.D. in genomics. Rather than practicing medicine, he has wound up doing business as a medical futurist, speaking widely on medical technologies and consulting with their developers, as well as teaching. Having always been a tech enthusiast, he says he realized about the time he was completing his Ph.D. that "my geek self might be a bit stronger than my doctor self."

Mesko's online course is based on one he originally taught on campus, he says, and he wrote the book after talking with an older doctor who felt he would learn the material better from a book than from an online course. Yet most medical schools have yet to allocate time in the curriculum for the subject. "Medical students should have access to many more resources than they do right now in medical school, so that when they try to enter the digital era, they will know where to go, where to start," Mesko says. Most medical students don't have a relevant course offered where they study, and many have thanked him for making a version of his course available online.

Meanwhile, many practicing doctors think of social media as a marketing channel, if they think of it at all.

While still in medical school, Mesko became active as an editor on Wikipedia, eventually working his way up to being one of the site administrators for medical information. While doctors might not think of Wikipedia as a reliable source of medical information, that's all the more reason to work on improving the quality of what is published there, Mesko says. 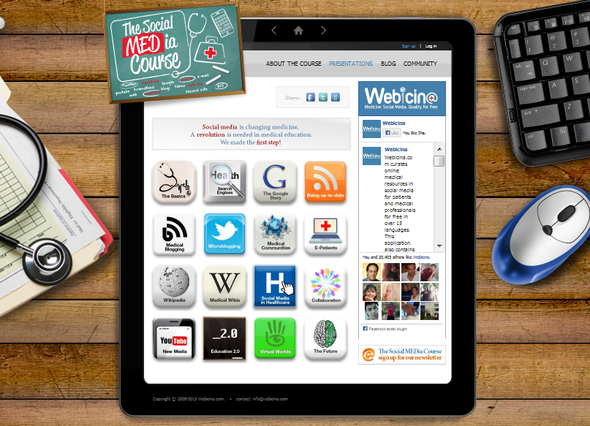 "The question is whether people are using it," Mesko says, and indeed they are as consumers increasingly seek medical information on the Web first. "If you do a search regarding medical information, whether a symptom, a disease, or a treatment, Wikipedia is usually one of the first three results. If patients are going there, it's the responsibility of medical professionals to make sure they find correct information."

Often, patients will walk into the office having obtained information from a source far less reliable than Wikipedia, Mesko says. In a sense, this is no different from what might have happened in the past if a patient found a book about his condition and came to the doctor with questions or theories based on that book. But with the proliferation of digital media, it's happening more often. "If a patient asks my opinion about a Facebook page, I ought to be able to make an assessment of the quality of that social media channel," he says, and not just with a knee-jerk answer. "Doctors should be able to give a proper evidence-based response. Every medical professional has to be able to assess the quality of these resources themselves."

Mesko has also seen how social media can benefit the practice of medicine itself. When he was in medical school, his professor was stumped by the case of a 16-year-old boy suffering recurring bouts of pancreatitis, so Mesko tried tweeting an abbreviated description of the case and received hundreds of responses, including a possible diagnosis, within 24 hours. The suggestion was to check for a condition caused by tiny stones in the gallbladder -- difficult to spot in conventional radiology, but possible to find if you know what to look for.

While there are more exclusive online communities for doctors, such as Sermo, public social networks can also be useful, if employed with proper caution for what information is shared and how, Mesko says. In his experiment with crowdsourced diagnosis, the responses came from physician friends, as well as people like medical librarians and patients who had experienced something similar. "If I had these people all in one room, I wouldn't have used the Internet," he says, but it worked because "everyone did what they were best at," including the patients describing their own experiences.

Getting time for this topic in the medical education curriculum is a major challenge, says Warren Wiechmann, an emergency medicine doctor who is on faculty at the University of California Irvine medical school and teaches a course on Health 2.0 and Digital Literacy on campus and on iTunes U. "If you don't make the course mandatory, because students have so much else on their plate, it's hard to get full enrollment," he says, but if he were to propose making it anything other than optional, he'd be told "you mean we're not going to teach students about anatomy for 12 hours so you can teach them about Facebook?"

UC Irvine was one of the first medical schools to give every incoming student an iPad loaded with course materials, but Wiechmann says he still doesn't believe students are adequately prepared -- neither for the impact of social media, nor for working with hospital technologies like electronic health records (EHRs). For example, medical students are still trained to take notes with pen and paper, when that is not what they'll be expected to do as practicing physicians, he says, and they get little exposure to EHR software.

"It's not just Facebook and Twitter; it's what is the next face of medicine going to be?" Wiechmann says.

Yet the social media dimension really is important, he says, agreeing that physicians have a responsibility to "curate the Web" and distinguish between good and bad information. "We get hours and hours of training on how to read through a journal article and just tear it apart," Wiechmann says. "We need a similar rubric like we have for journals for websites and apps."

Fortunately, there are some efforts to help physicians sort through these resources. He pointed to Happtique, which offers certification for valid medical and nursing education apps. Mesko's company, Webicina, also offers a curated directory of apps, blogs and other resources.

Guidance is there, or at least starting to emerge, for those doctors who seek it out.

Follow David F. Carr on Twitter @davidfcarr or Google+. His book Social Collaboration For Dummies will be published in October 2013.