Taking a cue from the technologies used in autonomous vehicles, students from the Massachusetts Institute of Technology (MIT) and automaker Ford have developed a small fleet of on-demand electric shuttles that can measure pedestrian traffic.

In addition, the project uses Light Detection and Ranging (LiDAR) sensors and inexpensive cameras to route the shuttles toward areas with the highest demand based on data-driven models, which could help improve ride-sharing efficiency.

LiDAR technology emits short pulses of laser light that precisely pinpoint the vehicle's location on a map and detect the movement of nearby pedestrians and objects. It's also considered to be far more accurate than GPS technology.

Researchers plan to introduce the service to a group of students and faculty in September. They will use a mobile app to order one of three electric shuttles to their location and request to be dropped off at another destination on campus. 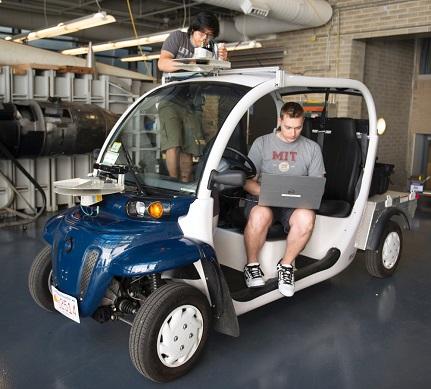 "The onboard sensors and cameras gather pedestrian data to estimate the flow of foot traffic," Ken Washington, vice president of research and advanced engineering at Ford, wrote in a July 27 statement. "This helps us develop efficient algorithms that bring together relevant data. It improves mobility-on-demand services, and aids ongoing pedestrian detection and mapping efforts for autonomous vehicle research."

The shuttles, which are small enough to be able to navigate the campus's sidewalks, come equipped with weatherproof enclosures that protect occupants from the harsh winters and inclement weather New England is famous for.

Other factors researchers will take into account during the testing phase will include class schedules, the habits of students and professors across different semesters, and weather conditions.

The research is being conducted by MIT's Aeronautics and Astronautics Department's Aerospace Controls Lab (ACL), which focuses on topics related to autonomous systems and control design for various types of vehicles.

[Read about Tesla gearing up production at its "Gigafactory."]

Ford also plans to use the technology and the data to improve its own Dynamic Shuttle project, which provides point-to-point rides to employees through a mobile application on its Dearborn, Mich., campus.

In addition to the advances the project offers in terms of pedestrian safety and sensor-based automotive technology, the collaboration between MIT and Ford is part of a broader, industry-wide effort to take ride-sharing programs to a new level.

Volkswagen's recent $300 million investment in Gett, for example, is based on a strategy to expand on-demand mobility services in Europe. Toyota and Uber announced they have entered into a partnership to start trials in countries where ride-sharing is expanding.

But it's not all about passengers and pedestrians. Uber recently updated its application to capture data about the way the company's drivers operate their vehicles, including measuring braking, acceleration, and speed.

The update also added notifications designed to promote better driving, like reminders to take breaks and to mount the phone used for the driver app on the dashboard, rather than keeping it in-hand. It adds daily driving reports that compare driving patterns to those of other drivers.

Nathan Eddy is a freelance writer for InformationWeek. He has written for Popular Mechanics, Sales & Marketing Management Magazine, FierceMarkets, and CRN, among others. In 2012 he made his first documentary film, The Absent Column. He currently lives in Berlin. View Full Bio
We welcome your comments on this topic on our social media channels, or [contact us directly] with questions about the site.
Comment  |
Email This  |
Print  |
RSS
More Insights
Webcasts
Protecting Your Enterprise's Intellectual Property
Building the SOC of the Future: Next-Generation Security Operations
More Webcasts
White Papers
The Trouble with Phishing
2020 SANS Enterprise Cloud Incident Response Survey
More White Papers
Reports
Are Unprotected Cloud Databases Leaking Your Data?
2020 State of DevOps Report
More Reports

While it's going to take some time before we see automated electric vehicles on the roads, these sorts of shuttles could give us a much better idea of what the early days of mainstream electric vehicles will be like.

In the UK they're testing a number of different shuttle types that are quite exciting.

Better yet, this sort of tech takes way less legislative action from politicians, which is one less hurdle to get over.
Reply  |  Post Message  |  Messages List  |  Start a Board
Editors' Choice
Hot Topics