A Chinese hoverboard vendor sees its booth stripped bare after US Marshals conducted a raid in the middle of CES.

An unusual event added to the frenzied rush of the 2016 CES in Las Vegas this week when US Marshals raided the maker of the Trotter electric skateboard, a Chinese firm called Changzhou First International Trade.

The raid followed a week-long effort from Silicon Valley startup Future Motion, which patented a similar type of hoverboard with one large wheel in the center. It calls its version the Onewheel, according to a Jan. 7 report in Bloomberg Business.

The news service reported that Future Motion sent around a half-dozen people from its legal team to accompany federal agents during the raid, where marshals removed not only the sample products, but also signage and other display materials, leaving the booth bare.

In addition, marshals served a court order to Changzhou First at the convention, Lynzey Donahue, a US Marshals official, told Bloomberg Business.

Future Motion recently received a patent for the design of the Onewheel that prohibits rival companies from manufacturing a device that could be confused at first glance with the Onewheel.

"Would we have done this without the design patent being issued? The answer is we wouldn't have bothered," Shawn Kolitch, a lawyer for the company, told Bloomberg Business. "If you can show the design patent drawing next to an accused product side by side, and they look identical, it helps your case." 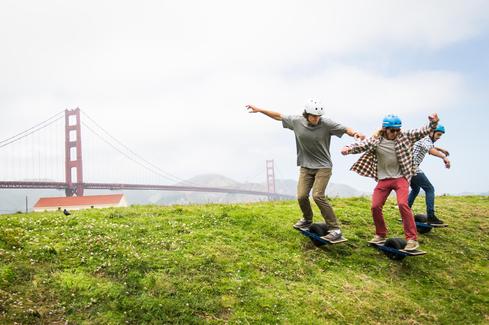 Future Motion first debuted the Onewheel, which it bills as a self-balancing electric skateboard -- despite the media's insistence on calling it a hoverboard -- at CES in 2014. It followed that with a successful Kickstarter campaign.

Consumers can now purchase the Onewheel (and charger) for $1,500, although the Trotter was reportedly advertised at CES for less than half that price.

"Inspired by the feeling of snowboarding on powder, this two horsepower beast turns pavement into your playground," Future Motion's Kickstarter page stated. "Onewheel's dynamic stabilization creates lean-to-go control and allows you to carve silky smooth heel and toe turns on and off road."

The app-connected device has a six to seven mile range and runs on lithium batteries that can be recharged in 20 minutes. It sports intelligent LED lighting, uses a brushless hub motor, and reaches a top speed of 15 mph.

Future Motion founder, Onewheel inventor and chief engineer Kyle Doerksen, who spent eight years designing consumer and technical products at IDEO, a design and innovation firm, told Bloomberg Business he was interested in protecting the legitimacy of a widely publicized type of transport.

[Read about the smartwatches announced at CES 2016.]

"If customers start to view the space as full of low-quality, low-cost products, that reflects poorly on everybody," Doerksen told the news service. "We hate to see someone poison the well."

The semi-futuristic devices have taken a battering in the media following multiple reports that they have caught fire, including one incident in Melbourne where a hoverboard burned a house down after igniting while charging. New York City saw its first, less damage-causing report of a hoverboard bursting into flames in Brooklyn last week.

While the potential fire and explosive hazards have few people laughing (The University of Connecticut and all major airlines have banned hoverboards.) a humorous viral video making the rounds demonstrates a quick and easy way to ensure your hoverboard won't burn up.

Nathan Eddy is a freelance writer for InformationWeek. He has written for Popular Mechanics, Sales & Marketing Management Magazine, FierceMarkets, and CRN, among others. In 2012 he made his first documentary film, The Absent Column. He currently lives in Berlin. View Full Bio
We welcome your comments on this topic on our social media channels, or [contact us directly] with questions about the site.
Comment  |
Email This  |
Print  |
RSS
More Insights
Webcasts
The Experts Guide to Ransomware Response
Multi-Cloud Data Management for Modern Applications
More Webcasts
White Papers
Managed Threat Detection and Response
World Wide Technology: Digital Transformation Customer Journey
More White Papers
Reports
Immuta Data Engineering Survey: 2021 Impact Report
Building the SOC of the Future
More Reports