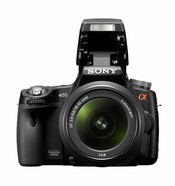 The Alpha SLT-A33 and Alpha SLT-A55V can continuously and quickly focus while shooting stills and recording full HD video at 1080p, Sony says. The A55V can shoot continuously at up to 10 frames per second, the "fastest in the industry" for interchangeable-lens digital cameras that sell for less than $1,000. The A33 shoots at speeds up to seven frames per minute.

"This is the most innovative interchangeable-lens digital camera that Sony has ever created," Kristen Elder, director of the digital imaging business group for Sony, said in a statement released Monday. "Our translucent mirror technology is one of the most significant SLR (single-lens reflex) structural changes in more than a decade."

The technology enables light passing through the lens to be simultaneously received by the cameras' CMOS active pixel image sensors and the auto-focus sensors. The simultaneous reception is what drives the continuous shooting and focusing at relatively high speeds.

In addition to boosting shooting speeds, the translucent mirror technology makes it possible to reduce the camera's body size by eliminating the moving parts needed to manipulate the internal mirror for focusing images in other DSLR cameras, Sony says. Professional photographers prefer DSLR, or digital single-lens reflex, cameras because of their picture quality and support for interchangeable lenses.

The A55V has a 16.2-megapixel image sensor, while the A33 has a 14.2-megapixel sensor. Both cameras have a 3-inch LCD display of sufficient brightness to use in low-light situations. The cameras have ISO settings of 100 to 12,800, which means the devices are able to take pictures in difficult lighting conditions.

The A55V has a built-in GPS for adding geo-location coordinates to images and video, along with date and time. Both cameras have HDMI ports for connecting to a television, and both support Sony's Memory Stick PRO Duo or SDHC and SDXC cards for external storage.