SEARCH
A minimum of 3 characters are required to be typed in the search bar in order to perform a search.
Announcements
Report
Find out what you need to know so that you can plan your next career steps and maximize your salary.
Event
Explore strategies, new technologies, and best practices to provide a secure infrastructure - Learn more at Interop!
PreviousNext
Mobile
News

MIT's SENSEable City Lab worked with the city of Florence, Italy, to give commuters a way to browse the Web, create their bus routes, and determine the exact location of oncoming buses.
W. David Gardner
Contributor
May 26, 2009 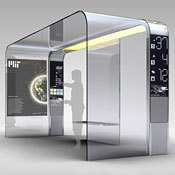 Welcome to the 21st century's version of waiting for the bus.

A group of MIT architects and engineers has developed an interactive solar-powered bus stop for the city of Florence, Italy, that enables waiting passengers to browse the Web, create their bus routes, and determine the exact location of oncoming buses.

Unveiled in recent days, the EyeStop was developed at MIT's SENSEable City Lab.

"Interacting with EyeStop could change the access to urban information in a similar way to how the iPhone has changed our mobile life," said MIT operation's Carlo Ratti, who leads the SENSEable City effort.

The MIT group suggests that individual bus stops can be tailored to their particular settings, for instance, taking advantage of sunlight exposure for direct photovoltaic powering. Using a touch screen in the EyeStop, a bus rider can indicate a desired destination; the system lights up with the shortest route. As the bus approaches, the EyeStop shelter glows brighter and brighter.

For bus riders, the EyeStop could dovetail with the growing pervasiveness of location-based services as smartphones increasingly spread among consumers. More than 2,400 location-based applications, for instance, have been created for Apple's iPhone and are available at its App Store.

Ratti said a working prototype for Florence will cost $120,000. "Since the Renaissance, there has been an interplay between the physical form of the city and its citizenship," said Ratti. "Today's technologies are adding new possibilities to that age-long relationship, thanks to the addition of digital information to physical space."

The EyeStop also has green overtones, because it can act as an active environmental sensing node, gathering information through sunlight as it collects information about air quality.


What's the state of wireless adoption in the enterprise today? Take part in our survey by June 2 and let us know. Upon completion, you'll be eligible to enter a drawing to receive one Apple 16-GB iPod Touch valued at $299.