MIT researchers have developed a system called RF-Capture that can track motion like Microsoft's Kinect, except that it works through walls.

RF-Capture, described in a paper (PDF) accepted for next week's SIGGRAPH Asia conference, demonstrates that signals in the same frequency range as WiFi can locate people in a room through a wall, distinguish people based on body outline, and track movements and the positions of limbs.

Other methods of tracking human motion exist, but they can have disadvantages in certain situations. For example, Microsoft's Kinect system, used to track motion for gameplay, relies on infrared light. It requires direct line-of-sight and thus can be blocked by intervening obstacles. Traditional cinematic motion-capture techniques rely on sensors affixed to the subject, and may not be practical or desirable. 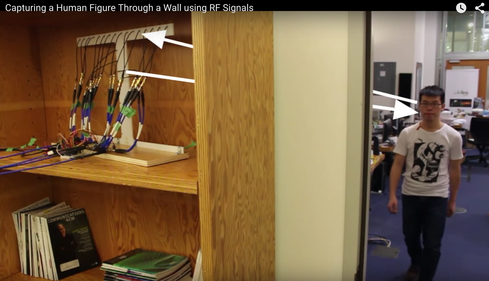 Then there are radar-based systems like airport security scanners that use millimeter or submillimeter waves. Some of these, as the researchers explain in their paper, can image human skeletons accurately, but they're costly, bulky, useful only over short distances, and can't deal with obstructions.

There are also radar-based systems like Camero's Xaver line that employ centimeter waves (3-30 GHz), the portion of the electromagnetic spectrum used for WiFi and RF-Capture (5-7 GHz). These systems are designed to provide situational awareness of enclosed spaces for military and law enforcement operations. While they may be well-suited for identifying the locations of people in rooms, those through-wall imaging systems, the researchers claim, cannot track human limbs accurately or construct a human figure. 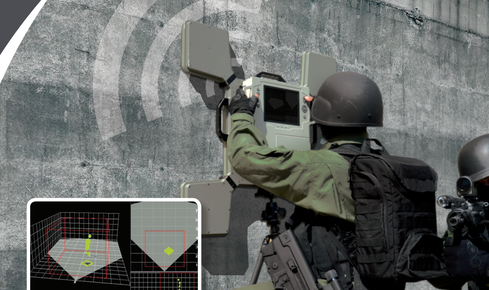 RF-Capture can track limbs with an accuracy of 92%, according to the researchers, who say their system tracks motion about as well as Kinect.

The technology is already headed to market in the form of a device called Emerald that monitors multiple rooms using radio waves to detect whether an elderly or infirm person has fallen and may need assistance.

[Read Electronic Warrantless Surveillance: What IT Should Know.]

While the researchers note that RF-Capture could enhance systems like Xbox Kinect by making motion-tracking function across rooms, they also note the ability to track human motion has surveillance applications.

The New York City Police Department has been using vans equipped with x-ray scanners to conduct drive-by bomb searches. With further refinement, RF-Capture might prove useful for drive-by manhunts or related law enforcement efforts, not to mention all sorts of commercial and corporate presence-detection applications. Privacy-minded individuals may wish to start looking at Faraday-cage housing.

Thomas Claburn has been writing about business and technology since 1996, for publications such as New Architect, PC Computing, InformationWeek, Salon, Wired, and Ziff Davis Smart Business. Before that, he worked in film and television, having earned a not particularly useful ... View Full Bio
We welcome your comments on this topic on our social media channels, or [contact us directly] with questions about the site.
Comment  |
Email This  |
Print  |
RSS
More Insights
Webcasts
Protecting Your Enterprise's Intellectual Property
Making Cybersecurity Work in Small and Medium-Sized Businesses
More Webcasts
White Papers
How to Prioritize Risk Across the Cyberattack Surface
How to Compete in Financial Services IT
More White Papers
Reports
The Malware Threat Landscape
Email Security Threat Report 2020
More Reports

Wow, this seems like really neat technology.  I hadn't thought of an application to check if an elderly patient had fallen out of bed or not ,which would be great if it could be wired to a caregivers monitor so the older person could have some independence. Are there any drawbacks here like radiation issues with more exposure, or is it deemed relatively safe?
Reply  |  Post Message  |  Messages List  |  Start a Board

A better picture or video of what is shown on the screen would be helpful.  It looks like an image of the person in 3-D is shown.  How about a video showing the detection of a person walking on the other side of the wall.

What happens if there are multiple people and they overlap?
Reply  |  Post Message  |  Messages List  |  Start a Board

I wonder if this radiation is harmful for humans. This is the key to decide the applications where this technology could be applied.
Reply  |  Post Message  |  Messages List  |  Start a Board

@shakeeb I trust this days no escape from radiation.... it like everywhere... small amounts... sad reality of the techno age...
Reply  |  Post Message  |  Messages List  |  Start a Board

This certainly seems like a game changer. Reading how it stacks up to existing technologies (something I know next to nothing about) makes it pretty plain to see what sets this technology apart. I like how modest the researchers seem to be in saying that the accuracy drops to 'only' 88% with fifteen subjects - to me, that's insane. The elder support product is definitely a great showcase for the positive impact of something like this; best to get out in front before peope go nuts with pie in the sky theories about it being used to spy on our every move.
Reply  |  Post Message  |  Messages List  |  Start a Board
Editors' Choice
Hot Topics