50%
Tweet
Apple has officially confirmed its Sept. 9 event with a typically mysterious invitation. The company is expected to roll out the iPhone 6s, along with Siri and Apple TV updates.

Apple's tradition of upgrading its flagship smartphone -- the iPhone -- every September appears to be continuing apace, with the company sending out digital invitations for a special event to be held on Sept. 9 in San Francisco.

The event, which will be held at the Bill Graham Civic Auditorium in the city's downtown, will likely show off new features for the latest iteration of the iPhone -- the iPhone 6s -- which is expected to include Apple's Force Touch technology and improvements to digital concierge Siri.

The most anticipated feature on the updated phones is Force Touch, a technology that detects the force of a tap on a touchscreen and responds differently to variations in pressure. 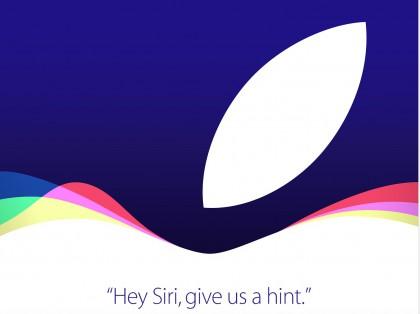 The sensory capabilities of the Force Touch trackpad allow users to tell the MacBook what they want it to do based on subtle differences in the amount of pressure they apply.

Force Touch is also a feature of the Apple Watch, where it uses tiny electrodes around the flexible Retina display to distinguish between a light tap and a deep press, and then trigger access to a range of contextually specific controls.

With Force Touch, a firm press on the screen brings up additional controls in apps like Messages, Music, and Calendar. The feature also lets users select different watch faces, pause or end a workout, and search an address in Maps.

Among the other rumored upgrades to the iPhone 6s are a faster A9 processor, an improved 12-megapixel camera, and 7000 series aluminum, which is more durable, and also used on the Apple Watch.

In typical Apple fashion, the invitations provide little information except for the cryptic tagline, "Hey Siri, give us a hint."

In addition to updates for the iPhone 6s and 6s Plus, the company may also debut updates to Apple TV, its digital media player.

Although Apple has reportedly scrapped plans for a more ambitious evolution of its set-top box, the company, which has not updated Apple TV since 2012, is rumored to be announcing the inclusion of Siri.

Difficulties in negotiations between Apple and television content providers such as CBS and 21st Century Fox have resulted in the company pushing back the launch of its Live TV service into 2016, instead of next month, according to a recent report in Bloomberg Business, which cited unnamed sources familiar with Apple's plans.

With sales of the iPhone, Apple's main revenue generator, expected to slow as the global smartphone market approaches the saturation point, the company is looking toward streaming services to keep company growth consistent.

Nathan Eddy is a freelance writer for InformationWeek. He has written for Popular Mechanics, Sales & Marketing Management Magazine, FierceMarkets, and CRN, among others. In 2012 he made his first documentary film, The Absent Column. He currently lives in Berlin. View Full Bio
We welcome your comments on this topic on our social media channels, or [contact us directly] with questions about the site.
Comment  |
Email This  |
Print  |
RSS
More Insights
Webcasts
Effective Cyber Risk Assessment and Measurement
Get Your Security Tools Talking for More Effective Incident Response
More Webcasts
White Papers
[Forrester Research] The State of Data Security & Privacy
2020 Gartner Market Guide for Network Detection & Response
More White Papers
Reports
How IT Security Organizations are Attacking the Cybersecurity Problem
2020 State of DevOps Report
More Reports

I take the opposite viewpoint: That a company that releases a product before it's ready deserves all the bad press it gets.

I don't think it's a matter of consumers being spoiled.  "In the old days," when something didn't work, it didn't work, and we'd be really annoyed about it and about the fact that we spent good money on it -- but we had no way of airing our frustrations to the world.  Now, in the Internet age, we can do that and companies are compelled to take heed.
Reply  |  Post Message  |  Messages List  |  Start a Board

That is the marketing strategy from Apple. Get the public hyped up enough for them to be shelling out thousands of dollars for a phone.
Reply  |  Post Message  |  Messages List  |  Start a Board

@progman2000: I wouldn't say things like "go for the iPhone, you won't regret it" because surely you will. The iPhone is all looks and brand value than actual usability. I would say it it like a dumb supermodel. Buy the OnePlus Two. That is one beast of a phone.
Reply  |  Post Message  |  Messages List  |  Start a Board

The iPhone 6 is a good device with good specs but agreeing with Sunita, I too feel that the iPhone is restricted against its own good. Given the hardware it is surprising to see it would be so dumbed down.
Reply  |  Post Message  |  Messages List  |  Start a Board

I am firmly in your camp - I can't see myself ever owning one, and don't get the iPhone people that say how much better the iPhone is than every other alternative out there.

The one thing that has always impressed me about the phone is it's form factor - it always seems to be an extremely hand friendly device. That said, I haven't held the new, larger ones.
Reply  |  Post Message  |  Messages List  |  Start a Board

I agree wholeheartedly Joe. It's just so funny that the people who complain about how long it takes to get the new phone and balk when delivery dates get pushed back then get pissed about bugs in a phone that was rushed to market. Consumers today are pretty damn spoiled.
Reply  |  Post Message  |  Messages List  |  Start a Board

Everybody bashes everybody.  I'd really like to see an update on this (semi-NSFW) video series with an Android character.
Reply  |  Post Message  |  Messages List  |  Start a Board

Do I think the early adopters are silly?  Sure.  But they're great for me because they're like a very vocal group of testers before I get around to trying a new Apple product or software update.  They're like canaries.  ;)
Reply  |  Post Message  |  Messages List  |  Start a Board

Shocking to hear an iPhone user say the usability of iOS is limited. I always feel like iPhone enthusiasts go out of their way to bash Android but never understood why? I am a longtime Android user and have never had issues.
Reply  |  Post Message  |  Messages List  |  Start a Board
Page 1 / 2   >   >>
Editors' Choice
Hot Topics