Growth in the tablet market is slowing rapidly. With the market recording two weaker-than-expected quarters in a row, it may be time to rethink just how strong demand is for slates and convertibles. IDC's tablet tracker has lowered its forecasts for the year. It now believes hardware vendors will ship 233.1 million units. That gives the market a 6.5% growth rate for the year, but that's down significantly from the 12.1% growth rate forecast earlier this year.

"When we look at the global picture, it would be easy to say that the tablet market is slowing down," said Jean Philippe Bouchard, IDC's research director for tablets. "But, when we start digging into the regional dynamics, we realize that there is still a good appetite for this product category. While mature markets like North America and Western Europe will combine for flat unit growth in 2014, the remaining regional markets will generate 12% unit growth over the same period."

Sales of large-screened smartphones have taken a major chunk out of small tablet sales. Many consumers opt for the biggest phones they can afford, which often rival tablets in size. In the US, consumers who opt also for a tablet tend to pick full-sized models with screens near 10 inches.

"Driven primarily by small devices, we expect the rest of the world to account for the majority of shipments in the years to come," said Jitesh Ubrani, senior research analyst for IDC. "But in terms of dollars spent, medium- to large-sized devices in North America and Western Europe will still produce significant revenues." 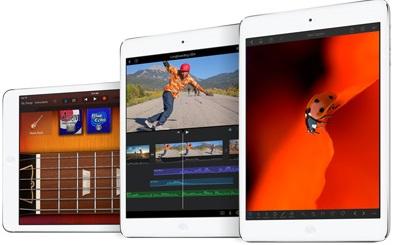 Apple remains bullish on the tablet market. Speaking to Re/Code, Apple's Cook said, "We couldn't be happier with how we've done with the first four years of the iPad. I’d call what's going on recently a speed bump, and I've seen that in every category." Apple is believed to be working on a 12.9-inch iPad it will pitch to mobile professionals and productivity-minded businesses.

One reason IDC believes emerging markets will fuel growth for the tablet sector is the rise in adoption of voice-enabled tablets. Its data shows shipments of tablets that include optional voice calling over cellular networks (previously reserved for cellphones) grew 60% year-over-year and accounted for 25% of all tablets shipped in the Asia/Pacific region during the second quarter. Whether consumers buy large-screen phones or small-screen tablets that can make voice calls, the trend is clear: People want one device that serves as both tablet/computer and voice telephony tool.

It will be interesting to see if tablet makers bring true cellular-based voice calling to devices sold in the US. To date, American carriers have balked at the idea. For example, AT&T stripped the voice-calling feature out of a Samsung tablet in 2013. For the time being, they appear to be happy offering smartphones for $50 or $60 per month with tablets serving as add-ons.

Offering voice-enabled tablets could be a catalyst for growth for such devices in the US. Without such new and interesting features, consumers may stick with the larger hardware (with a longer replacement cycle) as laptop replacements/companions.

Eric is a freelance writer for InformationWeek specializing in mobile technologies. View Full Bio
We welcome your comments on this topic on our social media channels, or [contact us directly] with questions about the site.
Comment  |
Email This  |
Print  |
RSS
More Insights
Webcasts
The Best Ways to Stop Malware and Ransomware That No One Else Will Tell You
Effective Cyber Risk Assessment and Measurement
More Webcasts
White Papers
2020 Gartner Market Guide for Network Detection & Response
How You Can Evaluate Your Org's Cybersecurity Readiness
More White Papers
Reports
IT Automation Transforms Network Management
Connecting the Dots: Key strategic opportunities in a post-COVID-19 world
More Reports

While yes, we can argue that folks are looking for device consolidation and so those who have tablets and smartphones are starting to upgrade to phones with larger screens to phase out tablets in some aspect, I think the cause of the slowdown is even simpler; we've oversaturated the market.

Most folks who want a tablet, be it iOS, Android or another operating system, have purchased that tablet in the last few years.  Unless they need an upgrade or need to replace, there's no need to purchase another tablet.  And since these devices are relatively simpler in terms of operation, they don't need as quick a replacement as many laptops, which means the IT buying cycle is much longer.  Even so, once they do upgrade their device, they create a secondary market when they sell or trade in their old device.  So will we ever see the same tablet shipment forecasts like we did years ago? I don't think so, unless there is a huge technological overhaul, I think it's going to keep a steady single digit for awhile to come.
Reply  |  Post Message  |  Messages List  |  Start a Board
Editors' Choice
Hot Topics

More Informa Tech Live Events
Automating Security Functions in Your EnterpriseQuantifying the Benefits of a DevOps StrategyEdge Computing: An IT Platform for the New Enterprise