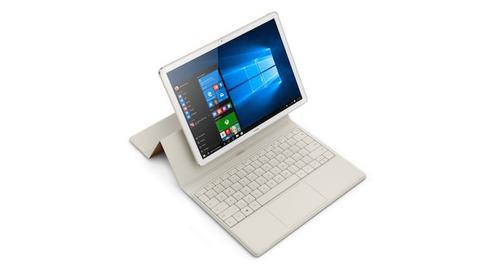 The MateBook is Huawei's first desktop device. The 2-in-1, which measures 6.9mm in thickness, has a 12-inch 2160x1440 screen and runs on a sixth-generation Intel Core M processor.

Other specs include 4GB or 8GB RAM, and options for 128GB, 256GB or 512GB SSD. The MateBook has a fingerprint reader, 5MP front-facing camera, and fingerprint reader for authentication via Windows Hello. A 4430 mAh battery lasts a promised 10 hours. However, the device does not come with compatible accessories including the MatePen, MateDock, or the MateBook Portfolio Keyboard, which also acts as a laptop stand.

The MateBook will roll out "in the coming months," says Microsoft, starting in the US, Europe, and Asia.

Compared to an android device using a windows device is more complex when it comes to using it form a touch screen device. I am sure Microsoft will not be able to make windows simple like Android.
Reply  |  Post Message  |  Messages List  |  Start a Board

I think we are so used to using Windows hence we see the need of having a windows tablet. But actually windows was not initially designed with the intention of having it on mobile devices.
Reply  |  Post Message  |  Messages List  |  Start a Board

@ mejiac – Not all apps support Windows 10 that's one reason why IT teams are reluctant to implement Windows 10 on their devices. Most custom made software too have an issue and needs an update to fix.
Reply  |  Post Message  |  Messages List  |  Start a Board

I want this hybrid device to have more specs such as the space and the RAM because this needs to run 2 operating systems and has a high probability that it would get stuck often.
Reply  |  Post Message  |  Messages List  |  Start a Board

I think Microsoft should only push necessary updates for Window 10 tablets else it will eat up the memory and processing power.
Reply  |  Post Message  |  Messages List  |  Start a Board

Its indeed good news for Microsoft, we now see many users having Windows 10 their tablets. Now you could easily do your office work on the go.
Reply  |  Post Message  |  Messages List  |  Start a Board


I really like the hybrid devices I am looking forward to the day when I can reduce the number of devices I have and the upgrading that seems endless! Hopefully these new devices with reduce of technology pollution and increase our productivity, I also think the prices are attractive.

I'll just share my experience with my Panasonic: it originally ran Windows XP. All the custom hardware drivers developed by Panasonic were loaded and were working fine. When I upgraded to Windows 7 there were a couple of missing drivers. I had to go to Panasonic to download them for Windows 7. They generally work well. I did say that my Panasonic laptop is running like a champ in my previous post, but that's only 99% true. The AMD GPU drivers, for reasons unknown (isn't that the case more than we want to acknowledge?) stops working and then restarts. It's not a big problem since I don't lose any work, but it isn't a great experience. Windows 10 is two OS generations after Windows 7, so I don't know for sure that it won't work, but it's highly likely that some driver won't work perfectly.

(What I need from an operating system right now Windows 7 fulfills it well. Windows 10 doesn't provide any benefits to me that I need, so I don't see why I would want to start on the path of searching for graphics drivers, reading forums for solutions, buying new hardware if necessary, etc. I'm guessing there are millions of others who are in the same boat as me.)
Reply  |  Post Message  |  Messages List  |  Start a Board

Does Windows 10 have serious hardware compatibility issues? I'm guessing no, since it is mostly pushing stuff towards the cloud, but it's something I hadn't even considered...
Reply  |  Post Message  |  Messages List  |  Start a Board

In my experience with a Lenovo desktop PC running Windows 7, it wasn't Microsoft shoving the upgrade to Windows 10 down my throat but a constant nagging. Every day, multiple times a day, Microsoft would poke at me to upgrade to Windows 10. Again and again. Non-stop nagging. So I finally gave in. It wasn't too bad since I don't have a lot of legacy apps. I've moved a lot of my workflow to web-based apps/services so upgrading the operating system doesn't affect much of what I do.

Now my Panasonic laptop still runs Windows 7 like a champ and I'll continue using Windows 7 until Microsoft stops providing security patches for it (has Microsoft stopped already?). The reason is because most operating systems get bigger, more bloated, does more things (most of which we don't need/want), and requires faster hardware. My Panasonic's hardware is perfectly matched up with Windows 7 as of now. And if I upgrade to Windows 10 and there are some incompatibilities that force me to upgrade to new hardware... I wouldn't like that. I don't like rough waters; I like smooth sailing.
Reply  |  Post Message  |  Messages List  |  Start a Board
Page 1 / 2   >   >>
Editors' Choice
Hot Topics