A flood of leaks suggest the next phablet from Samsung will arrive in early August with a new name and amped up specs.

Samsung is preparing its next Note-branded phablet for a reveal later this summer, and the phone will be different from its predecessors in more ways than one.

The first departure will be the name itself. Samsung is going to skip a generation in order to catch the Note series up to its popular S series smartphones.

Were Samsung to follow the path it has always followed, this year's phablet would be the Note 6. It appears the naming convention has left some consumers confused as to the order of things, so the Note series will skip a number.

Over the weekend, serial leaker Evan Blass found an image of the device's logo that clearly reveals the name "Galaxy Note 7." Later, Blass posted another logo image for the "Galaxy Note 7 Edge." The leaks, if reliable, come close to confirming two things: 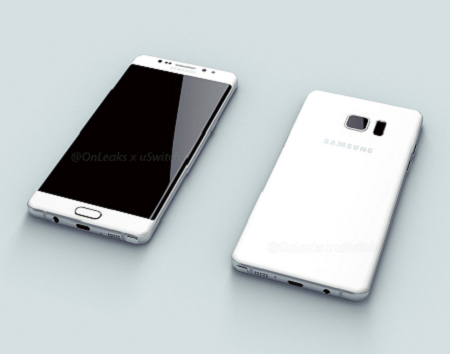 (Image: Leaked image of Samsung Galaxy Note 7 via @OnLeaks on U Switch)

What will the Note 7 offer? Plenty. The biggest differentiating feature will be the addition of an iris scanner. As we've seen on other handsets, iris scanners are primarily used to biometric security measures. The scanner may serve as a backup method to verifying the owner's identity.

The defining feature of the Note series is, of course, the display. The Note 7 will feature a 5.7-inch quad HD AMOLED display. That's the same size and resolution of last year's Note, a display that was hailed as the best ever.

The Note 7 will adopt several of the Galaxy S7's best functions. To start, it will have a 12-megapixel main camera and a 5-megapixel selfie camera. This is the same setup on the S7/S7 Edge, which both capture excellent photos.

Perhaps more important, the Note 7 will receive an IP68 certification, making it waterproof. The IP68 rating means the phone can sit in several feet of water for up to 30 minutes with no fear of damage. That's a big deal for all those klutzes out there.

The phone's internals will likely mirror those of the Galaxy S7, which means a Snapdragon 820 processor, 4GB of RAM, a generous allotment of internal storage, and support for expandable memory cards.

One of the biggest question marks concerns the battery. Samsung improved the size of the S7's battery significantly this year (from 2,600 mAh to 3,000 mAh). The Note 5 had a 3,000 mAh battery, leading many to hope the Note 7 would jump up to 3,400 mAh or more.

Samsung is expected to announce the Galaxy Note 7 at an event on August 2, according to a leaked invitation to a Galaxy Unpacked event. The company has not confirmed any of these details.

Eric is a freelance writer for InformationWeek specializing in mobile technologies. View Full Bio
We welcome your comments on this topic on our social media channels, or [contact us directly] with questions about the site.
Comment  |
Email This  |
Print  |
RSS
More Insights
Webcasts
What We Can Learn from Sports Analytics
Protecting Your Enterprise's Intellectual Property
More Webcasts
White Papers
Passwordless: The Future of Authentication
Universal Internet Connectivity: Reality or Myth?
More White Papers
Reports
2020 Threat Hunting Report
2020 State of Cybersecurity Operations and Incident Response
More Reports