SEARCH
A minimum of 3 characters are required to be typed in the search bar in order to perform a search.
Announcements
Report
How does your salary stack up? 2022 IT Salary Survey Results Revealed
Event
Learn about the latest technologies that are revolutionizing identity governance and access management
PreviousNext
Productivity/Collaboration Apps
2 min read
article

The Pixon12 will will feature a high-resolution camera, as well as the ability to quickly upload pictures to online photo-sharing sites.
Marin Perez
Contributor
June 01, 2009 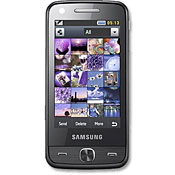 The Pixon12 is a touch-screen phone that packs a 12-megapixel camera, which is the highest-resolution camera currently on a phone. The phone comes packed with software to help users take better shots, as the autofocus software will automatically adjust the camera's mode depending on the object, background, and lighting.

Users can organize and manage these photos through various categories, and pictures can be uploaded to sites like Flickr, MySpace, Facebook, and Picasa with a few clicks. The Pixon12 also has a Xenon flash, face-detecting software, and the ability to geotag photos using the integrated GPS chip.

"The Pixon12 is testament to how Samsung's ongoing consumer research enables us to develop ground-breaking products that do not just meet but surpass our customers' expectations," executive VP J.K. Shin said in a statement. "Speedy access to the camera mode, fast shutter speed, and quick browsing are some of the key factors consumers are looking for in their mobile phone cameras."

The handset has a 3.1-inch AMOLED (active-matrix organic light-emitting diode) touch screen that should provide vibrant colors and a crisp contrast ratio. The Pixon12 has EDGE, 3G, and integrated Wi-Fi for users to surf the Web and share photos. Samsung's camera phone will also be a strong multimedia player, has Bluetooth, and the memory can be expanded up to 16 GB via the MicroSD slot.

Cell phone manufacturers are increasingly upping the ante with a mobile phone's camera, and Samsung will be beating the completion to the market when it releases the Pixon12 at the end of June. Sony Ericsson also has a phone with a 12-megapixel camera, but the Satio won't be released until the fourth quarter.