SEARCH
A minimum of 3 characters are required to be typed in the search bar in order to perform a search.
Announcements
Alert
Got some free time? Grow your knowledge from the comfort of your computer for FREE!
Alert
Are you looking to stay on top of IT trends? Check out our FREE webinars and virtual events!
Alert
Planning for 2023? Be sure to check out our upcoming in-person events!
Report
How does your salary stack up? 2022 IT Salary Survey Results Revealed
PreviousNext
Software
2 MIN READ
News

The June 1 issue of the magazine was created with a $5 app for the iPhone, showing how far the App Store has come into the mainstream.
Marin Perez
Contributor
May 26, 2009 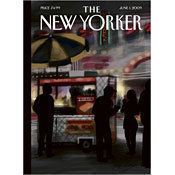 Need to create the cover painting for The New Yorker? For artist Jorge Colombo, there's an iPhone app for that.

The artist used the $4.99 Brushes mobile application to create the portrait, which includes blurred images of a crowd gathered in front of the Madame Tussauds Wax Museum in New York. The app enables users to create layered virtual paintings that use several realistic brush techniques, as well as hue and saturation control.

Colombo said he appreciated the app because it lets him work on the go without having to carry all of his painting equipment, and it also didn't draw attention from potential subjects.

"Absolutely nobody can tell I am drawing," Colombo told the New York Times. "In fact, once I was doing the drawing at some place, and my wife was around, and they asked her why did I have to work so hard? I seemed to be always on my iPhone sending messages."

The cover painting is a sign of how successful Apple's App Store for the iPhone and iPod Touch has been with the mainstream audience. Mobile apps have been available for years from places like Handango and Mobihand, but the App Store has brought these apps to the forefront of the mobile industry. Apple has seen more than 1 billion downloads since it was opened to the public about a year ago.

The success hasn't gone unnoticed by Apple's rivals, as competitors have launched their own versions of over-the-air stores for customers to search, buy, download, and install apps. Android, BlackBerry, and Nokia have launched virtual stores for mobile content, and Microsoft will launch its Windows Marketplace for Mobile in the fourth quarter.


Take part in our survey on regulatory compliance by May 29 and be eligible to win an Apple iPod Touch valued at $299.