Microsoft has announced changes to its corporate structure and leadership team that will result in the departure of senior executives, including former Nokia CEO Stephen Elop, Kirill Tatarinov, and Eric Rudder. All will leave Microsoft following a transitional period.

We've been hearing a lot over the past few months about how three ambitions have become the crux of CEO Satya Nadella's focus for Microsoft's future: Creating more personal computing, reinventing productivity and business processes, and building the intelligent cloud.

"We are aligning our engineering efforts and capabilities to deliver on our strategy and, in particular, our three core ambitions," said Nadella in a June 17 news update. "This change will enable us to deliver better products and services that our customers love at a more rapid pace."

Some industry watchers saw this coming. "I wasn't surprised by the fact that there was going to be an executive shake-up," noted Charles King, principal analyst at Pund-IT, in an interview with InformationWeek.

Nadella is no longer brand-new to Microsoft's helm, King explained. It takes a few months for an executive to get the lay of the land and make strategic decisions. A new CEO appointment usually leads to an immediate "rush to the door." A second shuffle follows a few months later.

Elop, who took over Microsoft's hardware device business following the Nokia acquisition, will leave Microsoft as a result of the most recent shakeup. His exit, while newsworthy, isn't necessarily a shock.

Given Nokia's hefty price tag, there were plenty of high expectations for the changes Elop would bring to Microsoft's mobile business. To date, none of these predictions came to pass, and mobile is still sluggish in Redmond. King mentioned that despite his lack of success, full blame for the struggling mobile division should not solely rest with Elop.

After all, it's tough to compete with the likes of Apple and Google.

Now mobile projects will fall to a new team, the Windows and Devices Group, which will combine the engineering efforts of the current Microsoft Devices Group and Operating Systems Group. Executive VP Terry Myerson will lead the division's efforts to enable more personal computing on Windows devices like Surface, Lumia, Xbox, Microsoft Band, and HoloLens. 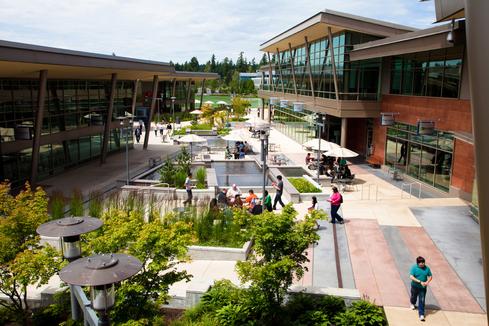 It's no coincidence that these streamlining efforts are taking place almost one month before Windows 10 launches on July 29. The new OS represents a new Microsoft, said King -- one that is moving toward a future in which its products are linked together. An executive shuffle so close to a key launch represents a matter of cleaning house and ensuring everyone is on target for the latter half of 2015.

"Layoffs at such a critical time suggest we'll be seeing different types of moves from the company and products coming down the pipe."

Chief insight officer Mark Penn will also be leaving Microsoft in a move reportedly unrelated to the organizational changes. According to a Wall Street Journal report, he plans to found a digital marketing services company.

Former Microsoft CEO Steve Ballmer is a primary investor in the business.

Penn's departure could also have been predicted, given his close ties to Ballmer. After the former leader left Microsoft, it would have been difficult for Penn to form the same type of relationship with a new CEO. "It's my opinion that it would have been unusual for him to stay," said King. Penn's decision to proactively leave in favor of a Ballmer-financed project is fitting.

Microsoft also noted that executive Vice President Scott Guthrie will continue leading Microsoft's Cloud and Enterprise (C+E) division. The team's focus is on developing an intelligent cloud platform, but going forward it will also focus on building infrastructure and business services to help with business process management in security, data and analytics, and development tools.

As part of today's news, the Dynamics development team will be integrated with C+E. This will reportedly enable Microsoft to accelerate ERP and CRM projects, and bring them under the broader umbrella of C+E engineering innovation.

Kelly Sheridan is the Staff Editor at Dark Reading, where she focuses on cybersecurity news and analysis. She is a business technology journalist who previously reported for InformationWeek, where she covered Microsoft, and Insurance & Technology, where she covered financial ... View Full Bio
We welcome your comments on this topic on our social media channels, or [contact us directly] with questions about the site.
Comment  |
Email This  |
Print  |
RSS
More Insights
Webcasts
Cyber Attack Evasion Techniques
5 Steps to Integrate SAST into the DevSecOps Pipeline
More Webcasts
White Papers
6 Emerging Cyber Threats That Enterprises Face in 2020
[IDC Workbook] Best Practices for Cloud Security
More White Papers
Reports
How Enterprises Are Developing and Maintaining Secure Applications
2019 State of Privileged Access Management (PAM) Maturity Report
More Reports

I'm not so sure it's a good policy, as I think continuity and institutional memory are important to good decision making, and mutual loyalty is essential to the stability of any organization; but it is expected, and in any case, the expectation needs to be that the current board and CEO are in charge, and that efforts  by subordinate officers to undermine their authority are not to be tolerated.

I suspect an attempt to purge senior MS management of potential rivals, but I hope not, as a strong CEO doesn't need to protect himself in that way and a weak one shouldn't be allowed to (too easy to protect one's job by eliminating viable alternatives).  In the case of Stephen Elop, it may well be that he returned to MS in the expectation that he would succeed Steve Ballmer as CEO; but since he didn't get the job and Satya Nadella has endured this long, he has decided to look elsewhere for promotion opportunities.
Reply  |  Post Message  |  Messages List  |  Start a Board

Microsoft was one of the tech companies pioneering the use of customer feedback to influence product development.  They may not have gotten it quite rigth out of the gate but always was able to build and improve to customers' expectations resulting in profits.  Although the feedback has always been collected, the action on same has been missing for over a decade now, replaced by pure profit motives (or cost reduction) regardless of customers' needs or desires across almost all product lines from mobile to OS.  Replacing executives is not enough without a change in decission making.  So far things have been improving but it's still not where it needs to be.
Reply  |  Post Message  |  Messages List  |  Start a Board

Surprised these changes took so long -- MSFT does move at a glacial pace. Hope there will be more changes soon which represents new points of view and people with different skills

It was being expected since the new CEO's debut. Typically CEOs want to work with their own team. For a new chapter to begin, the old chapter has to be ended. I guess we'll see a few Indians in some of these slots. Indians are ruling the software world.
Reply  |  Post Message  |  Messages List  |  Start a Board
Editors' Choice
Hot Topics