Dropbox makes a play for the enterprise with new admin controls and plans for collaboration tools.

Dropbox: 7 Apps To Add On
(Click image for larger view and slideshow.)

The update lets users maintain two separate Dropbox accounts: one to store personal photos and documents, and another for business use and company-owned data. Users can access both via mobile or desktop. Dropbox CEO Drew Houston said the new version will alleviate problems that have long plagued many IT departments, such as employees saving company documents to their personal Dropbox accounts.

The new Dropbox for Business includes three updates that give IT more control over designated folders and content: remote wipe, account transfer, and sharing audit logs.

In cases where an employee leaves a team, admins can transfer that account to another team member to continue workflows. Admins can use this option either immediately or after the user has been removed, the company said. 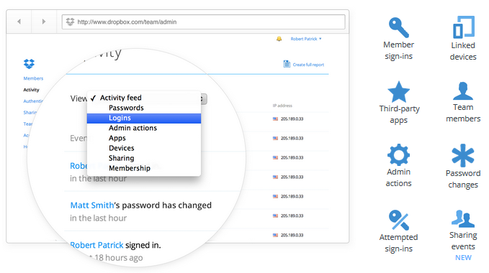 The last addition -- the sharing audit logs -- tracks how data is shared inside and outside the company. Admins can monitor shared folder and link creation as well as changes that employees make to shared folder and shared link permissions. Some of these features already rolled out in beta to select businesses.

Other changes to the new version of Dropbox for Business include updates to its desktop and mobile apps, notifications, APIs, admin console, and sharing controls.

With its business version, Dropbox enters a highly competitive market where rivals Box, Google, IBM, Microsoft, and others have already made their marks. Dropbox's consumer offering has around 275 million users who save about 1 billion files to the service every day, the company says.

Dropbox for Business launched in beta in November and retails for $15 per user per month for a minimum of five users.

Project Harmony works inside Microsoft Office tools such as PowerPoint and Excel to improve collaboration in documents and prevent situations in which two people are working on two versions of the same file, Houston said.

"A bunch of us have had this experience: You spend the afternoon in a file putting all the final touches on something and making it perfect, only to find out that someone 20 feet away from you was doing the exact same thing," Houston said during the press event. "You have this awful collision -- in Dropbox we call them 'Conflicts.' "

Houston noted the popularity of Dropbox's green checkmarks that indicate that a file is up-to-date. Project Harmony will move these checkmarks into a Microsoft Office document so you know you're working on the most up-to-date version.

You'll also see a pop-up alert when another user opens the file you're working on. Mouse over it to see if anyone else is in the file, and click their name to start a conversation, which is saved inside the document for future reference. When you click to save your changes in the document, Dropbox syncs them and updates the file automatically for all users.

Dropbox plans to add these collaboration features to Microsoft Office tools first, but others will follow.

Kristin Burnham currently serves as InformationWeek.com's Senior Editor, covering social media, social business, IT leadership and IT careers. Prior to joining InformationWeek in July 2013, she served in a number of roles at CIO magazine and CIO.com, most recently as senior ... View Full Bio
We welcome your comments on this topic on our social media channels, or [contact us directly] with questions about the site.
Comment  |
Email This  |
Print  |
RSS
More Insights
Webcasts
Key technology trends in 2021 - Making these technologies work for your business
Cybersecurity's Next Wave: What You Should Know
More Webcasts
White Papers
Why Add Security to Your Skill Set and How to Do It
Enabling Enterprise Resiliency Through Cyberthreat Detection
More White Papers
Reports
Accelerate Threat Resolutions with DNS
Enabling Enterprise Resiliency Through Cyberthreat Detection
More Reports

Dropbox adds Rice, tweaks its ToS and merges biz/personal folders. What other changes do ya'll anticipate ahead of their eventual IPO? (If any ...)

They still insist on people/business bringing their own security or encryption ... something in terms of a product or buy-out in that realm?

Yes, an interesting choice for sure -- though I'd wager a better one for a company looking to break into enterprises than other celebrity endorsers. (Lady Gaga, anyone?)
Reply  |  Post Message  |  Messages List  |  Start a Board

I was bemused by Dropbox adding Condoleezza Rice to its board. I get that they wanted a "name" but choosing Rice in this era of worry about government surveillance is tone deaf at best. I wonder how many companies will take this as a message and walk over to Box or one of the other approximately 459 other similar providers.
Reply  |  Post Message  |  Messages List  |  Start a Board

Dropbox is a little late to the game, especially having to contend with tools like Google Apps. The updates are fairly basic, as you said, but it'll be interesting to see what else is in its pipeline.
Reply  |  Post Message  |  Messages List  |  Start a Board

Not really, and the reason has less to do with my concerns with Dropbox and more to do with the fact that I've been able to do this sort of collaboration on projects like powerpoints for a long time with DriveHQ. It took Dropbox a long time to add a fairly basic service, but at least they've done a nice job of convincing people how cool it is with its flashy release.
Reply  |  Post Message  |  Messages List  |  Start a Board

Unfortunately we will be migrating from Dropbox over to Google Drive within the next few weeks and are unlikely to use Project Harmony. It has nothing to do with the product or cost and everything to do with the recent actions of Dropbox. There actions demonstrate a lack a committment to data privacy.

That Project Harmony/PowerPoint integration sounds pretty interesting for folks who are heavy creators of presentations. Does the new level of control ease your Dropbox concerns, IT leaders? Let's hear from you.
Reply  |  Post Message  |  Messages List  |  Start a Board
Editors' Choice
Hot Topics

More Informa Tech Live Events
Key technology trends in 2021 - Making these technologies work for your businessPeople Are The Most Important Part of Autonomous SOCHybrid Cloud: The Great Balancing Act