5 comments
Comment Now
Tweet
As the father of virtual school students, I see both the promise and the challenges of online education.

Soon, I plan to be an expert, or at least more of one, learning just-in-time and in many ways teaching myself by seeking out the people I want to learn from. Will that not be the wave of the future, for more and more of us? Journalism is like never leaving school in some ways. It's life-long learning and the accumulation of provisional expertise, which one hopes leads to greater wisdom over time.

My new gig is not such a great departure from my prior one leading our coverage of social business and collaboration technologies, given that Web collaboration is an element of the online education trend in both higher education and K-12 schooling. However, the cast of characters and array of vendors is pretty different, and there are a lot of people I need to introduce myself to.

One thing I bring to the job is a bit of experience. As I write this, my 12-year-old daughter, a virtual school student, is at the desk right next to mine in my home office, working on her computer with a set of headphones on. Actually, I just caught her watching something on YouTube when she was supposed to be doing schoolwork. (Back to work, kid!) In the family room, her twin brother is logging in to the Blackboard course management system to attend an online history lecture.

Both are enrolled in Broward Virtual School, a program of the Broward County Schools that operates as a franchise of Florida Virtual School. FLVS is frequently cited as a pioneering success story for online education. When our twins first enrolled in BVS as fourth graders, their curriculum was delivered under a contract between BVS and K12 Inc., a for-profit online school, because FLVS only covers middle and high school. K12 is the subject of some controversy because its aggressive expansion plans often put it in a position of undercutting public schools, and last fall it got slammed in an investigative report about skimpy teacher qualifications and excessive student-teacher ratios (sometimes as high as 275-to-1). However, our experience with the quality of its curriculum has been mostly positive, and my son took advantage of the option of remaining on the K12 curriculum into sixth grade because my wife thought it suited his learning style better.

My wife acts as their learning coach (and stern task master), with me as backup. I'm also responsible for technical support, which mostly means I'm the one everyone yells at when the wireless router stops working.

Because pictures of kids sitting in front of their computers are not particularly dramatic, my favorite virtual school photo is still one from early on in this adventure, when they were conducting a baking soda chemistry experiment in the kitchen. One of the things K12's program was good at was supplying home school science kits, safety goggles and all. 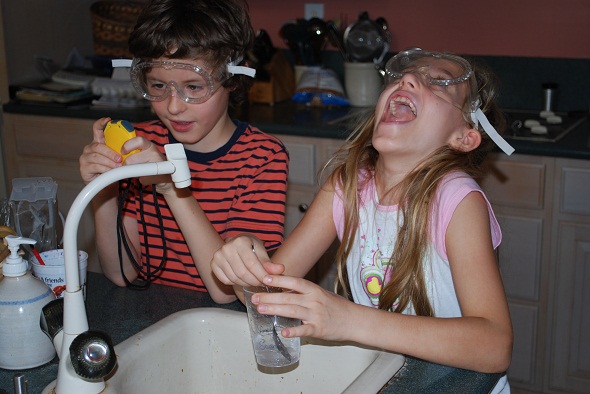 Mad scientists experimenting in the kitchen.

Notable BVS alumni include professional golfer Lexi Thompson, a 2012 graduate of the high school program, who at age 12 was the youngest person to qualify to play in the U.S. Women's Open. BVS provides remote education on a flexible schedule to meet the needs of athletes and musical prodigies with active travel schedules, as well as students who are too ill to attend regular school, but it also appeals to families like mine who are seeking a better education for their kids. My older daughter, now in college, also took a couple of Florida Virtual School courses, including one in art history that would not have been available to her through regular public high school.

The Florida legislature now mandates that all high school students take at least one virtual class prior to graduation, either from home or from a school computer lab. Although the school system has some logistical and "unfunded mandate" complaints about how to make that work, it does strike me as a good idea to give all kids at least some exposure to how online education works.

Does this mean I believe online education is the future? Not really, not by itself. When my wife and I first enrolled our twins in virtual school in 2010, we called our blog about the experience School of Last Resort because by this time we had churned through public, private, parochial and charter schools and were fleeing a charter school that we thought had lost its way. Maybe our standards are too high, or maybe we just have to do everything the hard way.

Although I would not claim we have found educational nirvana in my household, virtual school met a few key needs:

-- It let us assert more control over the quality of our children's education, without taking on the full burden of teaching them, as in traditional home schooling. They have a teacher for each class, albeit a remote one.

-- The kids are never left behind when they don't understand something. They repeat the material until they have mastered it. This is particularly important in subjects like math, where each level of mastery builds on the last. For all the talk about adaptive systems software that will sense each child's learning style, the infinite patience of a computer-based scoring system might be at least as important, at least for those topics that can be taught with a multiple choice test.

-- When our kids excel, they need not be bored waiting for the other children to catch up. If they're ready for high school material, they can take those courses even as middle school students.

The self-paced nature of the instruction is important, but not without limits. Because the school year calendar still must command some respect, my middle schoolers have been up past midnight more times than I care to count re-doing assignments that they didn't get right the first time and trying to catch up with the pace of their courses. Then again, there are days they get to sleep late, and even occasions where they get to pay an unscheduled visit to Disney World after getting ahead in their classes.

At the moment, we're pretty determined to stick with the virtual school program through the twins' middle school years and reevaluate as high school approaches. When people ask whether we're depriving our children of the socialization aspect of schooling, my wife confidently asserts that most of the social interaction in school is negative, thinking of all the bullying, vulgarity and violence. I will admit to wondering if learning to cope with those things isn't in itself a valuable or at least necessary experience they're missing out on, leaving them outside the mainstream of their peers. Yet there are clearly some middle school horror stories we could live without. So we pack their schedules with extracurricular activities assumed to be more positive, such as scouting, church choir and swim team, and complain about how much time we're spending shuttling them between events.

Virtual school is revolutionary, but it's hard to see it as the revolution our public schools really need. For a family like mine, with a work-at-home mom and dad, sure, but not everyone can do that or would want to. Ultimately, the best elements of online education will need to make their way into our regular neighborhood schools and be used, judiciously, where they make the most sense.

When I sat down with BVS principal Christopher McGuire recently, following a school advisory committee meeting, he readily agreed that virtual school is not the future. But it is part of the future and a place to practice the use of technologies that will find their way into the classroom of the future. In fact, it's already starting to happen. Another part of the operation he oversees, the Broward Education Communications Network (BECON) TV program, produces online and video educational materials for classroom use as well as remote education.

McGuire is the one who advised me to read Disrupting Class, the book on innovation in education by Clayton Christensen. That book focuses on the K-12 grades, although he has also written about how the same trends will play in higher education. Christensen is best known for The Innovator's Dilemma, which describes a pattern in which innovators in one generation of technology fail to see the potential of the next generation -- which tends to sneak into the low end of the market as an alternative too marginal to take seriously as a threat. In this way, for example, Digital Equipment Corp. for a long time dismissed the potential of PCs that were mere toys compared to its minicomputers and offered too little profit compared with the established technology. PCs started out as an alternative to nothing -- computers for people who otherwise would not have convenient access to any computing power at all -- then steadily gained capabilities to become a major market force.

In the same way, he predicts that innovation in education technology will appear first at the fringes -- as it is today in virtual K12 education or massive open online courses (MOOCs) in higher education -- and will be dismissed by the mainstream while it is going through its growing pains. Yet ultimately some permutation of the technologies and techniques incubating on the margins will overtake and become the mainstream. Because institutions generally don't "disrupt themselves," those who want to ride the wave of disruptive innovation and remain relevant need to spawn an independent division motivated to pursue new ideas rather than preserve the status quo, according to this theory.

When the Florida Virtual School was established by former Gov. Jeb Bush and a Republican-led legislature, its leaders were allowed to write their own ticket, insulating the venture from institutional pressures such as the influence of the teachers' union. The Broward County schools probably never would have taken this leap into the future on its own, but with FLVS proving the worth of the model, BVS was created to show that it could work as well or better within the county school system and with union teachers. This is an encouraging trajectory and gives me hope that every child in the county will have access to the best elements of this program someday soon.

We welcome your comments on this topic on our social media channels, or [contact us directly] with questions about the site.
Comment  |
Email This  |
Print  |
RSS
More Insights
Webcasts
The Threat From the Internet - and What Your Organization Can Do About It
Enabling a Smooth DX Transformation in the Post-Pandemic New Tomorrow
More Webcasts
White Papers
Get The Key to Cloud Success
Automate Testing Using MITRE ATT&CK with Verodin Security Validation
More White Papers
Reports
The State of IT Operations and Cybersecurity Operations 2020
Global Cloud Proxy Enables VPN Split Tunneling
More Reports
Copyright © 2020 UBM Electronics, A UBM company, All rights reserved. Privacy Policy | Terms of Service