The half-inch laptop steps up the competition with Apple's MacBook Air and other thin-and-light notebooks.
Antone Gonsalves
Contributor
November 05, 2009
Dell on Thursday launched the thinner Adamo XPS, which is less than a half-inch thick and is designed to compete with Apple and other makers of high-end, thin-and-light laptops. 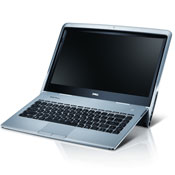 The new laptop, priced starting at $1,799, is the second product in Dell's Adamo line, aimed at people looking for a mobile PC that offers style and performance in an ultra-portable form factor. The latest system is 0.4 of an inch thick, has a 13.4-inch high-definition display and full-size keyboard, and weighs slightly more than three pounds.

The Adam XPS is Dell's latest challenger to other players in the highest-end of the market for thin-and-light notebooks, which include Apple's MacBook Air and Sony's Vaio Z series. The Air is 0.16 of an inch thick at its thinnest point, but tapers to 0.76 of an inch at its thickest point. The Vaio Z series is about an inch thick.

The Adamo XPS includes 4 GB of DDR3 memory, a 128 GB solid-state drive and a 1.4 GHz Intel Core 2 Duo processor. The computer maker dresses up the system in a black, jewelry box-like case and comes with built-in Wi-Fi and two USB ports. The Adamo XPS will ship with Microsoft Windows 7 64-bit edition. Dell plans to start selling the system in time for the holiday-shopping season.

Computer makers targeting the highest-end of the thin-and-light PC category are trying to differentiate the systems with stylish designs, as well as performance, battery life, size and weight. Heavier and less stylish systems at less than half the price are available from other manufacturers, such as Asus, Acer and Hewlett-Packard.

Computer makers offering thin-and-light notebooks at the low-end of the market are positioning the systems as alternatives to netbooks, mini-laptops with 10-inch screens and less than full-size keyboards. While netbooks cost as little as $300, they lack the performance and capabilities of the larger laptops, which start at roughly $600. For computer makers, the larger systems carry bigger profit margins.

InformationWeek Analytics outlines the 10 questions you need to ask to see where netbooks fit within your organization. Download the report here (registration required).