Private companies have conditioned us to expect instant response and services, so we expect that from government agencies, too. But government doesn't always have the same funding that private companies do. Here's how these enterprises are addressing their digital transformations.

If you think digital transformation is tough inside your enterprise organization, consider the challenges that governments have when it comes to updating legacy systems and delivering fast, digital services to citizens.

"I don't think anyone in here would say 'I think my local government should collect more in sales and property taxes in order to use social media more effectively,'" said Jeff Stovall, CIO of Charlotte, North Carolina, during a panel discussion of government CIOs, Kickstarting Digital Transformation in Government, at Interop ITX this month. 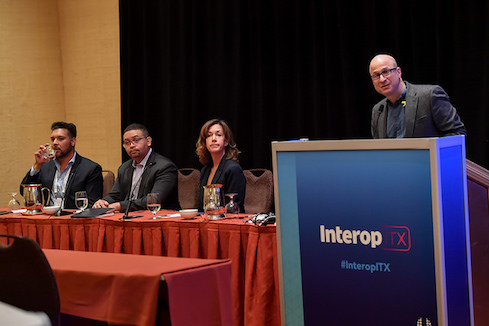 "There isn't the ability for government to monetize technologies the same way they can in the private sector, but there's absolutely the expectation that government will have [technological] capabilities that are on par."

Capabilities that are on par mean, in part, that these services are delivered at the speed of the marketplace. Consumers have been conditioned to expect instant services. For Charlotte, increasing the speed of its response can play an important role. For instance, Stovall said, a year and a half ago Charlotte had a police officer-involved shooting that sparked protests organized via social media -- enabling those protests to be organized much faster than they had been in the past. Listening to social media could help police better predict the size of a given protest and how many personnel and what equipment to send, Stovall said. "Maybe not just cars, but maybe people with shields," he said.

The panel, moderated by Jonathan Feldman, CIO of Ashville, North Carolina, and featuring Stovall, along with Cary, North Carolina CIO Nicole Raimundo and Network Engineering Branch Chief for the US General Services Administration Roberto Rosales, focused on how to deliver the services and responsiveness that citizens have come to expect with the infrastructure and budgets of governments.

"The expectation of our citizens is much higher now in terms of turnaround of services," said Raimundo, who notes that her city is home to a high density of PhD holders from local universities and tech companies. Her city still operates a mainframe, but it is also offering services via Waze, text messages, and an Amazon Alexa skill.

To spur innovation, Raimundo worked with the town manager to get the whole staff involved -- not just IT. Cary held internal hackathons to generate new ideas, and the town worked with partners throughout the organization.

"We have a mainframe, but we also have a skill in Amazon Alexa," she said. "You really can operate in both worlds, but you've just got to start."

Digital transformation at the General Services Administration includes an IoT and data analytics effort, according to Rosales.

Rosales said that the General Services Administration owns 95% of all federal property and is in the business of leasing those facilities to other agencies. As part of its digital transformation effort the agency has been partnering with its construction contractors to build smarter buildings. It has also been retrofitting existing buildings with things like smarter lights and sensors to get better insights into its energy consumption and water consumption.

That's information that he can then put in the hands of those who make policy decisions.

Raimundo recommended starting small and doing something incremental and then sharing those results. "You can't start with something big," she said. "Don't make something that is perfect. Think in terms of minimum viable product."

She also said her IT organization partners with local universities and businesses. They have invited businesses in to install their equipment and then use the town as an example of how it works. "They can bring customers in and show them what this tech looks like in the real world," she said. "My suggestion is to think creatively and start small."

Rosales said that many of his agency's projects start with mandates that come with funding already. But he added that for other projects he's had luck partnering with other agencies who are working on the same thing. Through the partnership, they get additional personnel resources and his agency gets the technology.

One of Stovall's key strategies is "the big dog theory. If you don't know who the big dog is in your community, just pull out the budget and see who gets the most money." In Charlotte, that's the police, Stovall said.

"So if I want to get things done the first thing I need to do is for us to get on the same page with the police chief -- find out what he needs to get done and do what I can to contribute," he said. "Maybe your big dog is the city manager or the mayor. It's who has the open doors and open coffers for funding and can offer endorsements to further expand your influence, which is critical."

Jessica Davis is a Senior Editor at InformationWeek. She covers enterprise IT leadership, careers, artificial intelligence, data and analytics, and enterprise software. She has spent a career covering the intersection of business and technology. Follow her on twitter: ... View Full Bio
We welcome your comments on this topic on our social media channels, or [contact us directly] with questions about the site.
Comment  |
Email This  |
Print  |
RSS
More Insights
Webcasts
People Are The Most Important Part of Autonomous SOC
Nip Ransomware in the FUD: Detecting Attacks Pre-Encryption
More Webcasts
White Papers
Supercharge Incident Response with DDI Visibility
MontanaPBS Shifts to Agile Broadcasting with Help from Raritan KVM Solutions
More White Papers
Reports
Trustwave Global Security Report
Special Report: Edge Computing: An IT Platform for the New Enterprise
More Reports