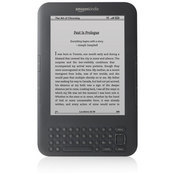 Amazon Kindle Wi-Fi + 3G
Amazon says the latest Kindle models are the fast-selling ever, with the number of orders being placed during the first four weeks of availability surpassing that of previous generations of the e-reader.

In addition, the online retailer said it has started shipping the new Kindle to customers Wednesday, two days earlier than expected. People who order the device today shouldn't expect it to ship until mid-September.

Amazon has never said how many Kindles it has sold, and it didn't release sales numbers for the latest generation. However, the company said the e-reader is continuing its more than two-year run as the bestselling product on Amazon.com.

The popularity of the Kindle reflects the shift in the publishing industry from physical books to digital versions. Amazon in July reported that unit sales of e-books surpassed that of hardcover books.

In following the trend, e-reader makers are dropping the price of the devices to get more of them in the hands of readers. With the latest Kindle, Amazon slashed the price of the standard model, which can download content from Amazon over AT&T's 3G network at no charge, to $189 from $259. The vendor has also introduced a Wi-Fi-only model for $139.

Amazon's price cut came just hours after rival Barnes & Noble announced it was dropping the price of its Nook 3G e-reader to $199. Other e-reader vendors that have dropped prices include bookseller Borders and Sony.

Besides trying to entice new buyers, vendors are cutting prices in order to position e-readers as a far less expensive alternative for reading books and magazines than the emerging category of tablet-style computers, such as the Apple iPad.

The latest Kindles have several improvements over previous generations. While the size of the screen remains six inches diagonal, the display is based on manufacturer E Ink's latest technology, which offers a contrast ratio about 50% greater than the older Kindles. While the screen only displays black-and-white, its high resolution makes it possible to read text even in direct sunlight, an advantage over the LCD displays used in the iPad and smartphones.

In addition, Amazon has made the Kindle 21% smaller through a sleeker design and has reduced the weight by 15% to 8.7 ounces. The latest models have a battery life of a month and twice the storage, which is enough to carry up to 3,500 digital books.