Google's board chairman offers an in-depth tutorial to help smartphone owners ditch their iPhones for Androids.

With consumers primed to begin their holiday shopping in earnest this week, Google's chairman, Eric Schmidt sat down and wrote a post Sunday on Google+ explaining why and how iPhone users should put down their iDevices in favor of smartphones running Android. Eric's Guide offers step-by-step instructions -- in just 15 short bulleted points -- outlining how easy it is to make the switch.

"Many of my iPhone friends are converting to Android," said Schmidt. "The latest high-end [Android] phones have better screens, are faster, and have a much more intuitive interface. They are a great Christmas present to an iPhone user! Like the people who moved from PCs to Macs and never switched back, you will switch from iPhone to Android and never switch back as everything will be in the cloud, backed up, and there are so many choices for you."

Schmidt's not wrong. Choice abounds in the Android ecosystem. Devices range from small to large, from cheap to pricey, and from manufacturers near and far. At last check, analyst firms pegged worldwide adoption of Android at about 80%. iOS's share of the market is closer to 12%.

Android can thank the diversity of hardware and software experiences for its success around the globe. There are only three iPhones available, the new iPhone 5s and 5c, and the outdated iPhone 4S. All three feature the exact same user interface and software, meaning the experience is homogenous no matter which device you pick. That can be either a weakness or an advantage, depending on your point of view. 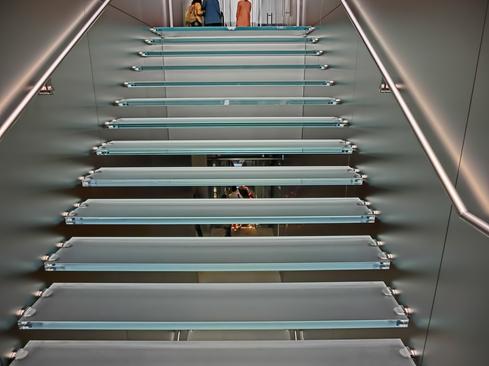 There's no shortage of irony in Schmidt's guide on how to switch, however. According to him, setting up a new Android device requires at least 15 steps (four major steps, with a handful of substeps) to get Gmail, contacts, and calendar synced, as well as set up music accounts and transfer photos. His entire post is more than 900 words long.

At one point, Schmidt wrote, "If [your] old [iPhone] photos are important, send them to Gmail [from your Mac] and download into the Android phone or upload them to Google+." Because that's so intuitive. (It's interesting that Schmidt assumes all iPhone users have Macs, as he doesn't offer any advice to help PC owners on how best to switch.) Schmidt doesn't say anything about switching from an iPad to a Nexus 7 or Nexus 10. Perhaps that post is scheduled for Tuesday?

We welcome your comments on this topic on our social media channels, or [contact us directly] with questions about the site.
Comment  |
Email This  |
Print  |
RSS
More Insights
Webcasts
Building the SOC of the Future: Next-Generation Security Operations
Making Cybersecurity Work in Small and Medium-Sized Businesses
More Webcasts
White Papers
Ahead of the Curve: Accelerate Cyber Response with DNS Insights
Universal Internet Connectivity: Reality or Myth?
More White Papers
Reports
2021 Top Enterprise IT Trends
DNS Network Traffic Volumes During the 2020 Pandemic
More Reports

Admittedly, I've been sucked into the Apple ecosystem, all starting with the first-generation iPod I got in high school. Lorna is right -- it all depends on who owns your data and whether you're happy with them. I can't imagine switching to an Android phone after all these years, though I know plenty of people who have and are happy enough with their decision.
Reply  |  Post Message  |  Messages List  |  Start a Board

McDonalds sells about 6.5M hamburgers a day--far and away beyond any of their competitors.

I guess your opinion is that McDonalds makes the best hamburger in the world.
Reply  |  Post Message  |  Messages List  |  Start a Board

I love Google (or used to) but I despise Eric Schmidt.

Wonderful cheap shot he takes at Safari at the end for supposedly being less secure than Chrome. Huh, considering that 95% of Chrome is the same as Safari (thanks to Apple's open source Webkit which Google is using to power Chrome) that seems like a dubious claim to me.

Besides that fact, browsers would be a lot more secure if companies like Google weren't actively using unscrupulous techniques to get around browser security (go look it up--Google just paid a massive fine for doing exactly that.) Gee, Mr. Schmidt. Maybe you should just tell everyone to avoid Google if they want their browser to be more secure, huh?

What a tool this guy is and I'm sick of seeing his face everywhere. Google used to be the dream shop of awesome geeks doing cool things but they turned into a giant corporate advertising and marketing behemoth that does everything in a Microsoft-like half-baked way nowadays. I used to be the biggest Google fan on the planet until this nattering suit came along and ruined it.
Reply  |  Post Message  |  Messages List  |  Start a Board

It all comes down to your content -- which vendor has your stuff, Apple or Google? Are you OK with what it charges for your stuff? Are you satisfied with how it protects your stuff, and your privacy? Does the hardware function well enough?

If you answer yes to most of these questions, I'm not sure switching is worthwhile. But if you're unhappy, don't wait: As with moving in the physical world, the more stuff you accumulate, the harder it is to start over somewhere else.
Reply  |  Post Message  |  Messages List  |  Start a Board

Schmidt wrote, "If [your] old [iPhone] photos are important, send them to Gmail [from your Mac] and download into the Android phone or upload them to Google+." Because that's so intuitive. (It's interesting that Schmidt assumes all iPhone users have Macs, as he doesn't offer any advice to help PC owners on how best to switch.)

I used to own a Droid, currently own an iPhone4S and am due for an upgrade in February. I don't have Mac but I think I could figure out how to upload my iPhone photos to my PC. Still, Schmidt's assumption about the Apple brand is revealing.

Disclosure: I am of the uncool baby boom generation which is seems to be in the vanguard of iPhone devotees. Tell me why I should switch back to Android.
Reply  |  Post Message  |  Messages List  |  Start a Board

900 words oh my. I guess for Iphone users who are simple in mind that might be hard. 80% of the world uses a android phone now. Iphone or icon phone can go bye bye. Everytime I show my phone to a iphone user they say wow. You can see in there eyes they can only grasp using icons and they say the android phone is better but just to hard.
Reply  |  Post Message  |  Messages List  |  Start a Board
Editors' Choice
Hot Topics