The Surface Pro 3 is the first Microsoft tablet to offer more than the sum of its parts.

I've been using Microsoft's Surface Pro 3 for a little more than two weeks, and although it's not perfect, it improves on its predecessors by an epic margin. It's the only Surface model -- in fact, one of the only Windows 8.1 hybrids -- that's left me with a sense of unique potential, rather than compromise.

To be clear, the Surface Pro 3 isn't without its compromises. That's true of virtually any product, but Microsoft advertises the Pro as a replacement for both tablet and laptop, so the point bears mentioning: There is no ideal, all-in-one computing device. With a 12-inch screen, the Pro 3 balances tablet and laptop quite well -- but if you prefer tablets you can hold one-handed, or the stability of a traditional laptop, hybrid designs probably aren't for you. 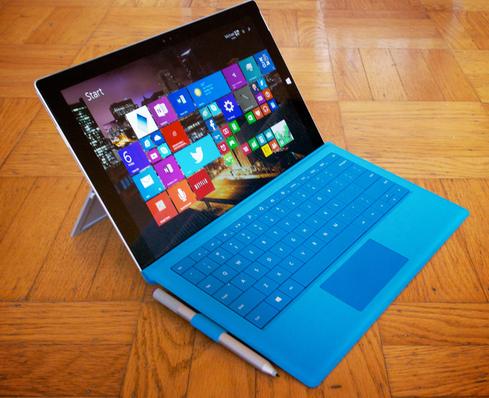 Even so, the Pro 3 provides an intriguing fusion of possible uses. It is, minus a few quibbles, an excellent laptop that compares well with other premium-priced models. In tablet mode, the device will never be mistaken for an iPad, but the new Surface Pro Pen offers appeals of its own. Earlier Surfaces tried to differentiate themselves by being laptop-like tablets; they weren't about new computing experiences as much as the retrofitting of old ones. The Pro 3 maintains that strategy, but with the pen, it also enables new user experiences oriented around touch and mobility.

Perhaps most impressively, the device feels more cohesive. Most hybrids have a Frankenstein-like quality, in which concessions made for one use create deal-breaking problems in others. Earlier Surfaces' 16:9 screens, for instance, helped them accommodate a full keyboard in laptop mode but rendered them awkwardly narrow in tablet mode. Thanks both to its thinness and a new 3:2 aspect ratio, the Surface Pro 3 switches between modes in a more fluid, sometimes even chameleon-like way. 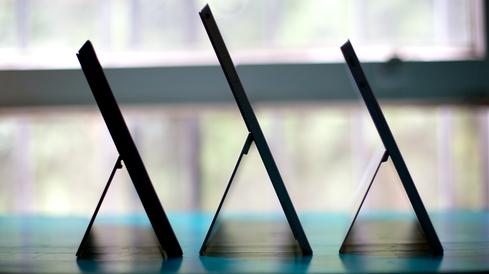 Build quality
All Surfaces, even the misbegotten Surface RT, have boasted impressive manufacturing. The Pro is no different, with a strong, magnesium frame, and a Gorilla Glass-fortified screen to protect against drops. It feels like a premium product from the second you pick it up.

Thin and light
Earlier Surface Pros were fairly chunky, but the Pro 3 is a sexy, sleek piece of industrial design. When it starts shipping later this month, it will be the thinnest Intel Core-based device ever to reach the market, only 9.1mm thick. Devices based on Intel's next-generation Broadwell chips will be thinner, but they won't be available until the end of the year.

The Pro 3 is also fairly light at 1.76 pounds -- not as light as the 1-pound iPad Air, but not much heavier than the 1.46-pound iPad with Retina display. Given that the Surface Pro 3 offers a 12-inch screen to the iPad's 9.7-inch one, it balances the extra weight very well. The screen's 3:2 aspect ratio helps here; it makes holding the Surface Pro 3 feel like holding a legal pad. You won't want to hold it one-handed for hours like you can an iPad Mini, but it still handles well.

The screen itself is gorgeous. The bigger screen gives the Pro 3 laptop-like real estate, and the 2160 x 1440-pixel resolution displays more desktop

content at default scaling than a 13.3-inch MacBook Air. In fact, as someone who's used the Air extensively, I didn't find the Pro 3's somewhat smaller screen to be a disadvantage.

Infinitely adjustable kickstand
The Surface Pro 2's two-step kickstand made it fairly easy to orient the device for lap use, but the Pro 3 takes it to a new level. Its kickstand is infinitely adjustable, allowing you to find just the right angle for any activity, whether it's watching Netflix in bed, drawing with the Pro Pen, or typing on your lap. 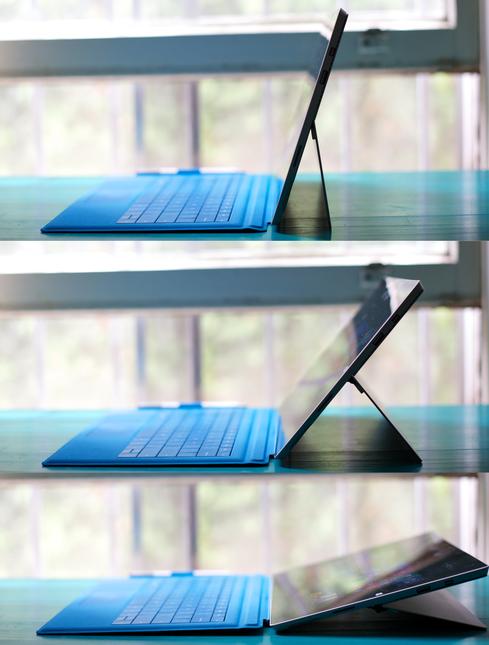 The Surface Pro 3's kickstand is a major improvement.

Some reviewers have complained that configuring the Pro 3 for lap use requires more lap space than many people possess. I haven't had that problem, but I'm also 6' 3". I asked a few shorter friends to try, and they were also untroubled. Still, this is a subjective point, and if you're concerned, you should check out the device in person.

New Type Cover
The new Type Cover is physically larger than previous models, but the keys themselves are the same size as before. A lot of the extra space goes to a dramatically improved track pad. Earlier Type Cover track pads were there mostly for show, but the new one is not only usable but well above average. It doesn't match Apple's standard-setting tech, but the Pro 3's track pad is more than fine. 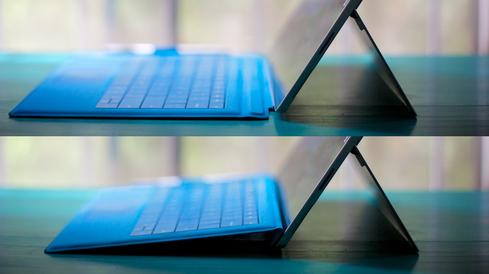 The new Type Cover can fold toward and magnetically connect to the Surface Pro 3's body, providing more stability for lap use.

The new keyboard is more rigid, and it can fold into and magnetically lock with the base of the tablet. The result is a much more stable laptop experience. I also like that the Pro 3 is compatible with earlier Type Covers, even if they look a little ridiculous when attached to such a large tablet. 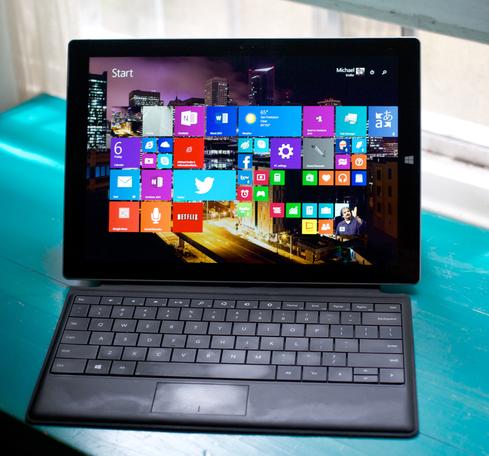 It looks a little silly, but Surface Pro 3 is compatible with earlier Type Covers.

The pen
The pen could be a blockbuster feature. It feels solid in the hand, and thanks to the Pro 3's thin optical stack, there is no parallax effect; when you write, the stream of digital ink keeps up with the tip of the pen. The Pen uses N-Trig technology that actually senses fewer degrees of pressure than more-common Wacom styluses, but it doesn't seem to matter; it's the most organic digital pen experience I've ever had. 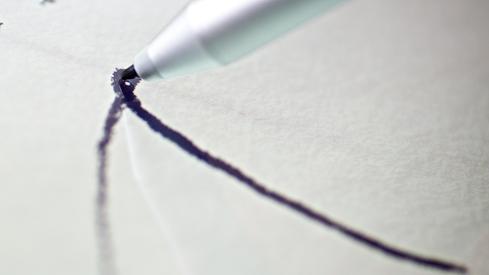 The pen is also wonderfully integrated with OneNote. If you push the pen's top button while the Pro 3 is asleep, the device wakes directly into OneNote. It doesn't require you to authenticate and instead lets you immediately begin jotting down your thoughts, before inspiration has had a chance to fade. You can also automatically sync these notes to OneDrive. I've found this extraordinarily useful, especially when I have a thought while on the go. I've also found that the pen makes art apps, such as Microsoft's Fresh Paint, much more engaging.

I'm tempted to say the pen might be reason enough for some to buy the Pro 3, but I hesitate for two reasons: The same pen technology will show up in other devices before long; and we won't see pen-optimized apps, such as Photoshop, until later this year, making it unclear how powerful the pen will ultimately be.

Now for the device's drawbacks.

The Pro 3 is priced like a MacBook Air but the keyboard is still sold separately. Microsoft has tried to justify this strategy with some nonsense about letting

customers choose their preferred Type Cover color. Fine, whatever. The point is, the keyboard is necessary, and the cheapest Pro 3 + Type Cover combination is $930. I like Microsoft's new tablet, but that's steep. 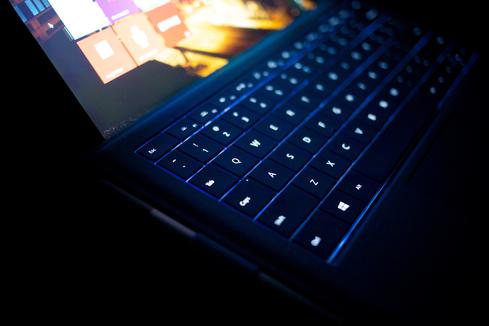 Microsoft's Type Cover is better than ever. Unfortunately, it's still sold separately for a pricey $130.

Although it's called a "Pro," in terms of computing power, Microsoft's newest tablet is more like a MacBook Air. If you want discrete graphics cards, the fastest chips, and plenty of RAM, you'll have to look elsewhere. That said, I've thrown a fair amount of Lightroom and Photoshop work at the Pro 3. It handled RAW images files well, and I rarely felt slowed down by the machine. Its fan came on often, but the device only felt warm, never hot.

I found it easy to accidentally activate the buttons on the pen's body. They provide erase and right-click functions, and it's pretty disruptive when you accidentally engage one while writing. 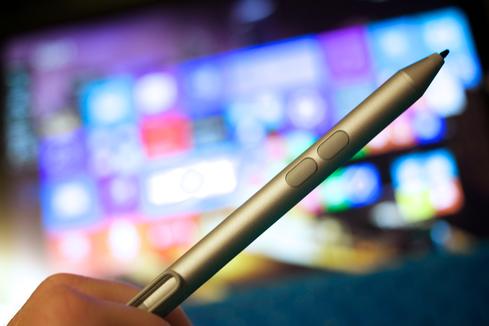 The Surface Pro Pen is ergonomically superior to other styluses, but its buttons sometimes get in the way.

At least one artist who reviewed the device complained that while drawing, he inadvertently hits the repositioned Start button, which sits on the right bezel. I've experienced the issue a few times, but I like that the Pro 3 knows to ignore my palm if it hits the screen while I'm using the Pen.

Though a dramatic improvement, the new kickstand also demands constant fiddling. I found it distracting at first; you can just open up a MacBook Air and start working, so setting up the Pro felt comparatively tedious. After a little use, I developed a better feel for orienting the device and don't really consider it a problem anymore. Your mileage may vary, of course.

Laptop power users might also be disappointed in the Surface Pro 3's lone USB 3 port. True, iPads don't have any such ports, but most Pro notebooks have several.

The Surface Pro 3 has only one USB 3.0 dock-- more than an iPad, but fewer than most Pro laptops.

Ultimately, it's both necessary and myopic to discuss the Surface Pro 3 relative to the competition. Microsoft encouraged some of the comparisons, and would-be buyers looking to get the most for their money are of course going to consider several different options. Still, for the first time, Microsoft has produced a device that is more than the sum of its parts. A few months ago, if someone had told me he wanted to spend $1,000 on a laptop, I would have recommended a MacBook Air or a traditional Windows laptop without ever thinking of a Microsoft Surface. Now, that's not necessarily the case.

Michael Endler joined InformationWeek as an associate editor in 2012. He previously worked in talent representation in the entertainment industry, as a freelance copywriter and photojournalist, and as a teacher. Michael earned a BA in English from Stanford University in 2005 ... View Full Bio
We welcome your comments on this topic on our social media channels, or [contact us directly] with questions about the site.
Comment  |
Email This  |
Print  |
RSS
More Insights
Webcasts
Disaster Recovery/Business Continuity in the New Normal
4 Practical Tips for Building a Data Lake
More Webcasts
White Papers
Why You're Wrong About Operationalizing AI
2021 Digital Transformation Report
More White Papers
Reports
Cloud Misconfiguration Mayhem
The State of CCPA 2021
More Reports
Copyright © 2021 UBM Electronics, A UBM company, All rights reserved. Privacy Policy | Terms of Service