Solo thinks for itself, looking to make flying drones to capture video much easier.

In a video that riffs on the opening scene of Stanley Kubrick's 2001: A Space Odyssey, 3D Robotics on Monday introduced its Solo drone as "the world's first smart drone."

3DR's video underscored the intelligence of the company's drone by having it piloted by a baboon, a playful reference to 2001's simian stars. The message is simple: Solo is so smart that even a monkey could fly it.

It probably isn't smart enough just to avoid annoyed animals. Chimpanzees, hawks, kangaroos, and rams have all shown that they're capable of knocking a drone out of the sky, given the opportunity. Humans -- known to throw things at drones -- are not alone in their appreciation of privacy.

Still, the Solo, starting at $999 and shipping May 31, has the sort of intelligence a drone operator can appreciate: It's obedient. Capable of carrying a separately purchased GoPro video camera, Solo can take off and land automatically. It can return home automatically and hover at the press of a pause button. It can execute pre-programmed, GPS-guided flight paths -- following a line or circling a point -- to capture professional-looking aerial footage. It has a follow mode, for those times when a single selfie isn't enough. 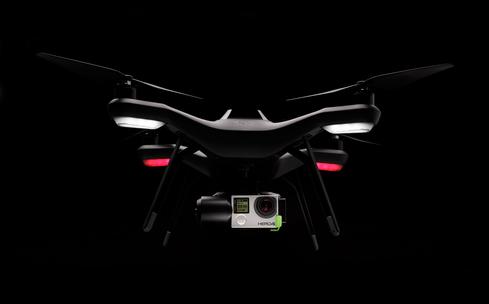 [ Want to hear directly from 3D Robotics CEO Chris Anderson on why IT should care about drones? Hear Anderson at the InformationWeek Conference April 27 in Las Vegas. Register now. ]

With the optional $399 Solo Gimbal -- for three-axis computer control of the GoPro camera through the controller -- Solo has the right stuff to capture aerial video and images far more affordably than you could by filming from a helicopter. It also supports open source DroneKit apps, for those who want to code their own flight routines.

The Solo and its controller each include a 1GHz ARM Cortex-A9 chip running Linux. Both promise to be easy to update through a smartphone app. The controller includes an HDMI port, which can be connected to an HDMI monitor to display a live video feed. It communicates with the Solo over WiFi at a range of up to half a mile.

In February, the FAA unveiled proposed new rules for commercial drone use (4.4 to 55 pounds), something the business community and tech entrepreneurs have been eager to see ironed out. If the rules are approved, the FAA will not require drone operators to possess a pilot's license, but will demand that they register their drones, pass a written test, and pay a $200 fee to engage in commercial drone use. The draft rules, which also require that drones remain visible to the operator, are not expected to be finalized until 2017.

In the meantime, the FAA has been granting exemptions to current rules prohibiting commercial drone use on a case-by-case basis. And there have been many such requests from businesses that see a market for aerial photography. The agency expects some 7,000 businesses will obtain drone permits over the next three years.

Last week, the FAA gave Amazon.com a two-year exemption to test drone-based package delivery. However, the requirement that Amazon conduct flights over private property suggests that opportunities for drone-based delivery may be scarce, even after the new rules are approved.

Thomas Claburn has been writing about business and technology since 1996, for publications such as New Architect, PC Computing, InformationWeek, Salon, Wired, and Ziff Davis Smart Business. Before that, he worked in film and television, having earned a not particularly useful ... View Full Bio
We welcome your comments on this topic on our social media channels, or [contact us directly] with questions about the site.
Comment  |
Email This  |
Print  |
RSS
More Insights
Webcasts
People Are The Most Important Part of Autonomous SOC
Nip Ransomware in the FUD: Detecting Attacks Pre-Encryption
More Webcasts
White Papers
The Psychology of Cyber: How Micro-Drilling Enhances Crisis Response
Improving Security by Moving Beyond VPN
More White Papers
Reports
Gartner Market Guide for Insider Risk Management Solutions
How Data Breaches Affect the Enterprise (2020)
More Reports

Although that's still a near $2,000 purchase for all of the kit involved, it's starting to become possible for end users to get access to some of the really exciting drone technology out there. It's not something I'll have the money for tomorrow, but it's certainly something I'll be considering before long.
Reply  |  Post Message  |  Messages List  |  Start a Board

The promise of affordable aerial shot for lower budget films is a point in it's favor. However does anyone else find the stalker capability of these things a little unsettling? Who's to say the one being followed wants the video footage? The FAA is coming up with rules on who get to fly these things. Is anyone coming up with privacy rules?
Reply  |  Post Message  |  Messages List  |  Start a Board

Our privacy rules can't cope. Things people take for granted, like the presumption of privacy in one's back yard, no longer hold true when a telescopic lens hoving over public land can see everything. And anyone "innovating" doesn't want to be bound by rules.
Reply  |  Post Message  |  Messages List  |  Start a Board
Editors' Choice
Hot Topics